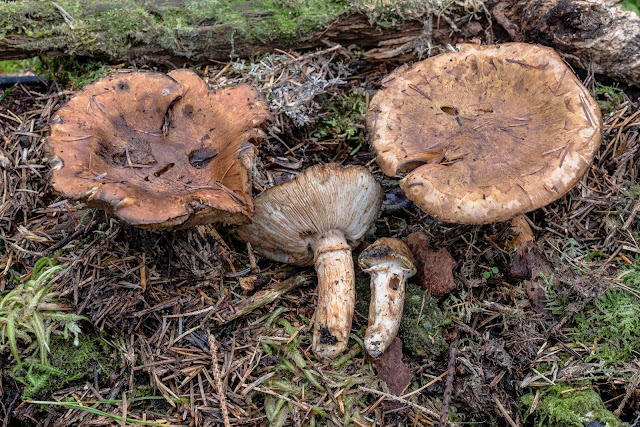 Tricoloma focale in a conifer plantation near Rhigos (14/11/16)

I tentatively identified these fruiting bodies in 2016 as Tricholoma focale, but sent a dried specimen, some photographs and a spore print to Martyn Ainsworth in Kew for DNA sequencing. Martyn informed me today that the DNA from my samples matches that obtained from the neotype of Tricholoma focale (Heilmann-Clausen (2017): Persoonia, 38: 38-57), which is great news. Tricholoma focale is very rare in Britain and largely confined to Pine Woods in Scotland and was believed to be extinct in England and Wales There have been a few records for South Wales recently, but this is the first that has been confirmed by molecular analysis and, as such, has been accessioned into the Kew collection. It is a very notable addition the mycoflora of our conifer plantations.
Many thanks again to Martyn and his team at Kew who do an amazing job.
Posted by Charles Hipkin at 19:31 5 comments:

The Glamorgan Fungus Group Facebook pages recently highlighted the occurrence of the small and easily overlooked fungus Bartheletia paradoxa, which occurs on fallen leaves of the Maidenhair-tree Ginkgo biloba. As we happened to be 'sort of passing' a tree I remembered seeing in Swansea Univerity Botanic Gardens, I couldn’t resist stopping to gather a few leaves in  yesterday's downpour. Back home, once dried out, many leaves displayed an attractive leopard-spotted pattern with associated tiny fruiting bodies. 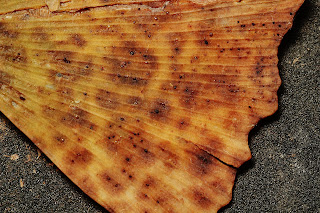 In addition to the university tree I have only ever recorded the three other trees in the Swansea area:
Singleton Park (2.22m gbh) SS6313192143
Singleton Park (2.02m gbh) SS6294992415
St James Gardens, Swansea SS643930
If anyone knows of additonal Maidenhair-trees in our area, please do let me know and/or check for this fungus.
Posted by Barry Stewart at 07:54 5 comments: 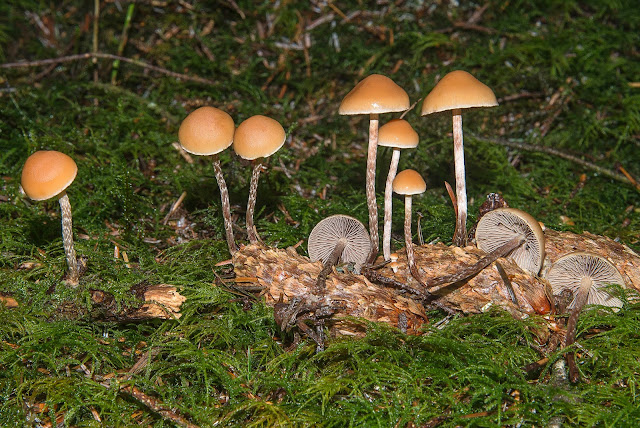 Snakeskin Brownie (Hypholoma marginatum, also known as Hypholoma dispersum) is a fairly common toadstool in local Sitka Spruce plantations although it is generally uncommon in Europe as a whole. It gets its fabulous common name from the characteristic snakeskin pattern on the stipe. Given its preferred habitat, often growing on buried wood litter or wood debris among mosses, and its characteristic morphology, it is not usually difficult to identify.
In the autumn of 2016 Hilary and I came across 3 populations of a fairly distinctive toadstool in Neath Port Talbot and Rhondda Cynon Taff composed of fruiting bodies clustered in large numbers on conifer wood debris or wood chips. All were in conifer plantations at the side of forest roads but outside the forest. A photograph of part of one population growing on Sitka wood chips in the Maerdy Plantation (RCT) is shown below. 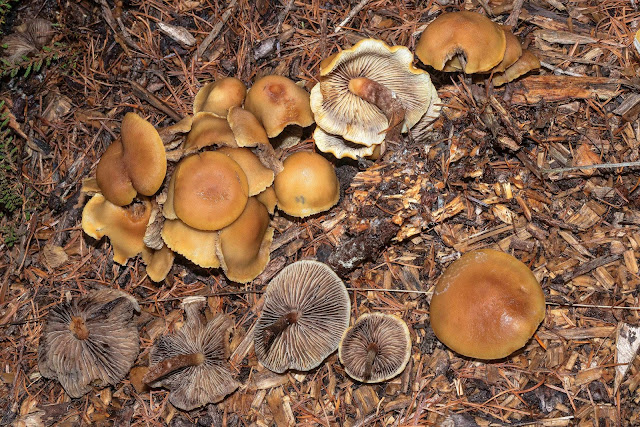 I couldn't identify this species at the time, but after microscopic examination of specimens I was convinced that it was something in the Strophariacea, a large family of brown-spored species that includes a number of well known genera such as Stropharia, Psilocybe, Hypholoma, Pholiota and Kuehneromyces. Given the number of species new to Britain that have been found growing on wood mulch in the last few decades, I was excited. Eventually I contacted Martyn Ainsworth at Kew who suggested that the only way to resolve this was to look at the DNA profile of the specimens, so I sent him some photos plus dry specimens from two of the populations and a spore print. I was delighted to hear from Martyn about 2 weeks ago when he informed me that the DNA profiles indicated that the specimens were actually Snakeskin Brownie - the material has now been accessioned into the Kew collection and DNA database for future reference.
I didn't even consider Snakeskin Brownie at the time, mainly because I was so used to seeing it in its characteristic form, as shown in the upper photograph. Looking at both photographs now, I can see a resemblance that can be accommodated in terms of the enormous morphological plasticity that fungal fruiting bodies often exhibit. However, if you flick through a gallery of photographs of species in the Strophariaceae you will understand the dilemma. This also illustrates how unsafe it can be to identify some fungi from photographs, something that Martyn constantly reminds people about.
My thanks to Martyn Ainsworth and his team at Kew for resolving this.
Posted by Charles Hipkin at 14:56 2 comments: