An all black bumblebee in our garden in Murton this morning, which I presumed to be a female Anthophora plumipes. It was  collecting pollen from Welsh Poppy flowers. I believe that this is a scarce bumblebee in Gower.
Posted by Derek & Chris Thomas at 10:36 3 comments:

A lot of effort has been put into plant recording in recent years, with Charles and Hilary Hipkin in particular making great strides to map the flora of Neath Port Talbot at the 1km square level. Until his retirement from BSBI Quentin Kay similarly mapped much of the Swansea district with many valuable contributions from the late Tony Lewis. Continued recording along with these major contributions is now starting to produce quite good coverage of vascular plants at the tetrad level and even the bryophyte coverage map is developing nicely, aided greatly by Sam Bosanquet's occasional forages into the county. Many thanks too to those who provide occasional records of more interesting species. More updates to follow... 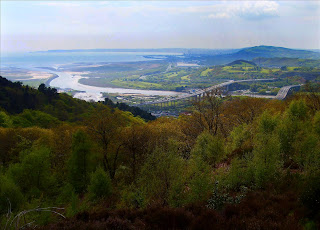 A couple of shots of Neath and Swansea as seen
from the top of Cwm daran, Baglan yesterday. 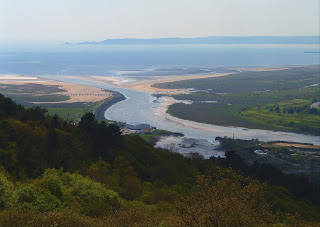 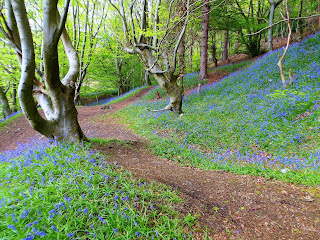 Bluebells in the Beech wood.
Posted by Paul Parsons at 16:31 1 comment:

Belated posting (my fault) of this stunning Curled Octopus (Eledone cirrhosa) found and photographed by Sian Musgrave in pool below Great Tor on 15th Februrary. A truly amazing animal! 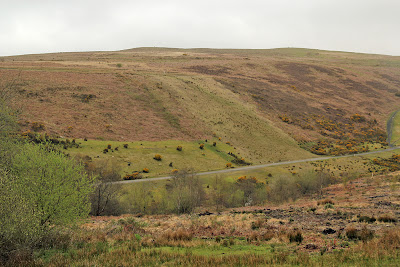 The green scar across and down the sides of Cefn Drum, above Pontarddulais, shows the route of the gas pipeline. I understand that the land was sown with seed collected from adjacent heathland (stands of Heather appearing dark purple on the photo), however, it's hard to imagine at this stage how heath could possibly regenerate given the intensive grazing on the grass-dominated areas of the common.
Posted by Barry Stewart at 09:59 2 comments:

Gordon Howe reported that a nest site used by Peregrines in recent years has been taken over by a pair of Ravens this year, a possible explanation being the gradual disintegration of the nest over the period the Peregrines have been in occupation. Now the Ravens have done a good DIY job, it will be interesting to see what happens next year? 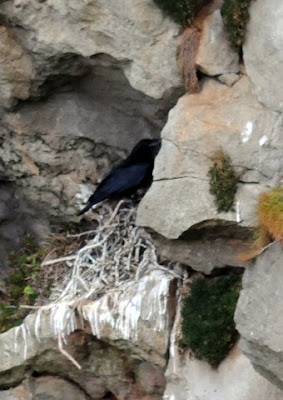 Another observation made by Gordon was a Fulmar 'fouling' an over-inquisitive Herring Gull; we've all heard about this behaviour, but how many of us have actually seen it happen. Unfortunately Gordon missed the actual moment with his camera, but the scene is set below. Gordon adds...'The Fulmar likes being in there but has never nested. The gull also was in there and the Fulmar may have retaken it. This is where the first Peregrines nested (female sat on eggs but the male had abandoned her. Eggs possibly infertile and she gave up after about 4 weeks of sitting) in about 1984 when they returned after the long DDT absence.' 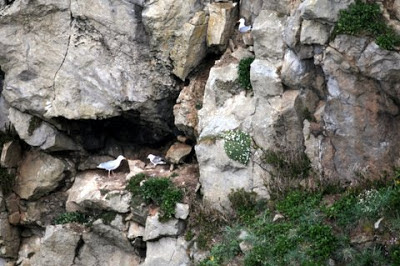 It seems a good opportunity to point out that the Gower Ornithological Society has a new atlas in prep and the example tetrad maps below show the breeding and winter distributions of Fulmar in West Glamorgan. I don't have my copy of the 1992 atlas to hand, but I suspect the distribution has changed little for this species in comparison with others. More updates to follow on this project...

This rather smart presumed Mediterranean Gull x Black-headed Gull hybrid has recently been frequenting the Black-headed Gull colony on the main Lagoon at Penclacwydd, currently estimated at around 120 pairs. The bird was identified by Richard Davies, Wendell Thomas, Lyndon Evans & Julie Evans on 4th May, although earlier reports of a second summer bird suggest that it's probably been around a bit longer than that. Today it was posturing-displaying on its own, without attracting much attention, so second generation hybrids seem unlikely at this stage.
The main features pointing to it being a hybrid are the Med-like satin black hood, bold white eye-crescents and bright red drooped bill. Pro-black-head features are the apparent Black-headed Gull type closed wing pattern, the narrowness of the bill and the white nape. A key feature not visible in this image is the wing pattern which unfortunately we never saw today; hopefully someone will get this on camera. Photos of other Med.x B-h. Gull hybrids I've seen look far more Med-like than this bird, so not sure how unusual this phenotype is?
Posted by Barry Stewart at 19:13 2 comments:

Searching the limestone cliffs of Foxhole Slade with a headlamp about an hour before dawn on Sunday turned up a couple of caterpillars despite a temperature of about 4 degrees C. 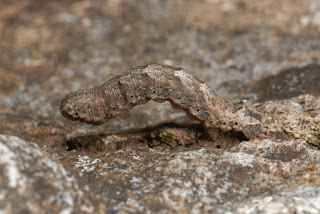 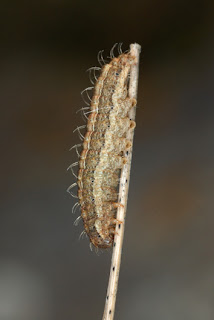 and the widespread and strangely named Uncertain (Hoplodrina alsines). Neither was feeding while I watched them, but they may well have done so earlier in the night before the temperature dropped.