Miscellaneous observations from the wonderfully diverse habitats at Crymlyn Burrows during a morning visit by Matt Pickard and myself included drifts of Goldenrod (Solidago virgaurea), this species being very abundant on the landward dune ridges where it grows alongside Devil's-bit Scabious (Succisa pratensis). The two species proved to be very attractive to a wide range of invertebrates. Unfortunately we failed to relocate Field Wormwood (Artemisia campestris) seen a few weeks previously by Charles Hipkin and Penny Neyland, this now one of Glamorgan's most threatened plants, with invading scrub due to lack of management being the principal cause of its steady decline. 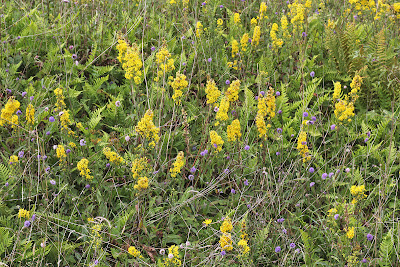 On the plus side the discovery of Star-wort (Cucullia asteris) larvae feeding on Goldenrod was a highlight. I am aware of only four other post-2000 records of this Nationally Notable moth in Glamorgan, all just singletons of adults, so the discovery of a breeding population is very significant. 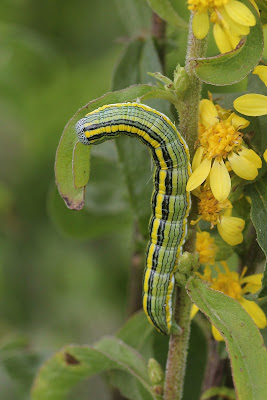 Bumblebees were generally rather scarce, but three noteworthy species were recorded, Brown-banded Carder Bumblebee (Bombus humilis) [a BAP priority species], Red-shanked Carder Bumblebee (B. ruderarius) and Heath Bumblebee (B. jonellus).
Alien plants are a prominent feature in parts of Crymlyn Burrows, for example Early Goldenrod (Solidago gigantea) which form extensive stands along with other species such as Soapwort (Saponaria officinalis), but perhaps most worryingly of all Sea Buckthorn (Hippophae rhamnoides), which is now very prominent in some areas. Patches of of Japanese Knotweed (Fallopia japonica) and Japanese Rose (Rosa rugosa) are not infrequent on the more open dunes and there is patch of the rather incongruous is Orange-peel Clematis (Clematis tangutica), which proved to be very attractive to Brown-banded Carder Bumblebees. This striking plant was first noted by Charles & Hilary Hipkin in 1998 and I assume the ~5m x 4m clump at SS717927 shown to me by Matt today is the same?
Additional to the issues of scrub encroachment and alien invaders, the site will also see changes brought about by the university and proposed tidal lagoon developments. Dune habitats are dynamic and they can show a surprising level of resilience, however, maintaining the biological interest of the site will be a major challenge faced by those involved in the site's future management.
Posted by Barry Stewart at 23:30 2 comments: 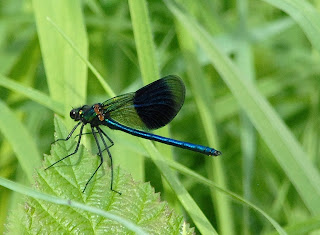 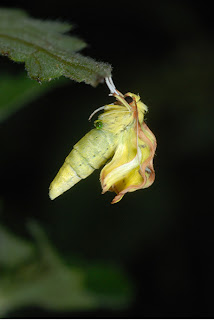 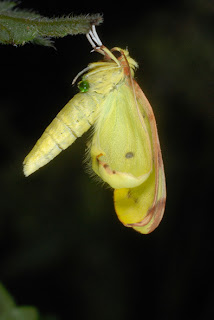 I came across this Brimstone Moth (Opisthograptis luteolata) on the path from Pilton Green to Foxhole Slade at about 10:30pm. In addition to the obvious expansion of the wings it's interesting to note how much the abdomen has expanded.

I returned just before dawn the following morning and found it still in the same place clearly having made no attempt to fly during it's first night as an adult. 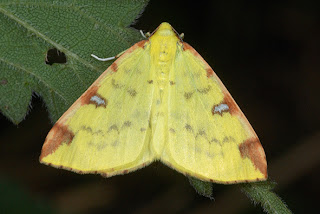 As with Dunnock (Prunella modularis) and Selfheal (Prunella vulgaris), Longleaf (Falcaria vulgaris) shares its generic name with another totally unrelated organism, the moth Scalloped Hook-tip (Falcaria lacertinaria). The Flora of Glamorgan states this neophyte was last recorded in West Glamorgan in 1909 at Port Talbot. Being a rhizomatous perennial, it appeared that the 13m x 3m patch I stumbled across today has been there a long time, but whether the population is the same as the 1909 site is not known. Given the apparent prolific seed production, perhaps it's more likely the species has persisted as small colonies on and off in the area.

Longleaf leaves (left) and Oak-leaved Goosefoot (right)
Other noteworthy plant sightings recently have included Bugseed (Corispermum intermedium) at Margam Tip and Oak-leaved Goosefoot (Chenopodium glaucum) in Swansea Docks. Although both are non-natives and hence of limited ecological significance, they have very restricted distributions in Wales and are of local interest. 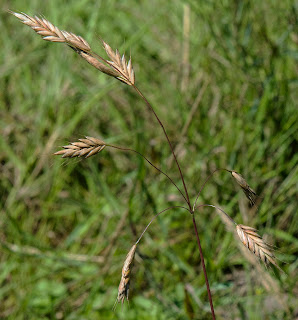 Barry Stewart tipped me off about a population of Rye Brome (Bromus secalinus) in an arable field of wheat near Margam. It's a grass and it may not raise eyebrows, but it is very distinctive and Barry's discovery provides a notable, new record for NPT.
Rye Brome is an archaeophyte (an alien introduced into the British Flora before AD 1600) and was  probably brought to Britain in ancient times mixed with cereal crop seeds, particularly wheat and rye. Until the introduction of efficient seed cleaning methods, the seeds of Rye Brome were common contaminants of cereal crops. Rye Brome is good at doing this. It  has evolved to mimic the cereal crops with which it grows, so that the spikelets that contain the seeds (or grain) disarticulate (break up) and release the seed at exactly the right time to ensure collection with the cereal harvest. The seeds of Rye Brome are also very similar in size to cereal grain, so they are not very conspicuous contaminants. Not surprisingly, Rye Brome became a very successful arable weed and,occasionally, Rye harvests contained so much contaminating seed that the flour was spoiled by a characteristic bitter taste. Before people knew better, this was thought to have resulted from a degeneration of the Rye crop itself. According to Cope & Gray (in Grasses of the British Isles), this is where the name Cheat Grass originated. With the advent of efficient seed 'cleaning', Rye Brome became less common as an arable weed and decreased greatly in abundance. It seems to be making something of a comeback for some reason.
Posted by Charles Hipkin at 22:12 No comments:

As part of the bee survey I walked the length of shore on the Merthyr Mawr side of the Ogmore estuary. Sea-heath (Frankenia laevis) is locally abundant along this shore line and was being visited by 100's of bees, mostly Buff-tailed (Bombus terrestris) and Red-tailed (B. lapidarius), along with 'clouds' of Meadow Browns (Maniola jurtina) in a few sheltered spots. A confiding Clouded Yellow (Colias croceus) was a bonus as was a queen Moss Carder Bee (B. muscorum). 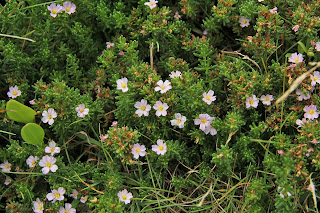 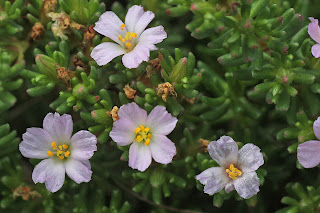 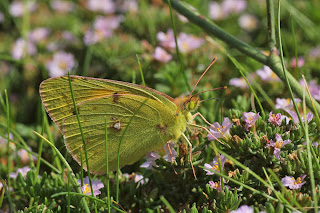 Garnwen today on the E/W glam border near Maesteg. 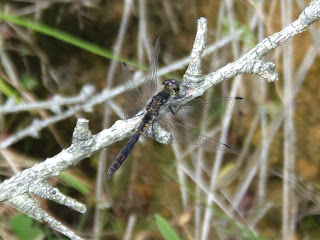 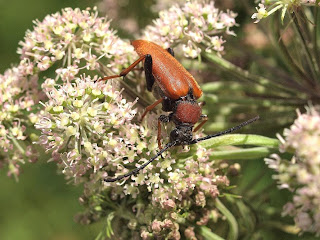 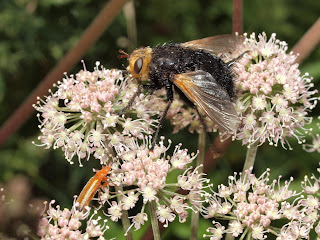 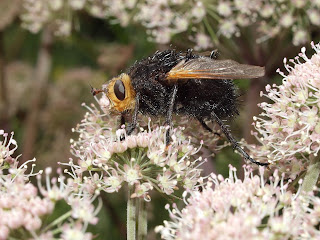 Southward bound terns have been gathering off the old Pembrey Harbour wall in recent weeks and on the 6th Rob Hunt spotted and photographed this rather dapper adult Roseate Tern (possibly the same returning bird seen in recent years).
Counts last night by Rob, Wendell, Lyndon and Clive produced totals of 1 Roseate Tern, 197 Sandwich Tern, 4 Common Tern, 47 Mediterranean Gull, 7 Dunlin, 1 Knot, 25 Ringed Plover & 2 Turnstone, so if you like terns the harbour wall (SS436999) will be well worth a visit; get than an hour before high tide. Numbers should continue increase over the coming weeks and other species such as Arctic, Little and Black should also appear.
Posted by Barry Stewart at 11:17 No comments:

Shrill Carder Bees on the wing

August is the best month to spot this very scarce bumblebee. With help from Kenfig NNR warden Dave Carrington, a few Shrill Carder Bees (Bombus sylvarum) were tracked down on the reserve and I managed to take a few shots of this inconspicuous, but distinctive species. I am carrying out a survey for this species in the Bridgend and Neath Port Talbot areas over the remainder of the month and would welcome any sightings from anywhere in the county. 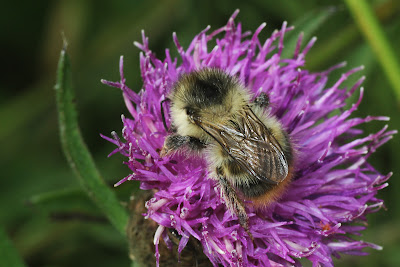 Key features include the rather washed out appearance of the pale hairs on the thorax and abdomen, which are indistinctly banded black between the wing bases and on the abdomen, which is tipped dull orange.
Posted by Barry Stewart at 23:32 No comments:

Found and photographed by Keith Williams on the 1st Aug, but it sounds like it may have been around a few days. It is a rather small-billed bird with a bad right leg and seems very approachable.
Posted by Barry Stewart at 11:32 No comments: 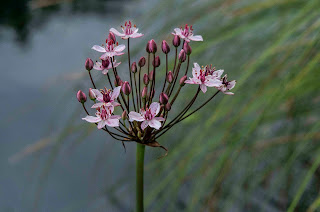 Flowering Rush (Butomus umbellatus) is a charismatic member of the aquatic flora in Neath Port Talbot where it occurs on the Tennant Canal near Jersey Marine, locally along the ditches on Margam Moors and sporadically in a few other places. It is often frustratingly difficult to find and I presume that more often than not it 'hides' in vegetative form. But then, in some years, lots of plants seem to flower in synchrony among the reeds and sedges that clothe the banks. Populations in any location also appear to be very mobile, so that plants (which may be short-lived) often appear in different places in different years. Vegetative propagation by specialised, aquatic buds, called turions, which may be carried passively in the water, may explain this. The last two years have been disappointing for the Jersey Marine population, but this year seems to be a good one. Although Flowering Rush is not a nationally rare species, native populations have diminished in recent decades and it is fairly scarce in our area. Please do not collect or endanger these plants in any way.
Posted by Charles Hipkin at 22:00 No comments: