Look out for Cyperus

A few years back, I noted `garden escape` pale galingale Cyperus eragrostis at Brynmill Park (and somewhere else too), in the western suburbs of Swansea. The same species also occurs as an occasional escapee in the Llanelli area.
Over a decade ago (in September 2004), a meeting of the Llanelli Naturalists was held at a brownfield site, located just to the south of the erstwhile entrance channel to the infilled New Dock, Llanelli, an area renamed stupidly and pretentiously `Delta Lakes` by the local planning authority (where is the delta?!). This brownfield area once held various tinplate and associated works in Llanelli`s early 20th Century heyday, but was cleared in the 1980s.
The area had been used by travellers and dumping of garden waste had occurred, with plenty of the more frequent `garden chuck-outs` but also with various native species or less common horticultural stock being discarded. Various weedy adventives were also present and I remember the genus Conyza causing identification issues, as we were not familiar with the more recent colonists.
We were interested too, to find Cyperus - a few plants of Cyperus eragrostis but also another, smaller one with darker inflorescences. It confused us completely and, to cut the story short, it was sent to Kew, where David Simpson identified it as dense flat sedge Cyperus congestus.
Both Richard Pryce and I took some home to cultivate and my plants still survive, though it behaves entirely differently to eragrostis. The latter, with its pale heads is quite handsome and large - a foot or so - and it is perennial whereas the hardly garden-worthy eragrostis is half the size, is an annual and does not germinate until about June. It is seemingly a plant of warmer climes and it dies completely in winter, after setting seed. Both survived (as a plant or as seeds) the few cold winters we experienced about five years ago.
Cyperus eragrostis spreads itself around, albeit in small amounts around my garden and has reached (no doubt via my muddy boots) the lane in front of my house. In contrast congestus, has firmly remained in its planting area - though it can come to dominate that patch (indeed, it receives periodic `culls`). I include some photos below: 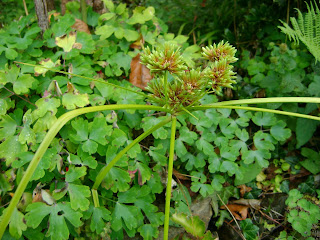 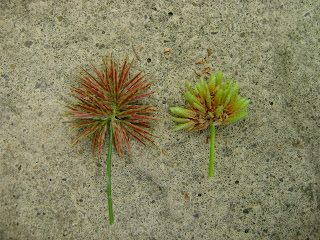 Above: comparison of the inflorescences, with congestus on the left and eragrostis on the right.
Posted by Ian Morgan at 16:29