Is the Ash destined to follow the Elm and the Larch? 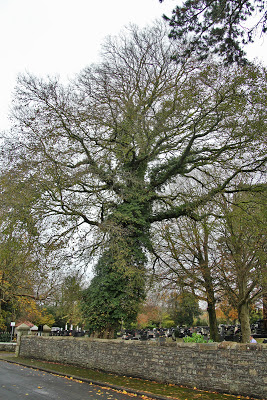 This magnificent Dutch Elm (Ulmus  x hollandica), with a 4.05m girth, standing at the entrance to Rhydgoch Cemetery in Pontarddulais, clearly has suffered little ill effect from the ravages of Dutch Elm Disease. One of the reasons why English Elm (U. procrea) is said to have been so badly affected during the outbreak in the 1970’s was the lack of genetic diversity - the species does not to reproduce well sexually, being largely cloned from limited stock brought in during Roman times. By way of contrast, the Ash is far more sexually active. A higher level of genetic diversity should in theory improve the chances of more trees being resistant to the pathogenic effects of the fungus Chalara fraxinea, but predicting the level of impact it will have on our Ash woods and specimen trees seems likely to remain a subject of much debate. The best article I have seen so far on this topic can be found from the following link: Ash Dieback BSBI

With the dramatic reduction of Larch and now possibly Ash from our landscape, interesting times lie ahead. What will the status of the Gower Ash Woods Special Areas of Conservations be in 10 or 20 years time? I remain optimistic there will still be a lot of interest there - deadwood invertebrates could be worth studying before the situation changes!
Posted by Barry Stewart at 21:46

Interesting times ahead, for sure. I hope you don't mind, but I nicked the BSBI link and circulated it amongst a few people I thought might be interested and also included a link to your site.