A date with some cabbages in Llanelli

Urban botanising can be fun, with a changing assemblage of interesting weeds to spot, if the Council herbiciders have missed them! A species that has increased in recent years is the cabbage palm Cordyline australis, a native of New Zealand, perhaps reflecting its now-widespread availability as a garden plant. Some forty years ago (!), I noticed one growing on the eastern side of Sandy Bridge, Llanelli, in a peculiar position (immediately next to a supporting wall on wasteground) that suggested it was n`t planted, but I assumed that it was just the subject of an inappropriately-placed planting.
In the early 2000s, I began to notice many small seedlings growing in back lanes, at the base of walls or in cracks in pavements and realised that these were bird-sown seeds that were successfully growing; I have seen the fruit eaten by starlings, blackbirds and probably other species, including once an over-wintering blackcap in November 2001. The popularity of this semi-exotic `palm`, which grows and matures quite quickly, probably accounts for the upsurge of recent records. Incidentally, this year is a `fruiting year`, with many plants flowering and bearing fruit.
I now realise that my original finding of that cabbage palm at Sandy Bridge, back in 1973, was also a bird-sown seedling, emanating from a long-established decorative planting at West End, Llanelli, not far to the east or perhaps from one in a nearby suburban garden. The West End plantings were cut to the ground by the cold weather of winter 1981, but re-grew.
I have also seen many seedlings of cabbage palm in the west Swansea area. 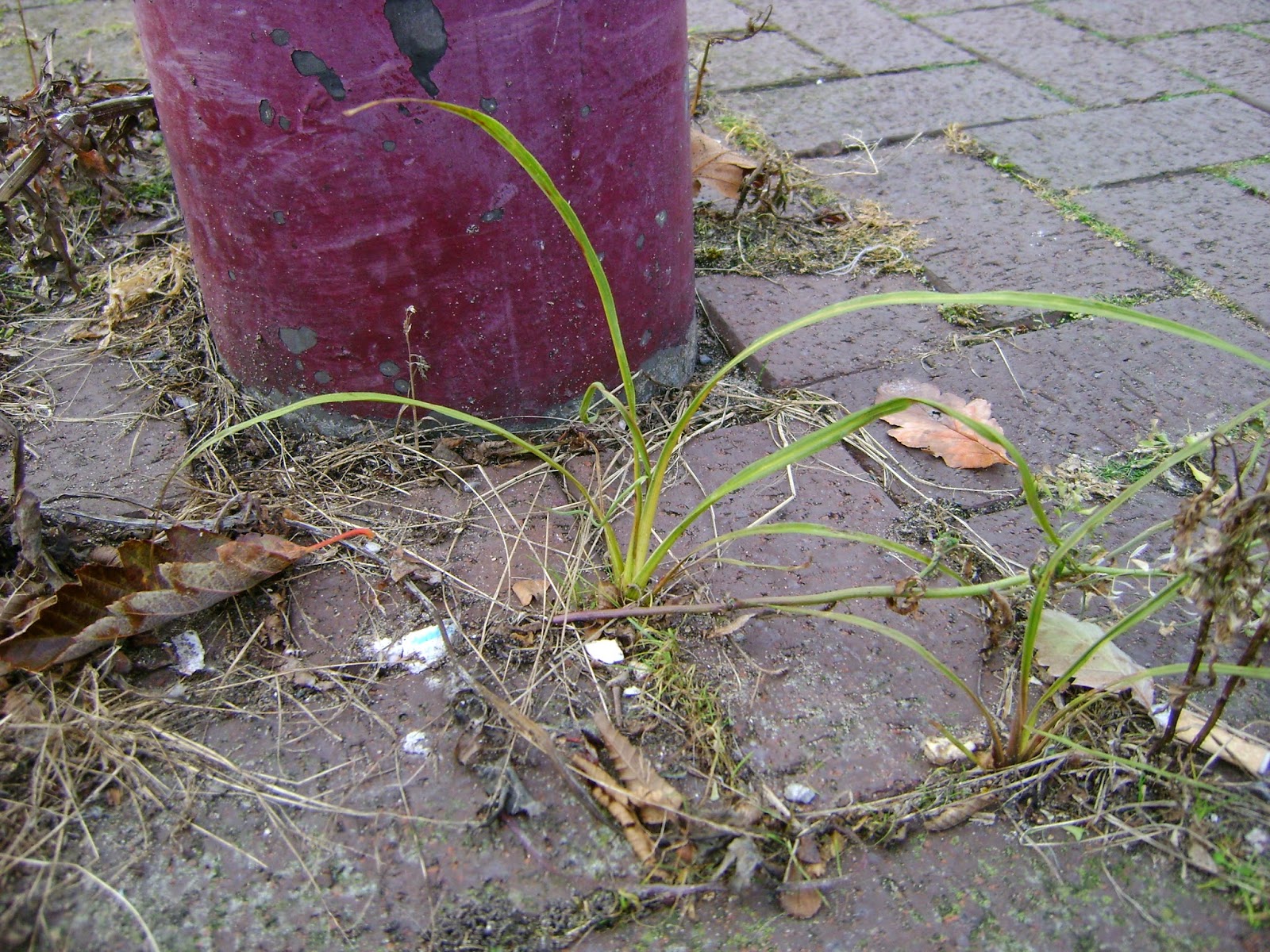 Above: very young Cordyline seedlings in paving near the Asda store, Llanelli. It is this size that can also be often found at the base of walls in backlanes or at the junction of pavements and the fronts of terraced houses. After a while, they are usually weeded out or treated with herbicide. I have teased out plants and grown on to give away as cheap presents! 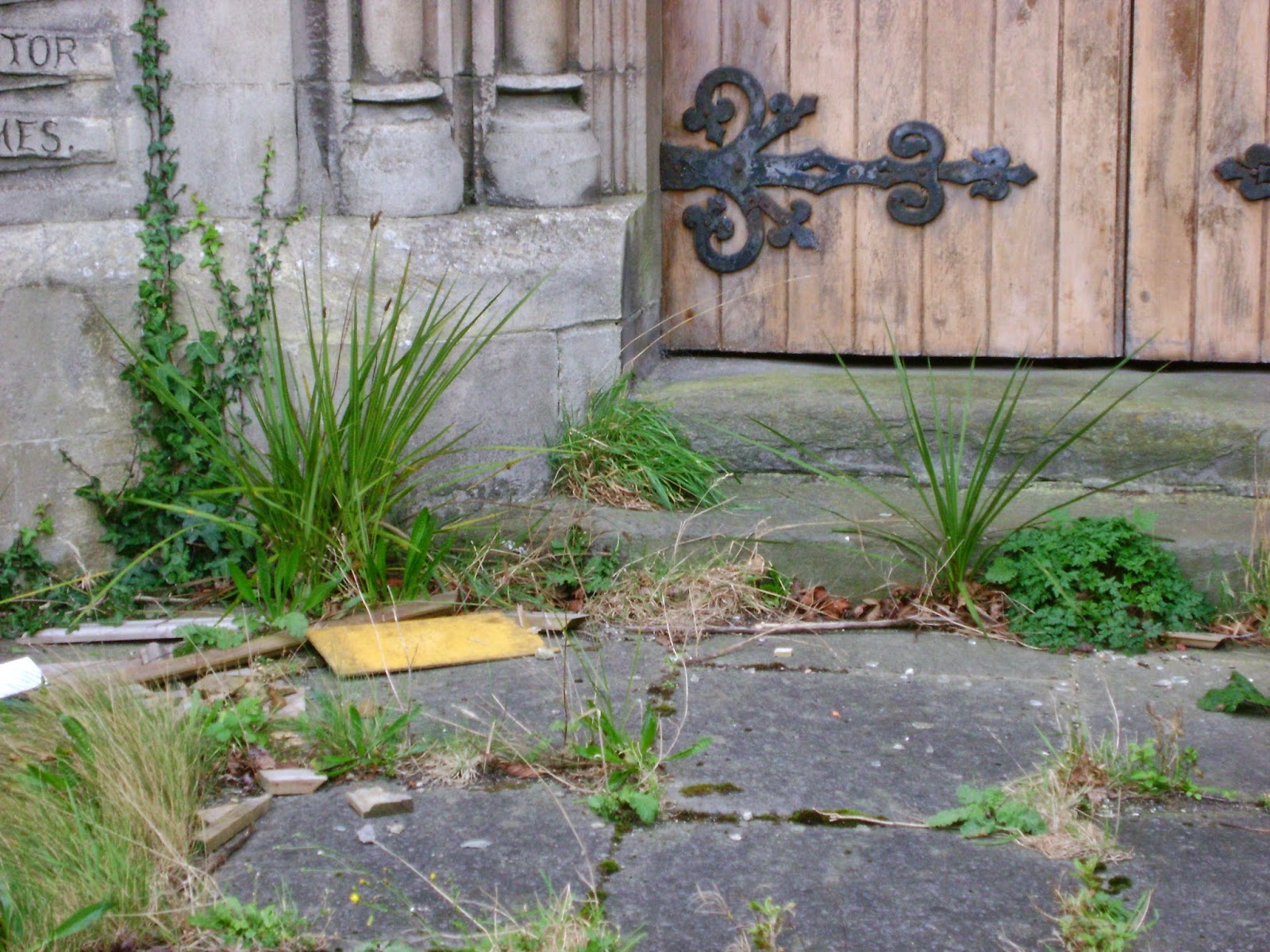 Above: seedlings of Cordyline australis in front of an abandoned church, Murray St, Llanelli, Oct 2011. 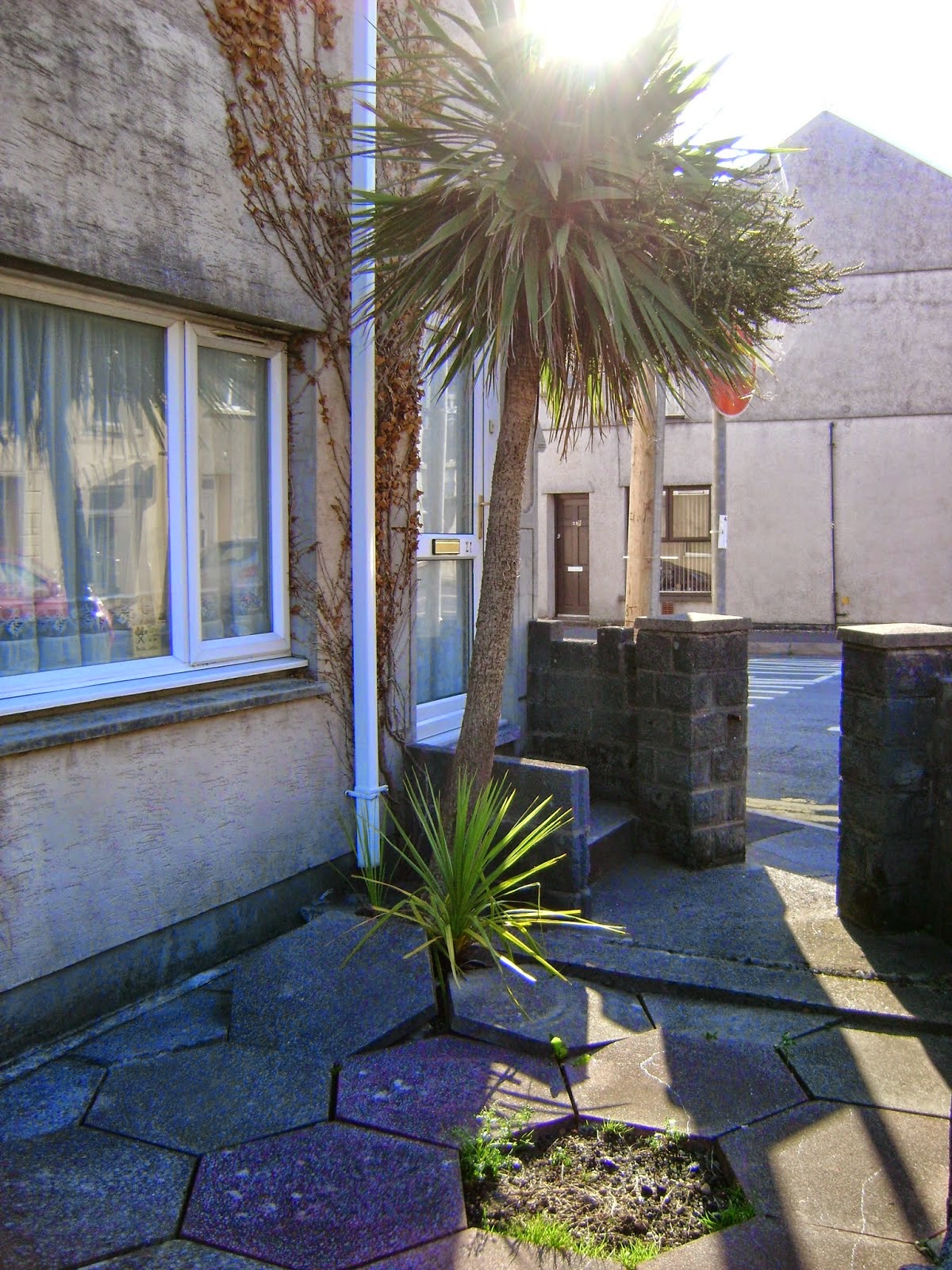 Last week, I had my annual check-up with my dentist, and on the way out noticed a palm growing out of paving in the forecourt of  the next-door hairdressers in Murray St, Llanelli. I had noticed this plant the previous year, but then it only had juvenile leaves and I had assumed (without looking properly) that it was `just another cabbage palm`.  One year on, to last week, it had grown and it was clearly one of the true palms, almost certainly originating from a discarded seed from a commercial date, with Phoenix dactylifera cited as the overwhelmingly cultivated commercial date crop in warmer climes. Last winter`s mild conditions, coupled with the urban `heat bubble`, (plus the fact that it was outside a womens` hairdressers...and all that heat!) must have enabled it to survive a Welsh winter.
Phoenix canariensis is another palm that is cultivated as a garden plant and I have seen it surviving winters at (eg) Mumbles in Swansea and Burry Port in Carmarthenshire, but I`ve never seen one mature to yield fruit; another cultivated palm, Trachycarpus fortunei looks completely different. 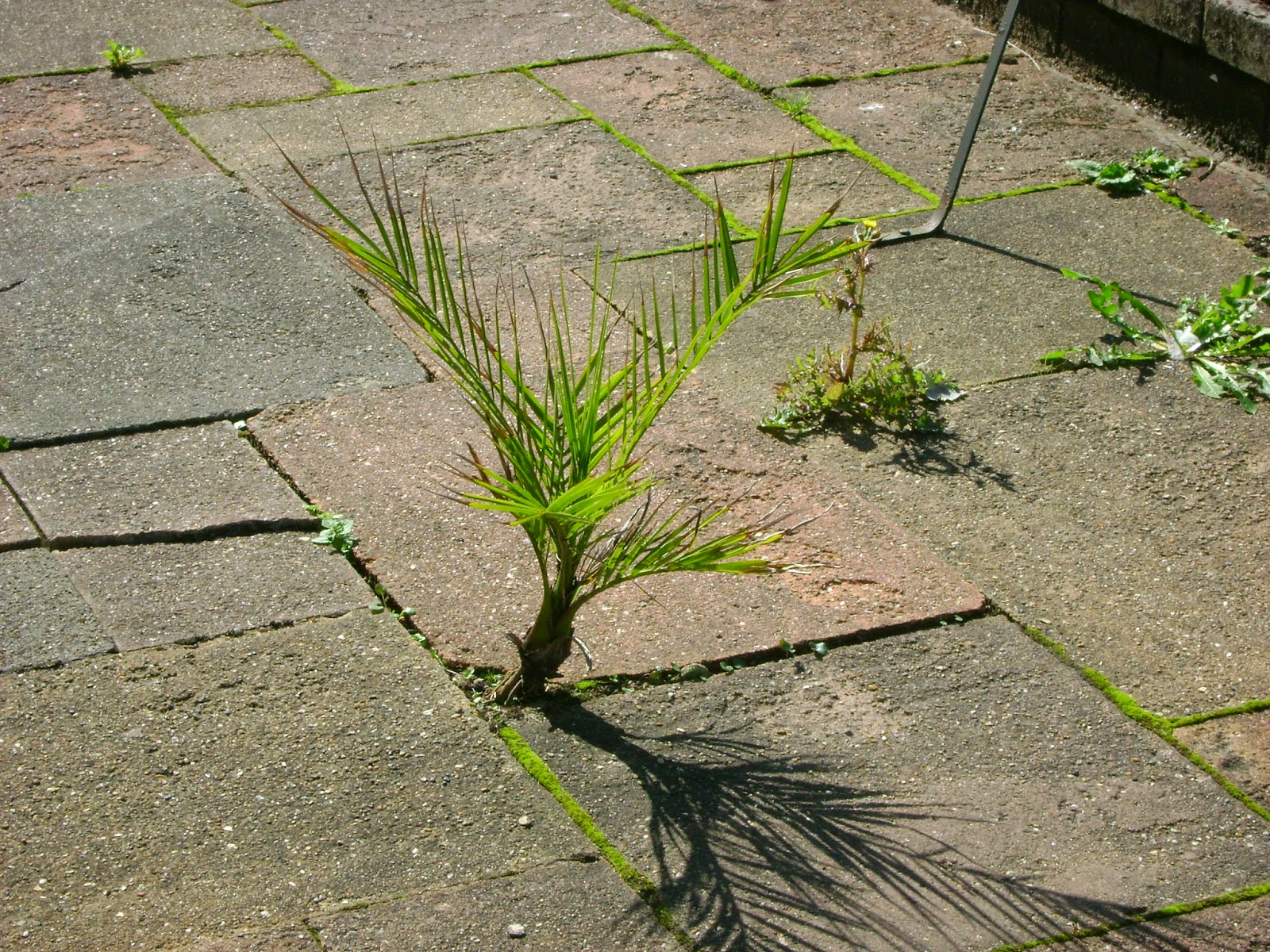 There must be something about going to the dentist that sharpens a botanists senses, as Richard Pryce found a burgeoning population of Water Bent in the back lane of Park Road in Gorseinon prior to a dental visit.

Interesting post Ian - I've seen the Cordyline seedlings in similar situations in Cardiff but hadn't twigged that they were bird dispersed.

Have you tested them to see if they taste anything like cabbage?

I`ve never actually thought about the English name! Looking `cabbage palm` up on Google, several other palms have edible young shoots (presumably tasting a bit like cabbage) but no mention of Cordyline australis.
I`ll leave the gastronomic side of things to you George...!

The growing point (heart) of the mature plant is cut out, any tough leaf bases are removed and the soft interior is cooked. I learned about this in New Zealand when staying in Timaru - literally "Place of the cabbage palms" in Maori.