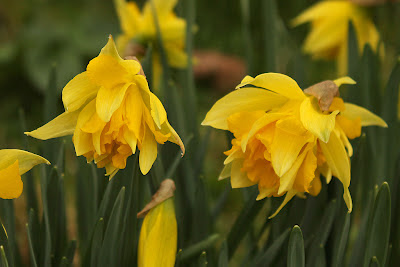 It has been described as the ugliest daffodil in the world, but the Derwydd Daffodil (Narcissus obvallaris ‘Thomas’ Virescent Daffodil’) is special to South Wales after being rediscovered here only twenty years ago or so. This flore pleno variety is characterised by its green-tinged, double flowers, which often appear twisted and messy. 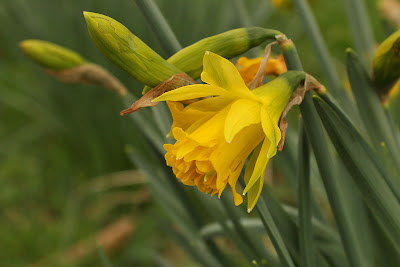 Derwydd is the Welsh name for ‘oaks’, but the variety is actually named after a garden in Llandybie in Carmarthenshire where it was first found. Although well known in the Upper Loughor at Llandeilo Talybont Church (known locally as The Old Church on the Marsh), its history in Glamorgan appears vague and I would be interested to hear if anyone has references that might shed some light on this subject. It’s possible the daffodils have been there a long time as Ivor Griffiths wrote (Ref.) ‘The earliest written record of Llandeilo Talybont was during a dispute about boundaries between the Bishopric of Glamorgan and that of St. David's. Urban, Bishop of Glamorgan (1107 - 1134) claimed several parishes far across the Loughor river as being part of his diocese, stating that they had been given to Dyfrig and Teilo by Meuric ap Tewdrig.’
Posted by Barry Stewart at 20:12

I did not know that these daffodils were local to Wales. I think that I have some in my garden in North Gower. We also had the same ones on a farm where we used to live near Pengwern common.

I have also seen these daffs on N Gower, in what I believe is ASNW near Leasom. Who described them as the ugliest daffodil in the world - I think they're gorgeous!

These grew in our garden in the Lleyn peninsula in the 1960s and I was told by our neighbour they were the "real Welsh daffodils". I wanted to dig one clump out of a clawdd (earth filled stone wall) and went down about three or four feet before giving up! That would indicate they had been there a very long time indeed. I cannot vouch for the age of the clawdd, but the properties it divided were certainly over 200 years old.

We moved to our smallholding near Drefach Felindre in 1985 and found this daffodil in our garden. Loved it so much we have allowed it to spread over a much larger area. Never thought of it as a rare plant. J.E.

I was shocked and surprised when I read this about the “ugliest daffodil” in the world. I was researching this because some have been in my family’s ancestral cemetery in the State of Tennessee U.S.A., since about 1870. As the story goes, my ancestor planted the cemetery full of these after the Civil War in this cemetery. A hundred years later the cemetery was abandoned and overgrown. Then about 6 or 7 years ago, my distant cousin, assisted by family members, cleaned up the cemetery. These daffodils were thriving among the weeds and brambles. He sent me 3 bulbs as a start. I live in the Little Rock, Arkansas area, and they have not done well. I have only one clump of these surviving, but this year was colder than usual, and it came back with a vengeance. It is beautiful and healthy looking, so I decided to try to find out what it was. The family calls it the “Johnston buttercups” after our family name. It obviously is not a buttercup. We don’t know where our ancestor got the bulbs, but they certainly didn’t go extinct.

I found a naturalised clump of these daffs this morning with my walking buddy - on a bush property at Yerriyong, out of Nowra, New South Wales Australia. The centre is particularly bright green, surrounded by clear yellow petals.