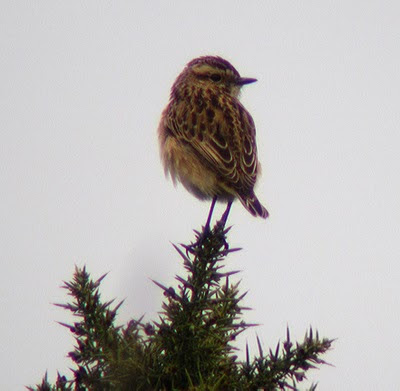 A quite late juvenile Whinchat at Crymlyn Burrows today. Although, this species has been recorded in November a couple of times since 2000 and even in December further back. I used to see them quite regularly at this site during Autumn passage many years ago, but this is the first for me from this site over the last two years. However, it was recorded at this site earlier this Autumn.

Curlew Sandpipers continue to avoid me though and with Dunlin numbers up to 88 today I thought I had a good chance. If only these numbers had been present earlier in the season. Also present on the shore today - 5 Teal, 2 Grey Plover, 1 Knot with good numbers of Sanderling and Ringed Plover. A Peregrine fly-through caused panic on the beach. It never really looked committed to chasing anything, more like it wanted to worry the birds a bit. The Teal just sat tight on the sea waiting for the danger to pass.

2 Water Rail were calling from the reedbed and wet wooded area at the western end of the site.