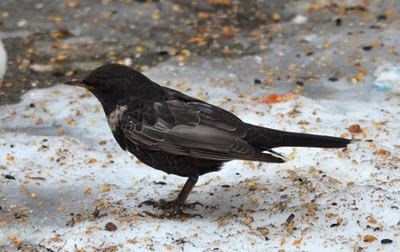 Having failed to get any record shots of this bird as it passed through my garden it was great to enjoy Terry(Tovey) & Kim's hospitality earlier today and take a few photos of this fantastic bird. 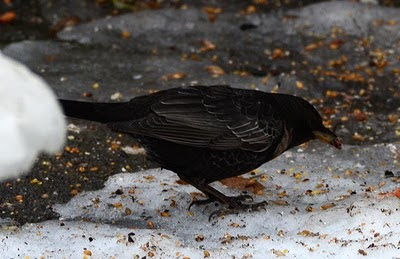 Obviously not liking the look of my garden, where it stopped briefly on the 23rd, it has been present ever since Christmas Eve in Terry & Kim's garden where it is being looked after very well indeed. With the amount of food on offer here it must think it's Christmas! 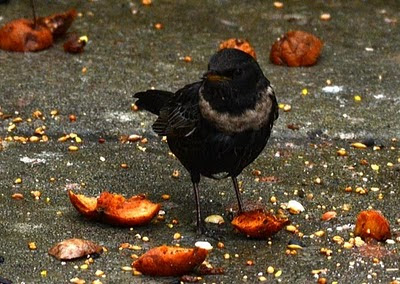 The record flight shot shows an area on its back that has a lot of feathers missing and it also shows feathers missing from the wing in the top photo. This is something that I saw on the bird in my garden just before my mad dash for the camera. Proving that this is the same bird. 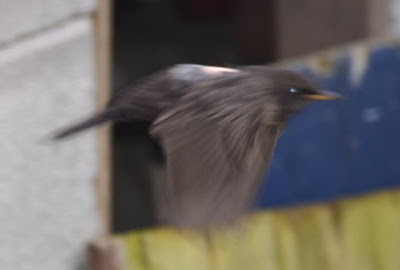 When I saw this bird first of all I thought it may have been a female due to an apparent dark brown appearance and dirty looking bib. The bird looked much blacker today so maybe I was too hasty to rule out a male?

Terry and Kim have endured a rough time in recent years and it is nice, especially at this time of year, for them to be treated to such a great record in their garden.
Posted by Mark Hipkin at 18:20

Great photos Mark and a great garden bird for Terry & Kim. It's certainly a 1st winter bird (as shown by the contrast between the inner and outer greater coverts shown in the second photo) and I'd say this is probably a male based on these images, though sexing is not always possible.

Its thrilling to see bird pictures specially the briton ferry one.