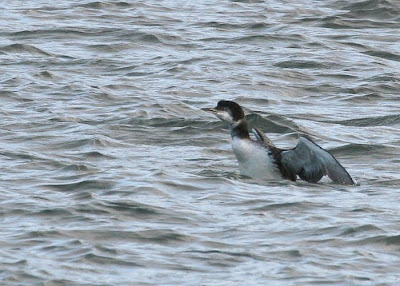 November was a good month for Great Northern Divers with a minimum of 11 being noted around Gower. There was a maximum five in Oxwich Bay between the 20th & 24th, one off Mumbles Head on 25th (Paul Larkin), another off Dalton's Point in the Burry Inlet on the 26th [with 3 more seen on the north shore on the 28th (Bernie Beck)] and one in Prince of Wales Dock on 27th (Andrew Lucas) which was still present the next day (see photo above).
Posted by Barry Stewart at 20:36 No comments:

There are large numbers of Kittiwakes along the coast at present with 463 Kittiwakes counted flying west past Mumbles Lighthouse in a 1 hour seawatch this morning. There were also another 93+ Kittiwakes resting on the water in Swansea Bay. The Surf Scoter was still in Bracelet Bay with its 9 Common companions.
Posted by Barry Stewart at 15:55 3 comments: 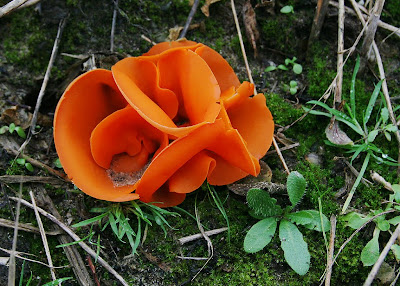 With all of the grey skies at present the spectacularly coloured and aptly named Orange Peel fungus (Aleuria aurantia) added colour to the wet sand and muddy fen at Oxwich today.
Posted by Barry Stewart at 16:44 No comments: 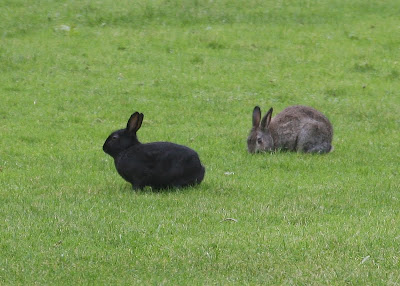 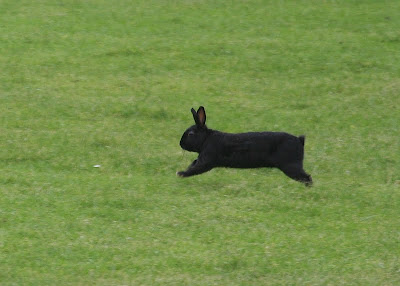 Among the 40 or more Rabbits in the campsite field today was this striking black specimen. I have seen the odd one at this site before, but elsewhere this form does appear to be scarce.
Posted by Barry Stewart at 16:38 3 comments: 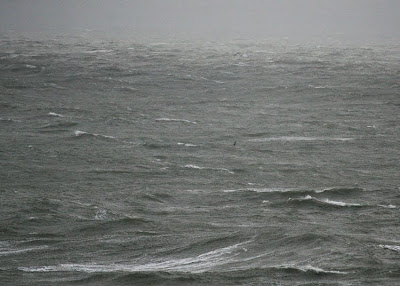 No sign of the hoped for Leach's Storm-petrel, but plenty movement with all bird listed below heading west (spot the Bonxie!):
2 Red-throated Divers
4 Fulmars
1 Gannet
2 Common Scoters (+7 on sea)
1 Ringed Plover
5 Purple Sandpipers
1 Bonxie
3 Common Gulls
176 Kittiwakes
298 Guillemots
3 Razorbills
17 auk sp.
On the rocks at Sedgers Bank were 8+ Shags and a Little Egret, also there was a Grey Seal in the bay.

In Oxwich Bay there were 5 adult G.N.Divers (still eating crabs) and a feeding group of 142 Kittiwakes.
Posted by Barry Stewart at 16:09 No comments:

Chris Brewer reported that the Black Redstart seen on and around the National Trust shop buildings at Rhossili yesterday (per Sian Musgrave) was still present again today.
Posted by Barry Stewart at 18:56 No comments:

For a scoter, the Surfy showed quite well this morning before the rain set in. The attached video clip shows the distinctive jump-dive with half open wings (it's the bird on the right, first in real time, then half speed. Note that Common Scoter keeps its wings closed). The birds were at about 400m in poor light hence the quality! Hopefully it will stick around and someone will get a better capture...

Posted by Barry Stewart at 17:14 No comments: 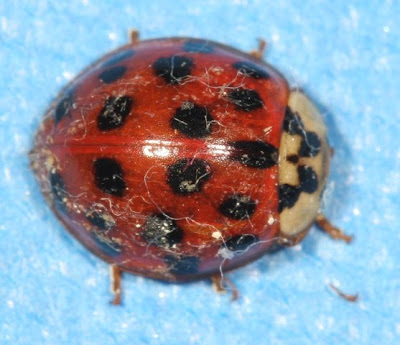 Ian Tew sent me this image of a Harlequin Ladybird that was found in Swansea University by Mrs Maureen Roberts on 17-11-09. For more information on on the spread of this species in the UK see http://www.harlequin-survey.org/#
Posted by Barry Stewart at 18:16 No comments:

Grey Phalarope at Crymlyn Burrows today feeding in the river near the rivermouth and in shallow water of the receding tide on the beach. The beach itself was crawling with Herring Gulls, numbering 550+. The recent winds having driven these birds into the bay. Also today 1 female Merlin hunting in the Dunes.
Posted by Mark Hipkin at 16:16 No comments: 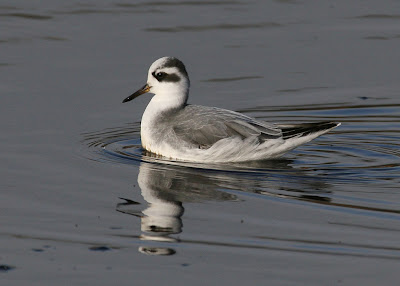 This very vocal and quite mobile bird was feeding on the pools of new fen area. In the bay there was a minimum of 4 Great Northern Divers, one of which was manipulating a crab in its bill for some time.
Posted by Barry Stewart at 13:04 No comments:

Black-tailed Godwit [Lime/Red Lime/Red flag], was today seen feeding off Dalton's Point in a flock of 140 birds. It was ringed as a chick on 02-Jul-09 at Reykholar, ICELAND and has been present in Burry since 01-Sep-09, though this is the first time I have seen it on the south side of the estuary. Ringing recoveries indicate that most Black-tailed Godwits we see here breed in Icelandic. 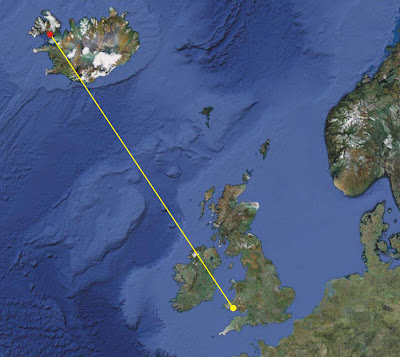 Posted by Barry Stewart at 12:04 No comments: 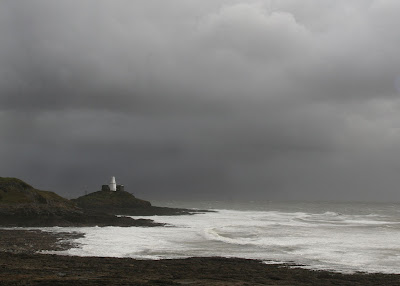 Despite the stormy conditions good numbers of Med Gulls can still be seen feeding in the race off the lighthouse when the tide is falling. 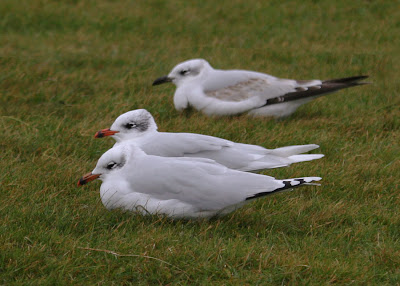 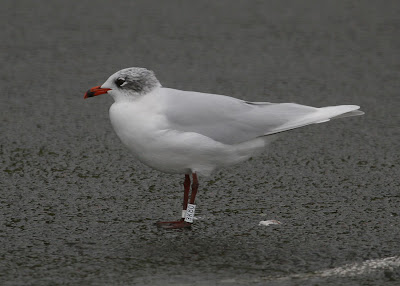 White 3K80 was ringed as a pullus on 02-Jun-06 at Zwijndrecht (Ineos complex), Antwerpen, BELGIUM and has been seen in our area in each subsequent year. A minimum of 42 Mediterranean Gulls have been frequenting Bracelet Bay recently including a few birds whose rings I have not managed to read.
Posted by Barry Stewart at 19:04 1 comment:

Request for help at Blackpill

Dear Ladies and Gentlemen,
As you may know Gower Ornithological Society works with the Glamorgan Bird Group to run the Visitor Centre at Blackpill. This is opened every second Sunday between 10.00 and 1.00, times which are aimed to coincide with high tide, as far as this is possible. The Glamorgan group is well represented each Sunday by some very welcoming members, led by Colin and Daphne Jones who have made it their business to decorate the centre imaginatively and to provide excellent facilities, (usually including a cup of coffee) for bird-watching at this SSSI. GOS has again been invited to be represented at the Centre and to assist with introducing any visitors to bird-watching at Blackpill, and I should be delighted if some of you would offer to turn out to the Centre on any of the dates below. It is a very pleasant way of spending a Sunday morning, chatting to like minded folk, and the bird-watching is always interesting. Last time out 79 Great Crested Grebes were counted from the centre, not to mention a good variety of waders. If you are willing and able to help represent the Society, do please let me know and I will be happy to arrange any introductions needed.
Yours
Jeremy Douglas-Jones

Beneficial effects from the fen restoration and pond clearance work carried out at Oxwich Marsh by CCW in the last couple of years have included the expansion of the macrophyte community. Although the waters are rather nutrient-rich, species that have clearly prospered in deeper water include Bladderwort (Utricularia australis), which has flowered extensively over the North Pond and in several of the ditches. In winter Floating Crystalwort (Riccia fluitans) is particularly prominent in many of the open water areas, including the cleared fen area shown below, where it occasionally forms dense mats. 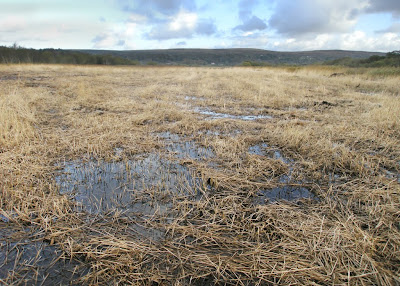 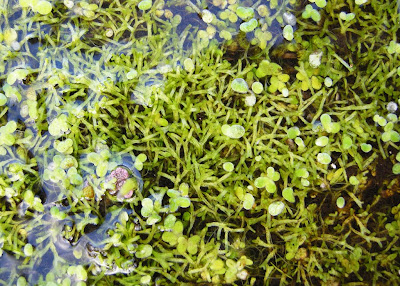 Bladderwort (photographed earlier in the season). 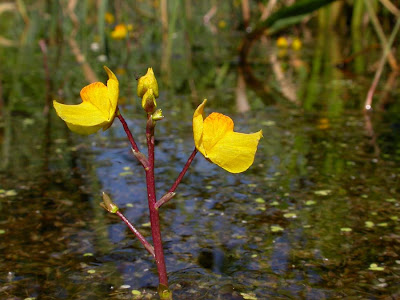 Posted by Barry Stewart at 21:49 No comments:

39 Reed Bunting from a total of 93 birds trapped this morning at the feeding station. One of today's Chaffinch was ringed at Mewslade in October 2007. A quick stomp over the 'restored' fen area revealled 44 Snipe and 6 Jack Snipe. Also 22 Gadwall, 6 Teal, 1 Coot, 8 Moorhen and 2 Little Grebe on North Pond.
Posted by Barry Stewart at 14:52 No comments:

Today at Crymlyn Burrows I watched in fascination as a Common Gulls used a surprising method to feed. I was at the western most part of the beach near to the docks. The beach here is firm underfoot with a strong shingle element mixed in with the sand. It was about 3 hours after high tide with good numbers of birds feeding at the waters edge. Oystercatcher numbered about 200 with a few Curlew also. The remainder was made up of gulls. 60+ Black-headed Gulls, 30+ Common Gulls, 30+ Herring Gulls and also some Greater Black-backed Gulls. I noticed that a few Common Gull were flying up into the air and coming back down and then up again. On closer inspection I could see that they were taking up shells and dropping them onto the beach to break them open. If the shell did not break open then they would swoop down and pick up the shell and drop it again. It was difficult to see exactly what the shell was but they appeared to be the size of a large acorn and pale in colour. It looked like some kind Sea Snail? The Common Gulls were the only gulls to behave in this manner and although immature birds where also present, only adults were seen to perform this trick. Presumably Common Gulls do this in other locations locally also, if so and you know what the shell is I would love to know?
Posted by Mark Hipkin at 19:30 2 comments:

Peter Douglas-Jones wrote:
79 Great Crested Grebes in Swansea Bay this morning. There was a 37.1 ft tide at 9.46 and I was at the GOS/ RSPB shelter.
Posted by Barry Stewart at 16:24 No comments:

Peter Douglas-Jones wrote:
Magpie carrying a stick this morning, Bethany West Cross. It was 13 degrees; and by early afternoon 11 degrees: the coldest day of the year, I think. I am at Bethany Lane several times a week so I will know if this really is nest building. I have known ravens to nest in November but not magpies.
Posted by Barry Stewart at 21:06 No comments:

Water Pipit showed very well on the slipway at Penclawdd car park (SS544958) this morning. This is not an easy species to get good views of as they tend to fly off high when approached, but today the car provided an effective hide allowing very good views for Neil Edwards and myself. When looking for this species, note that it is rarely seen at anytime other than high tide as they tend to remain concealed in the tidal creeks at other times. The winter distribution below (lime = Pre 2000, Green >= 2000, centred black = 2009) shows the species prefers the upper estuary, but note Rock Pipit also uses these same habitats when non-breeding.
Water Pipit 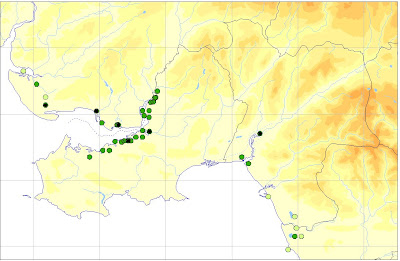 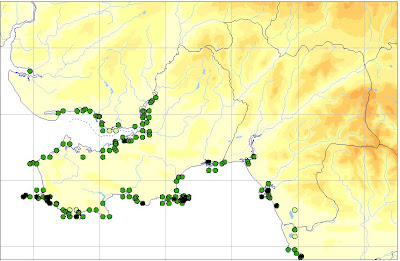 The first-winter Little Gull was highly mobile, moving between the northern and southern shores of the estuary and was last seen flying east towards Loughor Bridge.
Posted by Barry Stewart at 12:47 No comments: