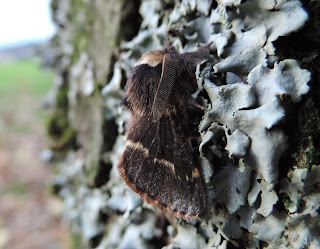 Gareth Watkins wrote 'This ring-necked parakeet turned up in a garden on the cliffs at Pennard around dusk last night and is still around this morning. It is eating windfall apples & giving the occasional loud squawk.'

Other than the long-stayer at Singleton, which has been present since 2009, the only other 21st Century records on the system is one that I saw in a neighbours garden in Gorseinon on 30 May 2000 and another which Dave Carrington saw fly over the cricket pitch on entrance to Margam Park. I wonder if there are others out there that have not been reported?

...from Gareth this am 'PS it also like peanuts!'

Almost all of the Black-tailed Godwits seen in the Burry bearing colour-rings have been Icelandic, including the most recent observation of LY-GYf [code read from L-R as if you were positioned behind the bird - i.e. Lime/Yellow-Green/Yellow flag]. The bird was first seen at Penclacwydd by Colin Wilkie on 16th October and has subsequently been reported by Wendell Thomas, Paul Larkin and myself at Penclawdd (Glamorgan) as well as Penclacwydd (Carmarthenshire).
David Price the scheme organiser provided excellent feedback of this bird, which was ringed as chick on 13th July 2013, along with the photos below. David said 'Thanks for the records and picture of LY GYf - one of our "babies". Nice to see it grown up and enjoying the delights of South Wales. The bird was one of a brood of three, which Ruth and my grandson, Eoin, found in a field behind the petrol station at Fljot, adjacent to a bit of a football pitch.  Not a terribly salubrious sounding location, but it was in a beautiful Icelandic valley.  Photos attached of the breeding area and of the bird with its two siblings.'

A deciduous tree (Ash or Sycamore?) competing for light amongst the conifers (presumably Sitka Spruce). 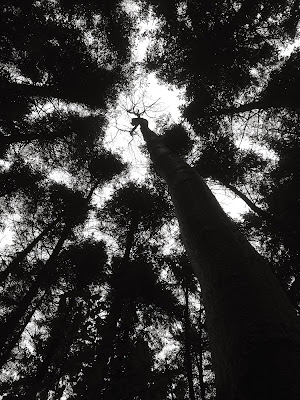 Posted by Barry Stewart at 17:30 No comments:

A peregrine shows who is boss!

Every so often, I ask one or two members of the staff employed at the Stradey Estate (on the western outskirts of Llanelli), about any interesting wildlife that he or his collaegues may have seen. This last week, they witnessed a most peculiar event which was reported to me yesterday. A peregrine was seen to attack and kill an Accipiter hawk. This latter bird, they suggested, was a female sparrowhawk but, looking at the photograph that they kindly supplied, shows the dead hawk to have clearly orange eyes, hinting that it is a male goshawk. I would be grateful if readers can confirm or correct this latter presumption please.
The peregrine, whilst standing over the hawk - which it had killed by a peregrine-style bite to the back of neck (see photo) - was then subsequently attacked by a buzzard. Wisely perhaps, the buzzard then `backed off`. Also note the markedly swollen leg of the dead hawk - any suggestions why please?
I am grateful to Vincent Somers-Yeates for supplying the above information and also the two photographs shown below. The dead hawk is obviously shown first, then a photo of the peregrine.

Not a case of hybrid vigour....

Many of you may have seen (at least before the current spate of gales) seed-like structures hanging on stands of Japanese knotweed Fallopia japonica. What you are seeing is the embryonic hybrid between that species and Russian vine F. baldschuanica, a not uncommon (if excesively rampant) garden climber.


Some at least of these seeds are fertile, and if sown will give you the hybrid Fallopia x conollyana (`the railway-yard knotweed`). I have grown this hybrid from seed collected from both Pwll (Llanelli) and Gelli Aur (near Llandeilo), but these plants (which were grown in 2007-08), were rather floppy in growth form and did not prove to be hardy in one of our more ordinary winters, let alone the more severe ones that we subsequently experienced in recent years.
The hybrid has, however, been found growing wild elsewhere in Britain and Europe, albeit rather rarely. An informative article, written by JP Bailey, is found in Watsonia 23: 539-541 (2001) for those who are interested.


A bit of a howler today with 89 mph winds recorded at Mumbles Head. Chris Manley photographed these Sea-slaters (Ligia oceanica) which were pouring up the cliffs to escape the storm. Chris said "There were thousands and I was getting covered in them as I sat taking photos."

Posted by Barry Stewart at 23:30 No comments:

The uncommon saldid bug Chartoscirta cocksii hopped out of a sample of Sphagnum moss collected from wet heath adjacent to Broad Pool today.

Posted by Barry Stewart at 23:21 No comments: