This is essentially a follow-up to the post about the same time last year. I watch a stretch of cliff coastline between Rhossili and Ramsgrove. I am deliberately vague about exact locations for reasons which are probably obvious, in view of the rarity and protection status of the Chough. In a stretch of coastline about a kilometre in length there are three pairs of Choughs which have bred successfully this year. The next few weeks present an opportunity to watch these wonderful birds moving around in family groups, feeding. Last year (over a slightly greater length of coastline) four pairs bred, producing a total of 10 fledged juveniles. This year one pair was on site in early spring, but disappeared after their nesting area was disturbed by climbers. The other three pairs have all done well. Moving from west to east: 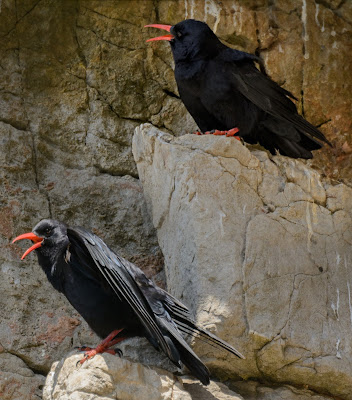 Pair A defending their territory near to where the juveniles are hidden.
Choughs are engaging, characterful birds. They have an extremely distinctive call and are very vocal, both in flight and when either feeding or defending their territory. They perform some pretty amazing aerobatics, which seems to have little purpose other than having fun.  They are often quite easy to approach. I hope I have provided enough information for readers to be able to locate and identify these three families, but kept enough details confidential to protect them.

If you do come to see these birds you will also be treated to three pairs of breeding Wheatears (two pairs feeding young today). The male and female of one pair, with food for the nestlings, photographed this morning: 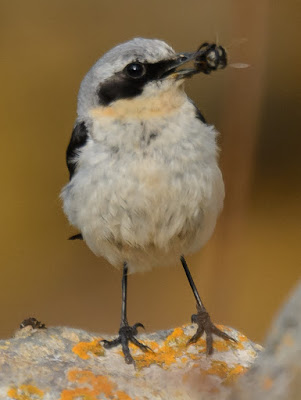 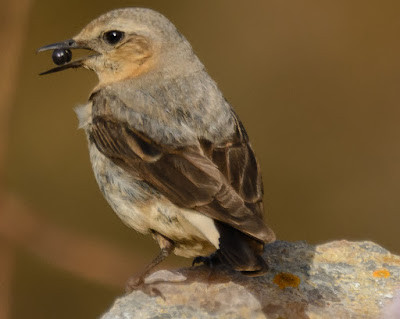 This has also been a good year for Stonechats, with at least four pairs fledging young in the same stretch of coastline where the Choughs breed. There are seven pairs of Fulmars on ledges showing breeding behaviour, but I haven't seen an egg yet, so maybe not this year! But there's plenty to admire in the Fulmars' flying, anyway: 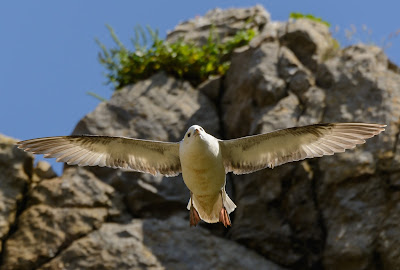 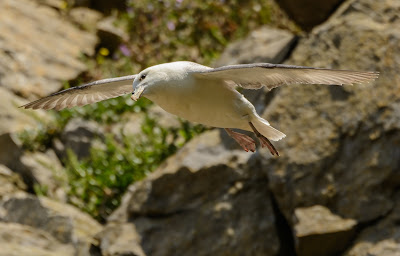 Both taken on June 15 in one of the Chough territories.

From Clyne Valley came this Western Bee Fly Bombylius canescens, common enough I think but I don't remember seeing it before. 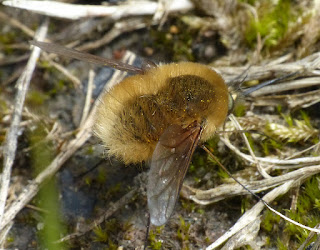 At Oxwich just inside the Penrice Estate I saw what I take to be Neoitamus cyanurus, a robber fly

and Pamponerus germanicus at Whiteford Dunes. 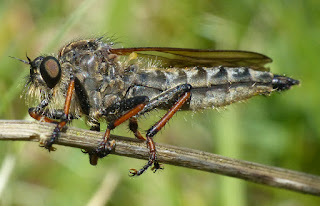 It's been lousy weather so I've hardly run the moth trap but I was pleased to find this Bordered Straw at the northern point, gather there's been a few around. Also saw my first Painted Lady of the year. 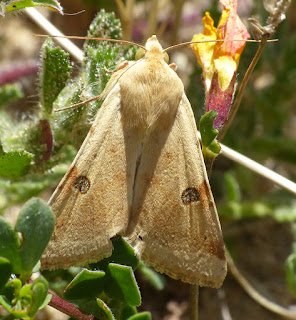 Of course there's loads of Bees and Wasps around but it takes far too long to identify them and sort the photos so that I can post any near the time of finding them.

Saw a skein of 30+ geese flying west this morning. Seen from Gowerton over Three Crosses so a mile away but grey, so not Canada, but what are geese doing here at this time of year?
Posted by Chris Manley at 11:32 No comments:

The Hemipteran froghoppers, leafhoppers and relatives are a group that I only `dabbled` with when I was actively recording invertebrates about twenty-five years or so ago. One unmistakable species that was said to be `common` in one of the popular generalist field guides of the time was Cercopis vulnerata, which I`d only recorded once (though rather frequently on that occasion), on the free-draining friable, rocky soils in the extensive Crychan Forest, right in the extreme NE of Carmarthenshire. That was in about 1993 - I have the exact date in my files.
A repeat visit to Crychan (a recommended area for the naturalist) in June 2014 revealed that this distinctive species was indeed still present, and a posting on the Carmarthenshire Moth blog prompted a comment from Sam Bosanquet that he also had it around his home near Brechfa in mid-Carmarthenshire (also abutting a forestry area). Last week, (again see the Carmarthenshire Moth blog), I recorded it in the Sawdde Valley, just north of Mynydd Du, but essentially still in the eastern part of the county.
I`ve never seen it in the well-recorded south-east of Carmarthenshire (the Llanelli area/Coalfield etc) and I was wondering if it occurred in the western part of Glamorgan? It`s very easy to recognize! 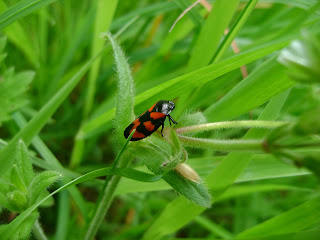