An opulence of willow blossom

An easy-to-identify willow is the almond willow Salix triandra - it has a characteristic `jizz`, with a quite twiggy branch structure, smallish glossy mid-green leaves  and flaking bark. It is not a native but is planted occasionally as part of landscaping schemes, as in the photos below from the Pwll section of the Millennium Coastal Park, Llanelli. In Carmarthenshire, it is also occasionally encountered elsewhere, as it was once grown - along with other willows - for basketry; hence it occurring at Pontnewydd in the Lower Gwendraeth Valley and a stand that, until recently, grew where the main coast road now is, on the coastal flats east of Morfa, Llanelli.
It is a small willow and always floriferous - making it perhaps suitable for a wild garden and, like all willows (except the native S.cinerea and S. caprea), it is easily propagated from cuttings. The density of flowers (note that it has three stamens per floret, hence the specific epiphet `triandra`) must surely also make it a good moth lure early in the season. 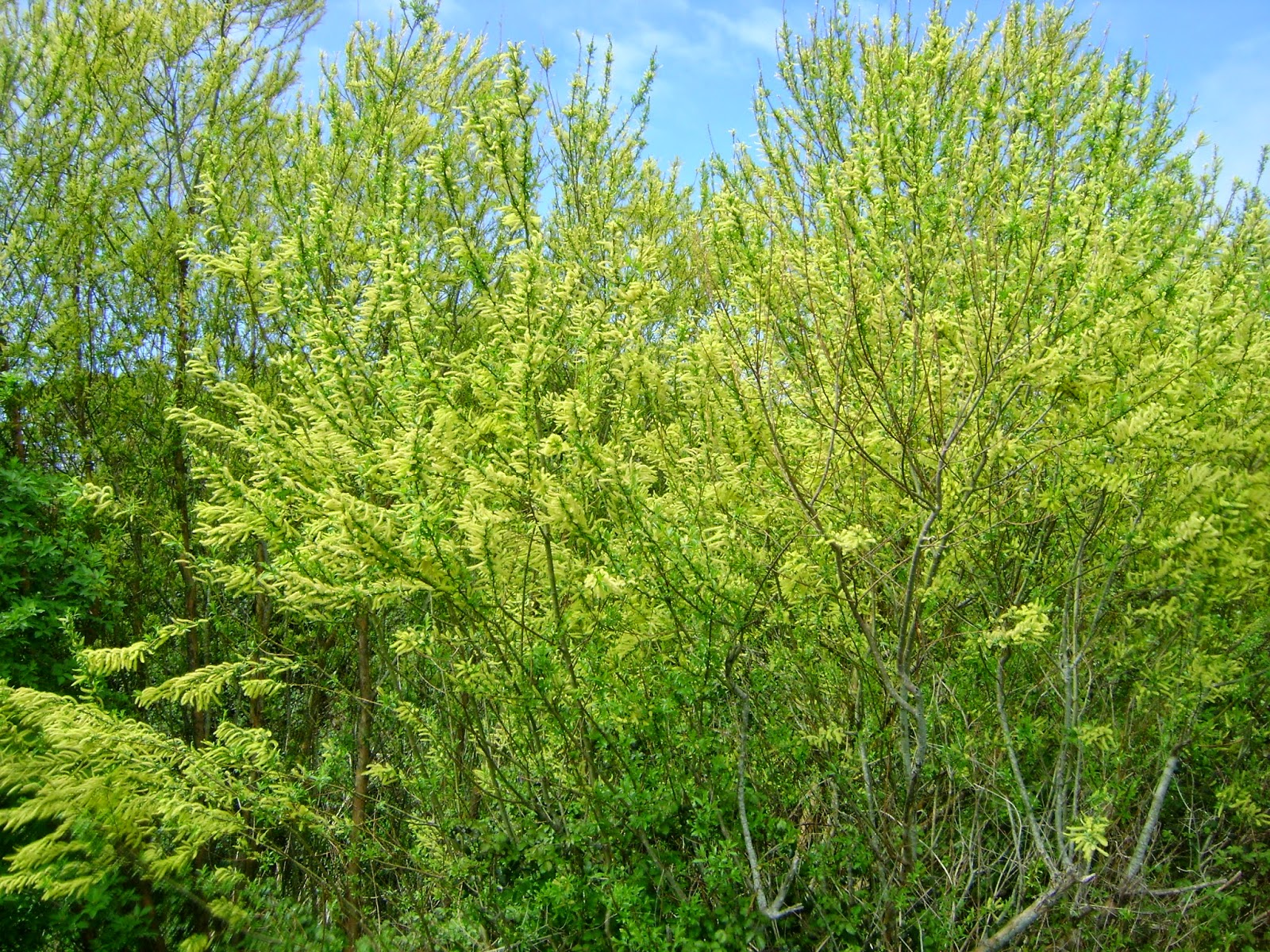 Above: a general view of one of the Pwll almond willows. 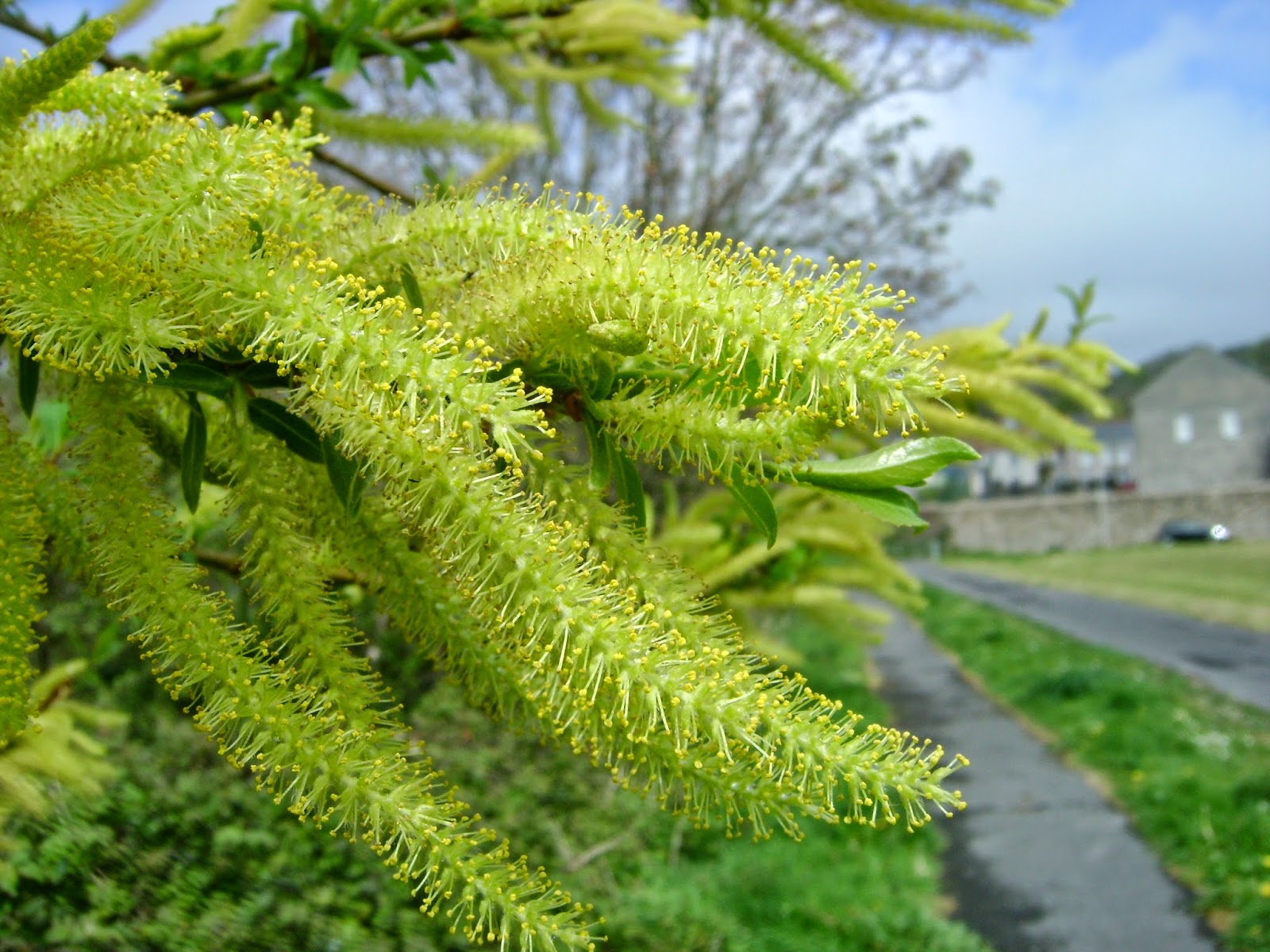 Above: close-up photo of the flowers. 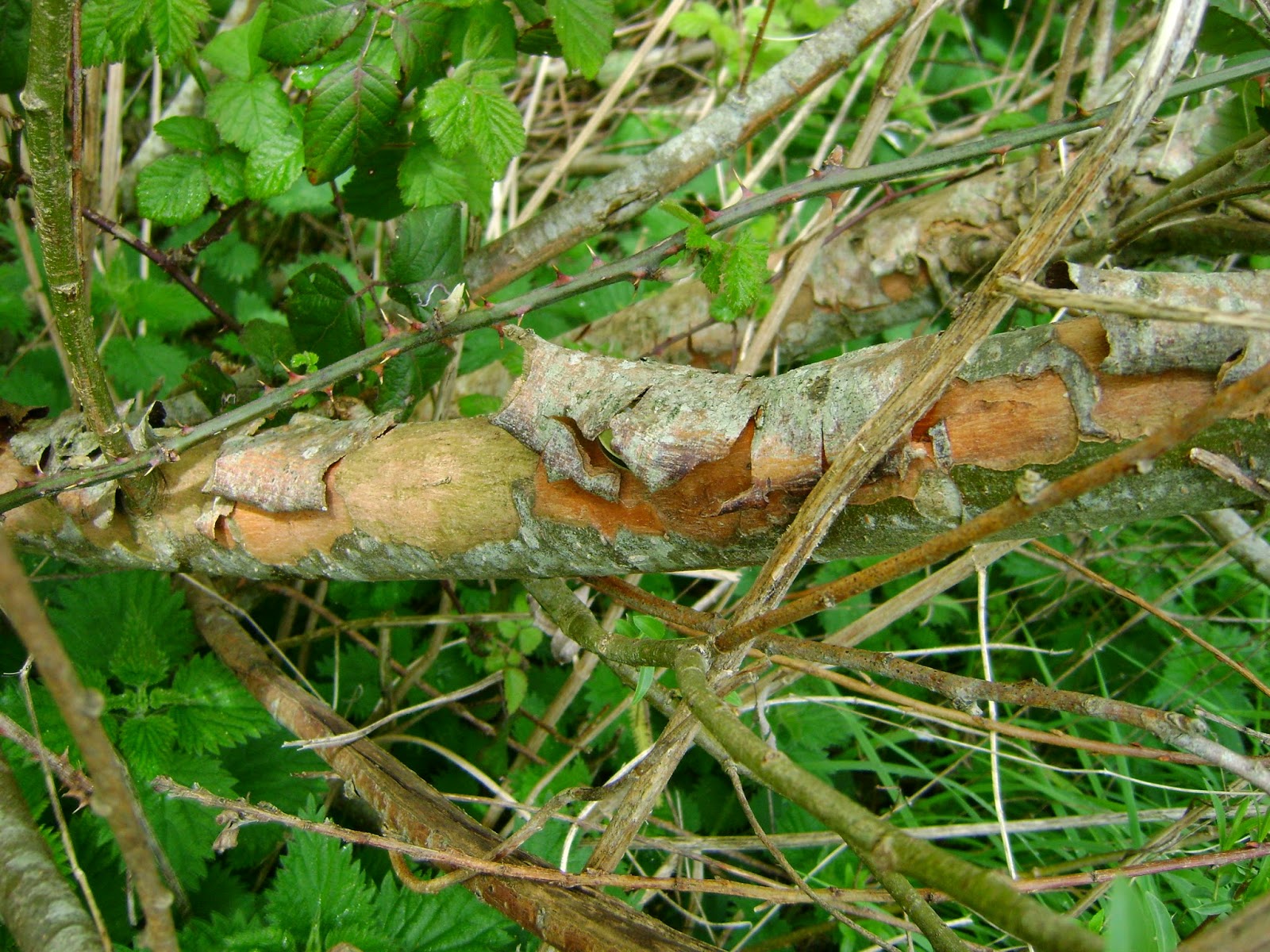 Above: the peeling bark that occurs on the older branches and the trunk.

About twenty years or so ago, I undertook much recording of willows in Carmarthenshire to assist George Hutchinson (then of NMW). George subsequently published the results in the Llanelli Naturalists Bulletin:
Hutchinson, G. (1996) - Salix (willows) in Carmarthenshire: a guide to identification. Llanelli Naturalists Bulletin 2:23-33.
[includes some brief notes on distribution in Carms and actually includes a very high proportion of the willow taxa found in Wales, with photocopies of typical leaves etc, so also very useful for vc41]
Posted by Ian Morgan at 09:21 2 comments:

Yesterday, we attempted to relocate two of Gower's scarcest plants, both known to grow at Notthill above the rather scenic Threecliff Bay. We were fortunate in that we inadvertently stumbled upon the the first of these before we'd even started looking; Upright Chickweed Moenchia erecta. Initially discovered new to Glamorgan by Quentin Kay as recently as 16th May 1992, with a few other small populations found subsequently in the local area, this is still a very rare plant and the original 9m x 1.5m colony is now reduced to 1.5m x 1m (that's assuming it was the same colony we stumbled upon?).
The other target was Lanceolate Spleenwort Asplenium obovatum, a species I've looked for unsuccessfully on two other occasions. Fortunately the site has recently received management that has removed the dense growth of Bracken and Bramble that was covering the wall frontage on previous visits, providing much better access and visibility. A systematic search eventually produced five plants growing in the ORS conglomerate retaining wall, these presumably the same plants last seen by the late Tony Lewis on the 10th April 1998. It is not known whether this is E.F. Linton's Penmaen site of c 1900, so there always remains a possibility there could be another wall population of this unobtrusive species awaiting rediscovery.

Volucella zonaria is a new colonist to Carmarthenshire, being recorded for the first time in a garden at Ralph Terrace (SS59) near to Llanelli`s town centre on 28th August 2013. In early September 2014, Jon Baker had one near the Tesco store at Carmarthen (SN41) and last week (hence this brief blog), I was made aware of another sighting, by Llanelli Naturalists member Veronica Haines, literally just down the road from me at Pwll, Llanelli (SN40) on 31.8.14. Look out for it in your gardens in late summer 2015!
Veronica managed to photograph this spectacularly large hoverfly and I include her photo below. Click on it to enlarge.

Another insect that has been doing well in Carmarthenshire in recent years is the hornet (which the above hoverfly mimics), with most records around the Llandeilo/Tywi Valley area.
Posted by Ian Morgan at 13:45 2 comments: