'Sausage Beard-lichen (Usnea articulata) is one of Wales’ most spectacular lichens. It can grow more than 1 metre long and is often 30-40cm in length...' To read more about this distinctive lichen click on the very useful information sheet produced by Natural Resources Wales. 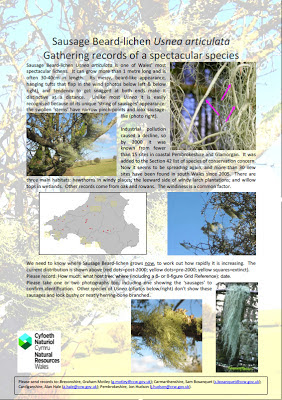 Posted by Barry Stewart at 13:22 No comments:

Last year three instances came to light of Hottentot-fig (Carpobrotus edulis) having been planted at sites on the South Gower coast; at Bracelet Bay, Rotherslade and Horton. Despite its inclusion on Schedule 9 of the Wildlife and Countryside Act, which makes it illegal to plant or introduce it in the wild, it is sometimes unwittingly planted at sites where it presents a risk to native flora. The image above shows the plant at Rotherslade, which not only had draped down the wall where it could be broken up and washed away to new sites by the sea, but was actually noted to have shed stem sections.
Thankfully Sean Hathaway from the City and County of Swansea has organised and carried out the removal of the plants at Bracelet Bay and Rotherslade (the latter filling 19 waste bags) and has informed me that the Horton plants are also to be dealt with shortly, so for the time being all appears well. However, it is possible that material has been swept to other parts of the coast, so please do let Sean or myself know if you see this highly invasive plant anywhere near the sea, planted or otherwise.
Posted by Barry Stewart at 18:40 1 comment: 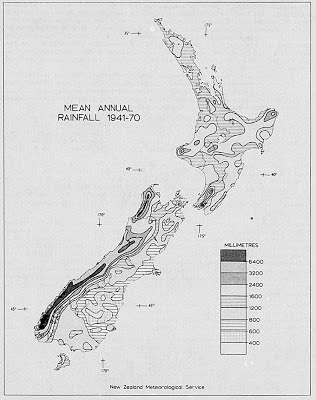 Reminder to Gower Ornithological Society members and guests. We have an indoor meeting on Friday of this week: 7.15 at the Environment Centre Pier Street Swansea (£1 entrance fee).

Dave Rich's illustrated talk on New Zealand is the product of two visits to this distant land. The contrasting scenery between the high Southern Alps and the geothermal springs of the North Island together with some of the Island's flowers and unique birdlife will inspire others to visit 'The land of the long White Cloud'.

Peter Douglas-Jones signing for the secretary, who is seeing the subject matter for himself.
All welcome.
Posted by Barry Stewart at 16:15 No comments:

The frogs in my garden have been passionately calling away since the start of February with the first spawn being recorded on the 6th February. They are still calling today and more frogs are aggregating in my tiny garden pond. The maximum number I have counted at any one time is 38 frogs.

Interestingly, many male frogs have remained in the pond all year round and have been calling for mates every month of the year which is far from an effective strategy (!!) and must increase the risk of predation and reduction in fat resources. I wonder if this is an isolated event or is perhaps a phenological mismatch that is occurring elsewhere......

Yet more signs of spring...

Lew wrote 'I came across three Adders together in the mouth of a hole in rocks at Oxwich today [19th]. This one came out to bask but tucked its head away as soon as it curled up, unlike the one which posed so beautifully yesterday when I didn't have a camera.'
Posted by Barry Stewart at 16:27 No comments:

The early bat catches the moth ?

I was sat in garden last night listening to the resident song thrush giving it his all when I saw my first bat of the year. I sadly did not have my detector to hand but it was a clearly a pipistrelle flying very, very low indeed. It is certainly not the ideal time for bats to emerge from torpor and I wonder is anyone else has seen any bats flying recently, and if so, please could you let me know (d.w.forman@swansea.ac.uk).

Not staggering occurrences but signs of spring. P.S. Where's it gone today?
Posted by i.f.tew at 13:12 2 comments: 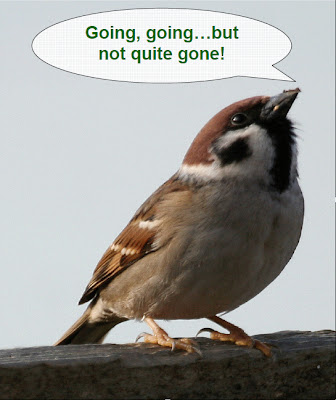 Gower Tree Sparrow Project are giving a short talk about our small & elusive Knelston population of Tree Sparrows and how they need your help!

Click HERE to see flyer
Posted by Barry Stewart at 12:28 No comments:

spring is on the way

Today in the university.
Bombus terrestris and Scaeva pyrastri @ Crocus and Episyrphus balteatus @ Dandelion.
Added to Frog spawn about 3 weeks ago on the north side of Cefn Bryn and baby Mallard and flowering Blackthorn at Slimbridge yesterday and I'd say there's scope for hope.
Posted by i.f.tew at 14:05 1 comment:

Sandra's close scrutiny of some images taken last night eventually revealed a rather over-hyped astronomical display by this near-Earth object!
Not quite Star Wars, this video flicks between two 30 second exposures, one minute apart, as the asteroid passed through the constellation of Ursa Major. This amazing experience was shared with the Minopoli family.
Posted by Barry Stewart at 22:07 No comments: 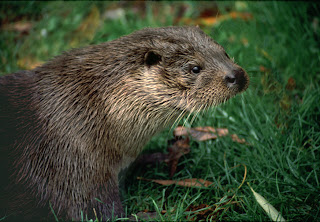 No - this otter is for illustration only, to head the blog.

My son, Gwyn Thomas reported that at 21.00 last night, 14th Feb, 2013, he observed three otters (judged to be a female with two well-grown cubs) in the sea off Kitchen Corner, Rhossili Bay.
The map ref: SS 40277 87609 for the location.
Kitchen Corner is the farthest south-west point of the Rhossili Bay cliffs, just before the Causeway on the left, looking out to sea.
These were making their way from the causeway (Crabart) towards the bay, at a distance of around 10 metres out from the rocks.
Sadly the light was too poor for his camera-phone to record an image, though they were well illuminated by his headlamp.
They were uttering squeaking contact calls to each other, with which Gwyn is familiar, and he has no doubt of the identification.
He reports that many dabs were about that night, and he thinks the otters were targeting them.
Certainly they are partial to sea fish - this is one eating a sea lamprey on the river Teme at Ludlow- 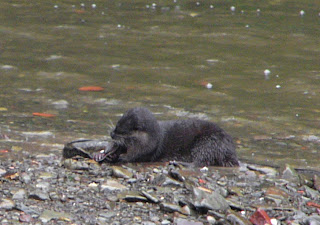 And they are common in the seas off the Western Isles, but I have had no experience of these in the seas of Gower. Are there any other reports of these?
I should welcome comments on this sighting.

The season for wind-pollinated trees is slowly coming upon us. Hazel catkins are becoming more conspicuous but a few evergreens are beginning to produce pollen too, such as this male Yew (Taxus baccata) in Cwmdulais. 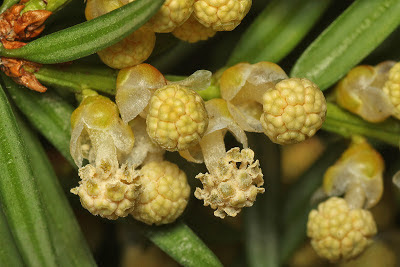 Clusters of pollen cones on several pine species are now also beginning to swell, as with this Monterey Pine  (Pinus radiata) growing on the roadside at Heron's Way. 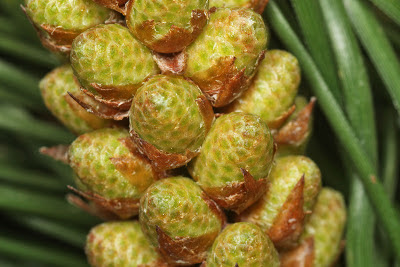 Note the clean, adpressed scales of the bud topping the male cones of the Monterey Pine [top image below], compared with the recurved and ciliate bud scales of a Maritime Pine (P. pinaster) growing roadside in Penclawdd, Stone Pine (P. pinea) at Mewslade and the resinous papery scales of an Austrian Pine (P. nigra subsp. nigra) growing in Gorseinon.
Posted by Barry Stewart at 08:32 3 comments:

Squeezing iron out of a stone

Iron is the second most abundant metal on Earth (next to aluminium).  About 3000 years ago human beings figured out how to extract it from rock, a skill that catapulted mankind into an era of self-determination and dominion over nature. Yet some crustose lichens, which grow on and in stone, have been doing this quietly for millions of years. Take a walk along forestry tracks into the hills in any of the valleys in Neath Port Talbot and look out for rusty-red stained rocks colonised by these amazing organisms. Two species, in particular, should draw your attention. 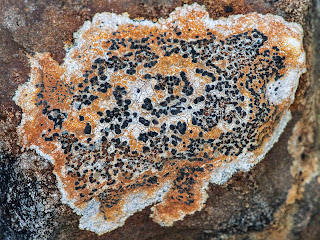 Lecidia lithophila (above) is a fairly common upland lichen able to extract iron from rock, which results in an attractive stone mosaic with characteristic rusty staining that is difficult to miss. The black pimples are apothecia, spore producing structures formed by the fungal part of the lichen. 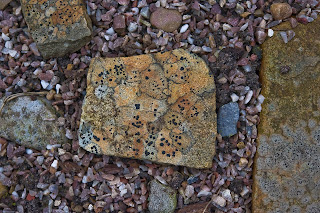 Porpidia macrocarpa (above) can also do this, often with much greater effect so that the whole of the surface of the stone can become rusty-red in colour. Note the very large black apothecia (up to 3mm in diameter) which are a characteristic of this species.
While an ability to make a living growing on rock has to be admired, extracting iron out of stone is something else!
Posted by Charles Hipkin at 19:51 No comments:

Lesser Yoke-moss (Zygodon conoideus) is a frequent epiphyte on trees in our area, an epiphyte being a plant that grows on another plant, using it only for mechanical support, and unlike parasitic plants does not derive any nutrient from the host plant. So what about a plant that grows on a steel pipe? Blueish Veilwort (Metzgeria violacea) is clearly a resourceful epiphytic liverwort and is seen here growing 'epi-pipe-ically' below a bridge in Crynant. Only one aspect of the painted pipe appears to provide the right conditions, but here the plant is able to flourish on this unusual habitat. The close up image shows the distinctive thin branches bearing pom-pom tips, in fact made up of clusters of gemmae (asexual reproductive propagules). 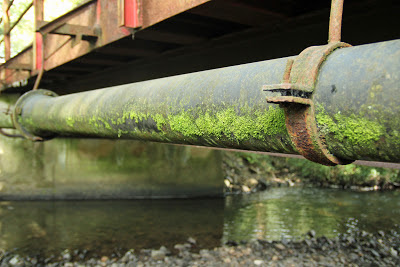 Whiskered Veilwort (Metzgeria consanguinea) is closely related to Blueish Veilwort and is shown here growing epiphytically on the stems of Gorse at Cwmgwrach. A key feature separating it from Blueish Veilwort is that the gemmae don't form pom-pom tips at the branch tips, but are spread along the edges of the thin branches.

Posted by Barry Stewart at 21:43 No comments:

Not much news from Alveley (Rhossili) this week; just our resident Buzzard being continually mobbed by the local Carrion Crows. These pics were on two separate days, and they rarely left the Buzzard alone to get on with its regular mousing and worming. The male crow is nearly the size of a Raven, with a beak to match.
They are surprisingly aggressive so far out of the breeding season. Buzzards soon learn to live their whole lives under continuous mobbing from one source or another. 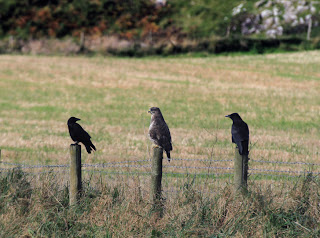 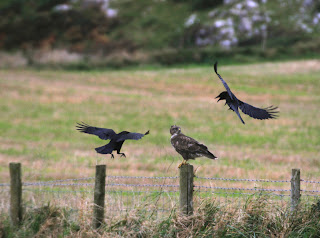 Posted by gareth thomas at 19:21 No comments:

Some pictures from Gordon Howe of the recent shellfish strandings in Rhossili Bay over the last few days; it is worth noting that many of the shells still had the animals inside them.  If anyone can explanation what's been happening it would be interesting to know.