Dominic Davidson found this Long-billed Dowitcher at Kidwelly Quay yesterday evening and it was still present this morning and showing reasonably well while I was there. Like the bird I saw many years ago at the Rhymney River it was associating closely with Redshank and appears to be quite loyal to the area in front of the carpark and down to the railway bridge. 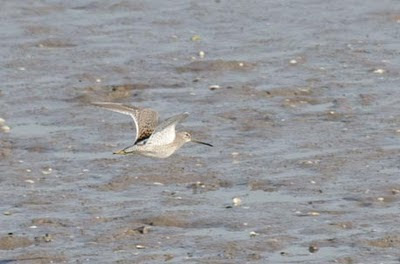 A few record shots of the bird which seems to be pretty far along its moult into 1st winter plumage. Congratulations go to Dom on a very nice fine which I was very pleased to watch this morning. The light is great at this location in the morning and well worth the effort.

Not really Gower, but good to go a little further afield every now and then!
The cliffs to east of Aberthaw are home to the Service-tree (Sorbus domestica) and yesterday Julian Woodman kindly showed Polly Spencer-Vellacott and myself specimens of this vulnerable tree during a BSBI site visit. The trees we examined were all barren, although Julian said that fruit is produced some years.
The very rare liverwort Green Blackwort (Southbya tophacea) also grows on the cliffs at this site and the sole Glamorgan population seemed to be in good health with much vibrant new growth.
On the cobble beach, in the patches of wet sand below the main shingle ridge were clusters of the green flatworm Symsagittifera (Convoluta) roscoffensis. Interestingly this species does not ingest food, but derives its nutrition from symbiotic green algae that live within the animal itself. When the tide goes out these the worms emerge from the sand and bask, allowing to algae to photosynthesise.

This lustrous ibis was found and photographed by Gary Harper this morning, making it three years in a row that this species has turned up in Carmarthenshire during September.

Posted by Barry Stewart at 21:55 No comments:

A morning with waders on Weobley causeway 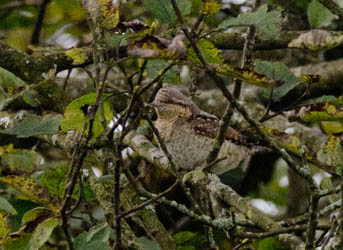 Following close on the heels of the cryptic autumnal moths is this cryptic passage migrant bird. Barry Weston found this very nice Wryneck on a local patch and is good reward for watching the same area with some regularity at this time of year. Although not particularly shy the tendency for this bird to spend long periods feeding on the ground did make it difficult to see. Its plumage is stunning but its very deliberate and busy nature in bushes does seem to waste its amazing camouflage.

I took a bit of video of this bird when it was still a fair way off and the quality is not good but you do see a bit of its behaviour and welcome partiality to sit out in the open on occasions.

Whinchat by the Lunnon turning yesterday, photographed by Alun John.

Posted by Barry Stewart at 09:23 No comments:

Yesterday Veronica Shenston showed me the shell of a Violet Sea Snail (Janthina janthina) that she picked up on Whiteford beach on 30th July this year (the larger one shown below). At the time a few other specimens had been found in Cornwall, but strandings do appear to be quite a rare event. Veronica found the smaller of the two shells on a previous occasion and it would be interesting to find out if anyone else has discovered this species on our shores. 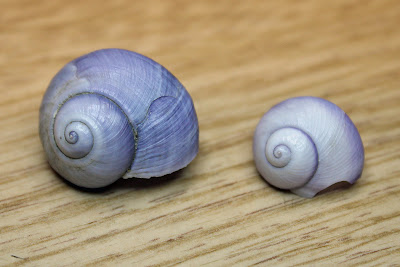 Violet Sea Snails are warm-water animals that float around the oceans attached to bubble rafts they make out of chitin and prey on jellyfish, particularly by-the-wind-sailors (Velella velella). I'd guess therefore, are more likely to be found during mass strandings of these. I forgot to ask Veronica if she found any at the same time?
Posted by Barry Stewart at 09:04 8 comments:

Although the number of species of moth declines during the autumn there are one or two attractive species that appear on the wing, none more so that the Merveille du Jour (Dichonia aprilina). This 'mint-choc-chip' moth flies from mid-September to the beginning of November, with numbers peaking in the first week of October.
Another cryptic species with a similar flight period is the Brindled Green (Dryobotodes eremita), which like the Merveille du Jour is principally a woodland species, but both appear in gardens in areas wherever there are oaks.
Both species were in the garden moth trap yesterday along with
Brown House Moth (1)
Celypha lacunana (1)
Light Brown Apple Moth (1)
Dusky Thorn (1)
Lesser Yellow Underwing (16)
Large Yellow Underwing (29)
Setaceous Hebrew Character (18)
Square-spot Rustic (8)
Autumnal Rustic (5)
Black Rustic (20)
Large Ranunculus (2)
Pink-barred Sallow (5)
Frosted Orange (2)
Silver Y (6)
Straw Dot (1)
Posted by Barry Stewart at 09:34 1 comment:

A collection of pics of the Yankee waders still present today as described on the post below. Probably too many photos but after such a great day I'm still buzzing! Good to see a few familiar faces enjoying the scenes and long may they continue.

Following up on Chris Brewer's report of some interesting waders at Weobly, Mark Hipkin and myself set off over the marsh this morning with a little bit of optimism, but not that much to be honest given the vastness of the search area. After seeing nothing but Wheatears for most of our trek, we were amazed to find a Pectoral Sandpiper, a White-rumped Sandpiper and a Curlew Sandpiper exactly where Chris had told us he'd seen his two odd birds. Also in a nearby pill was a Great White Egret and a Little Stint also put in a brief appearance. Not to be outdone, Neil Edwards found a Buff-breasted Sandpiper in exactly the same spot this afternoon completing a hat-trick of trans-Atlantic waders on the Burry - a truly unprecedented event in our area and certainly a day I'll be talking about for years to come!

Fungi This Weekend in the Neath and Afan Valleys

It’s been a bit of a slow start, but fungi are now popping up on the coast and in the forests. Fairy Ring Champignon (Marasmius oreades) is present in abundance in the fixed dune grassland on Crymlyn Burrows at the moment (photo below). 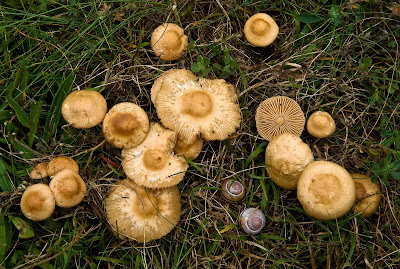 Grassy verges at the edge woodland near Ton Mawr have lots of the Common Cavalier (Melanoleuca polioleuca). Look for the grey brown cap and the twisted, fibrillose, dark-grey stalk. The white gills leave a distinct gap where the stalk meets the cap (photo below). It’s a very common species, but often puzzling and frequently misidentified. 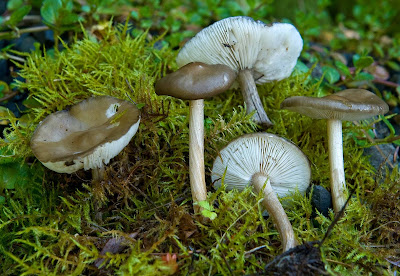 Sitka Spruce forests are not renowned for their biodiversity, but they are often home to some attractive fungi. The forests around Gyfylchi are good places to look for Fruity Brittlegill (Russula queletti). The beautiful wine-red cap is supported by a stalk that gradually becomes suffused with the same colour. The gills are a pale creamy yellow in mature specimens. It is not a common species generally, but it is frequent in the Sitka Spruce forests of the Afan and Neath Valleys. 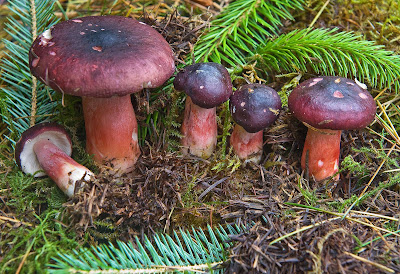 Sheathed Woodtuft (Kuehneromyces mutabilis) is one of the most common toadstools that occur in clusters on decaying tree stumps. Another is Sulphur Tuft (Hypholoma fasciculare). 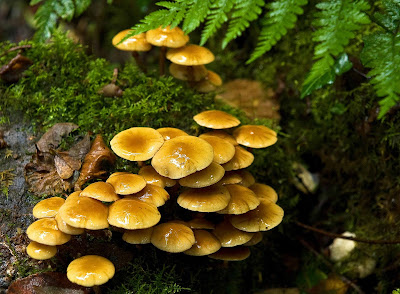 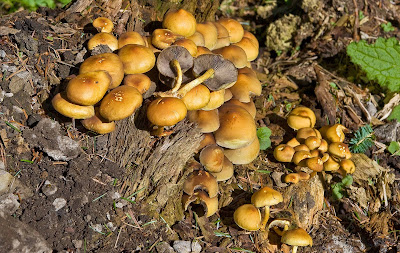 Posted by Charles Hipkin at 19:32 No comments: 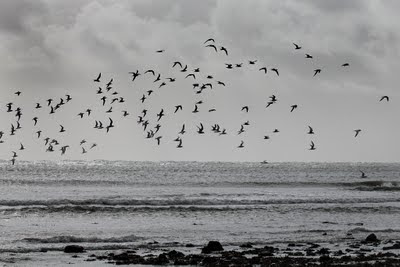 Yesterday morning there were 108 Sandwich Terns on the beach at Port Eynon, this being by far the most reliable place to see the species in Gower during the autumn. Records on the (incomplete) database show that the third week of September is likely to produce the highest count. Other species occasionally mix with the flock, so there's always a chance of something a bit more unusual. 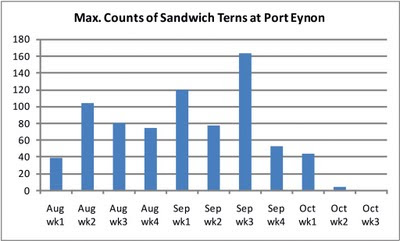 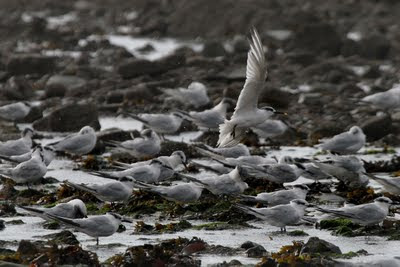 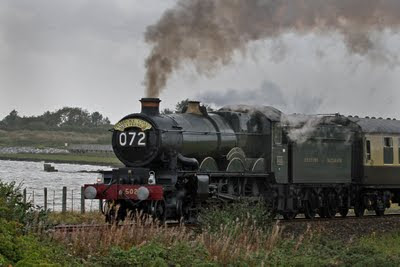 We're not train spotters, but I have to say that we enjoyed hearing, watching and smelling this steam train as it crossed over Loughor Bridge today, which made up for the lack of birds there!
Posted by Barry Stewart at 20:46 1 comment: 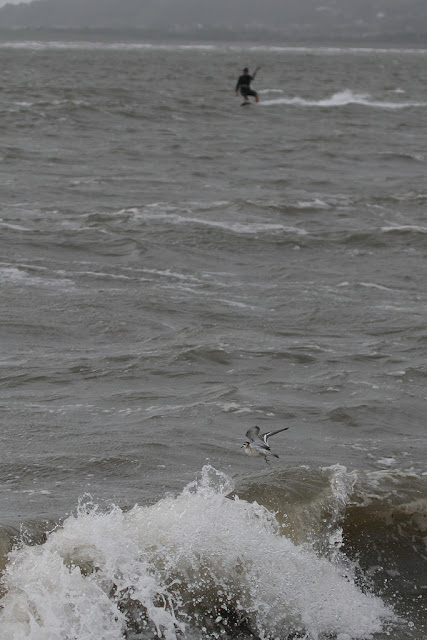 This very juvenile bird was found earlier today by Ian Hainsworth in the mouth of the Afon Lliedi. By late afternoon it had reloacted to Llanelli beach and seemed quite oblivious to the kite surfers. 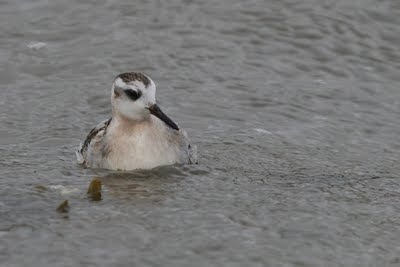 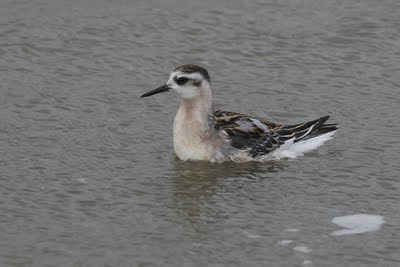 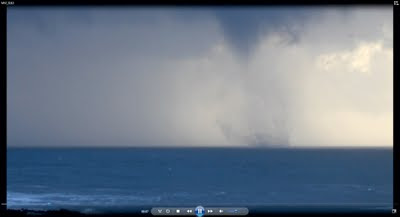 Whilst seawatching with Chris Brewer this morning a 'tornadic waterspout' drifted past, probably a mile and a half off-shore. Whilst not that dramatic at this range, it must have been pretty blowy for anyone/anything caught up in it. I've uploaded some video to http://www.youtube.com/watch?v=Bnp_h8SuJg8 but it's very low quality and I will try and improve the quality when I find time as the high resolution file is appreciably more atmospheric.
Posted by Barry Stewart at 12:55 No comments:

At Rotherslade today Heath Groundsel (Senecio sylvaticus) was noted growing in areas of burnt Gorse, detected initially by its highly pungent smell. This rather localised plant is probably most frequent along disturbed forest tracks in our area, coastal records being less frequent.
Bermuda Grass (Cynodon dactylon) is a long-established alien of Swansea's sandy sea-front, this being is it's only Welsh locality as far as I know. Here it frequently dominates the sward of unmanaged areas of grassland as shown below at Norton as well as maintained lawns at Blackpill. The fingered inflorescence is highly distinctive and worth looking out for next time you walk, run, jog, cycle or skateboard! along the promenade.

Posted by Barry Stewart at 21:25 No comments:

Of 29 Med Gulls seen in Bracelet Bay this lunchtime, 3 were colour-ringed birds. We know the origins of two of them; Red YHE8 is a Serbian breeder and White 3K80 hails from Belgium, where it was hatched in 2006. Green 3T9 is a new bird, for me at least, obviously ringed in 2011, but difficult to determine where using the Euring website, but I should find out shortly. In addition to the Bracelet Bay birds we also saw 26 at Blackpill and a few others dotted around the Mumbles area. There was also colour-ringed Herring Gull marked with orange letters BBX on a blue ring, most probably a Gloucester landfill bird? 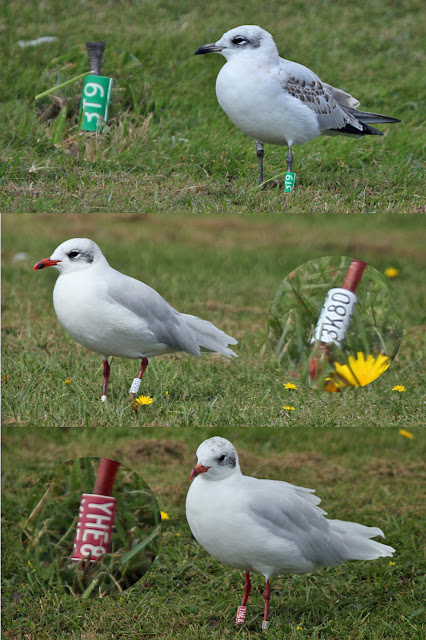 A good tip for anyone not sure how to tell a Mediterranean Gull from similar species is to check the wing-tips: If they are all white then chances are you are looking at an adult Med. Gull, but note that younger birds have dark wing tips, as shown in the top example here.
Posted by Barry Stewart at 20:40 3 comments: