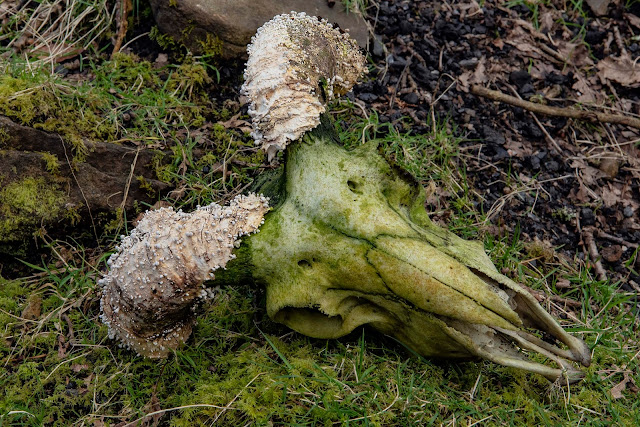 We came across this ram's skull on a walk in Nant-y-gleisiad Wood, near Resolfen. The decaying horns were covered in Horn Stalkball (Onygena equina), an ascomycete belonging to a specialised family called the Onygenacea. Both horns were covered completely in a creamy-white mycelium which had given rise to hundreds of stalked fruiting bodies, like little puffballs. In fact it used to be called Horn Puffball although it is not even closely related to the puffballs, which are basidiomycetes. 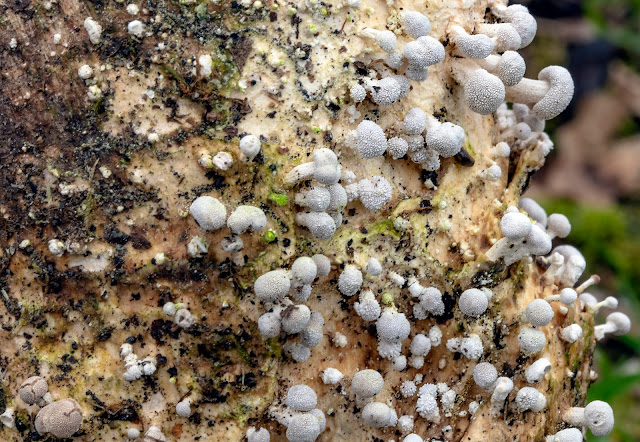 The rounded heads of the young fruiting bodies are white and covered with masses of chlamydospores while ascospores are produced from within. As the fruiting body matures it cracks and turns brown, releasing the ascospores.
What is strikingly obvious is that the fungus is confined to the horns and does not grow on the bony tissue of the skull. Horns are not made of bone but are built out of keratin, a structural protein found in hair, nails, hoofs, skin, spines and feathers. Fungi like Onygena equina are able to break down keratin to amino acids which are excellent organic nutrients, rich in nitrogen. It will also grow on decaying hoofs and this is perhaps where it got the species name equina.
Onygena equina is not common. Most records of it originate from Scotland but there are very few recent records from Wales. As far as I can tell, this is the first record of this species in Glamorgan (VC41).
Onygena corvina is another rare species found in Britain which grows on feathers.
Posted by Charles Hipkin at 22:11 3 comments: