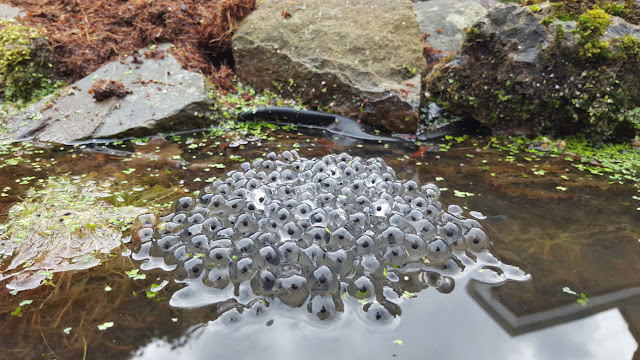 Given all the mild weather we've received this winter I'm sure there are plenty of earlier spawning dates, but after a few nights of high activity I saw our first Gorseinon garden spawn this morning.
Posted by Barry Stewart at 11:30 1 comment: 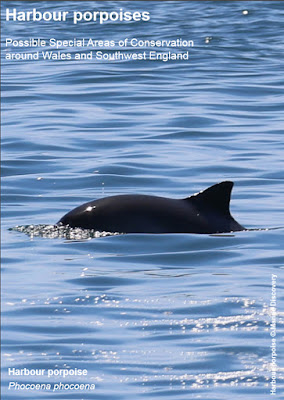 The harbour porpoise proposed SACs consultation is finally open, until 19th April and can be accessed HERE.
Posted by Barry Stewart at 11:24 No comments: 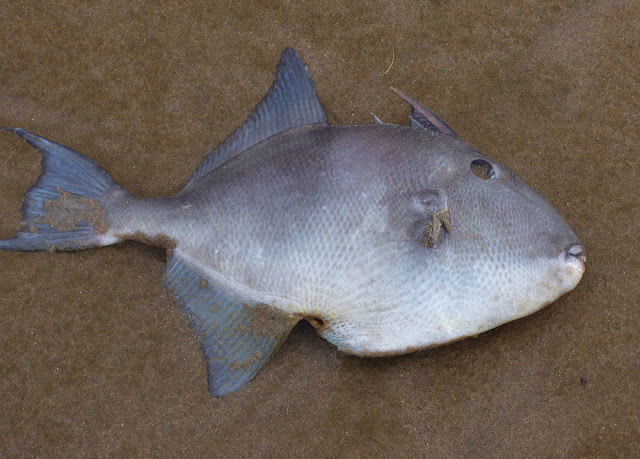 (c) R. Part
Rein Part sent me this image of a Grey Triggerfish Balistes capriscus that was washed up on Whiteford Beach on 5th January, possibly the same fish I saw there in a more decomposed state on the 19th? A quick web search shows that this rather exotic-looking species has increased dramatically in British waters in recent years.
Posted by Barry Stewart at 10:43 1 comment: 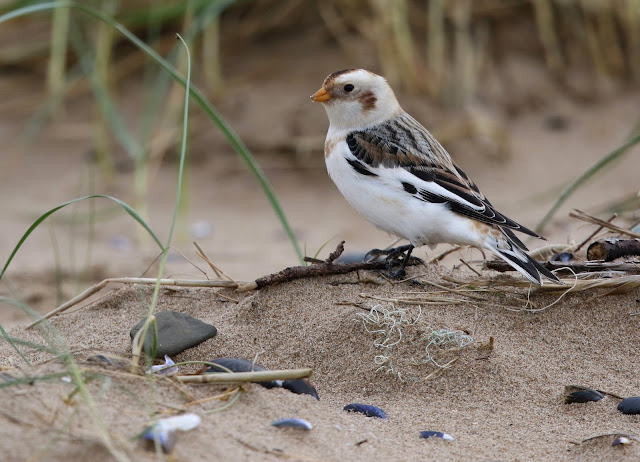 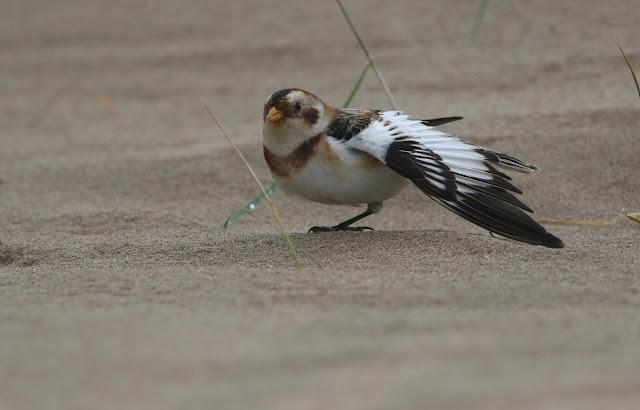 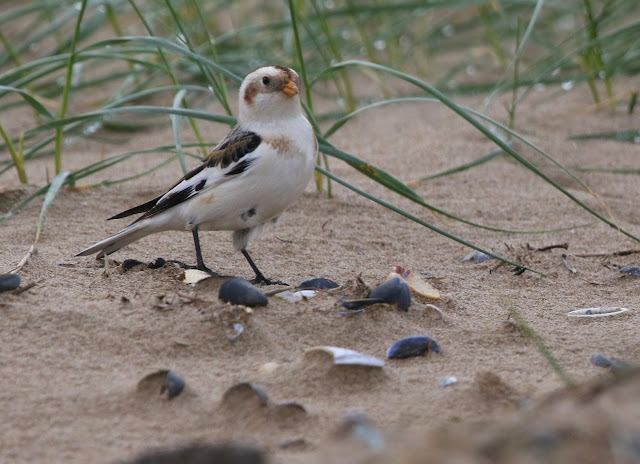 Steve and Ann Evans kindly invited me to view a Lesser Whitethroat (depicted above) in their Llanelli garden. They initially saw it before Christmas, but after a long period of absence, the bird reappeared last week following the onset of cooler weather. This is now the third over-wintering individual of this species that I have seen in our area, each one closely associated with a garden feeding station: Bridgend [Feb-05] photo below and Skewen [Dec-10] for details/pics, click on link HERE.
Racial identification of these and other wintering birds is problematic and it seems even genetic studies cannot provide conclusive answers based on current knowledge of the complex. However, general characters such as the extensive pale brown tones of the mantle extending up onto the hind-neck, pale ear coverts and long-tailed/shortwinged jizz appear to place the Llanelli bird more clearly in the 'Central Asian Lesser Whitethroat' clade than the previous two birds mentioned, with halimodendri being the most likely race.
Posted by Barry Stewart at 10:25 1 comment: 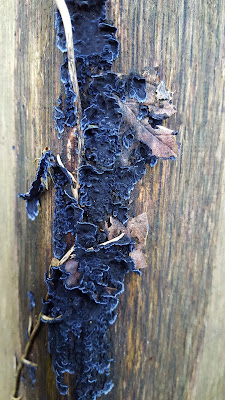 Cobalt Crust Pulcherricium (Terana) caeruleum is a particularly striking fungus that is typically found on the underside of fallen logs and dead branches and therefore requires a little searching for. However, its appearance on the gatepost at the entrance to Oxwich Wood required no searching at all and provided a great opportunity for closer inspection in good light. It will be interesting to see how long the fungus persists for at this easy-to-monitor site. 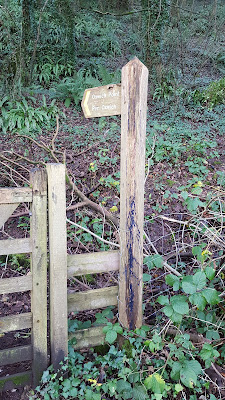 For details of some of the bryophytes seen on the same visit check out South Wales Bryophytes
Posted by Barry Stewart at 09:24 1 comment:

The Gower Ringing Group at Oxwich: the story so far


Since early 2013 we have processed over 10,000 birds on the marsh.  In 2015 we completed twice weekly ringing visits during passage periods and weekly sessions at other times, and processed 3,925 unique birds during the calendar year (this total includes birds recaptured [following initial ringing in a previous year] and controlled [ringed by someone else and recovered on the site] for the first time during the year but excludes multiple recaptures).

The data set emerging is both valuable and interesting.  It indicates, for example that while the site currently supports relatively small numbers of reed and sedge warblers, far larger numbers occur during autumn passage.  We have controlled reed bed warblers ringed in France and Spain, providing an indication of the areas these birds stage in on migration, and perhaps more unusually (in late November 2014) a Cetti's warbler ringed on Magor Marsh, Monmouthshire (which illustrates their ability to colonise new areas of habitat).

In 2015 we also managed to prove breeding in grasshopper warbler on the marsh, through the capture and recapture of birds at intervals during the breeding season, including a female with a brood patch, a male with a cloacal protrusion and recently fledged juveniles.

We have also ringed over 300 reed buntings, as well as recapturing a few additional venerable birds from when Barry Stewart ringed on the marsh (the oldest to date being a breeding male in excess of seven years of age).  Data are starting to come in relating to the movements of these reed buntings, which range relatively widely, and have been recaptured at the Nitten Field, Mewslade, and at Cefn Sidan, Carmarthenshire.  Numbers on the marsh vary over the year, with an apparent exodus in mid-winter, and large numbers in late winter / early spring and in autumn (peaking in September).

We put out two feeders at Oxwich, both of which are stocked with sunflower hearts.  Since finches started using them regularly, in early 2014, we have ringed 805 greenfinch, 841 goldfinch, 456 chaffinch and 115 siskin around them.  There is still a very large greenfinch population in Gower (despite trichomonosis), as recoveries of these birds (mainly cat kills and birds that succumb to disease) are typically from surrounding villages such as Scurlage, Knelston and Reynoldston (all of which are within ~5 km).  Goldfinch disperse more widely, and some move to and from continental Europe.  We await a large movement, albeit a goldfinch retrapped on Lundy in spring 2015 was interesting and we are getting good data on timing of breeding.  Siskins bred on the marsh in both 2014 and 2015, possibly due to the food source provided by the feeders, which they visited throughout.  Two separate cohorts of young were apparent in 2015, the first appearing at the feeders in May and the second in July, indicating the siskin were double brooded.

The numbers of these 'common garden visitors' ringed at just two feeders indicates that there is considerable turnover of birds during the day and over weeks at feeding stations.  Just for good measure, since February 2013 we have also ringed 898 blue tits at the marsh, also capturing some six year old birds of Barry's.  To emphasise the point further, in 2015 we captured 23 different great spotted woodpeckers at the feeders. With these sorts of numbers of common birds, noting the stage of development of the brood patch and recording moult accurately helps build up important data that will assist the British Trust for Ornithology (who hold a database of information on the 1 million plus birds ringed in the UK annually) in understanding how birds are responding to changing climate and food availability.

Ironically, given all the 'typical' migrants we catch, perhaps the most interesting recovery of a bird to date has also been of a 'garden bird' species.  A dunnock ringed at Creeting St Mary, Suffolk in 2009 was controlled at Oxwich in 2014, a movement of 364 km west.

Finally, we capture a lot of passage migrants, particularly in the autumn, when there is always a chance of a local scarcity due to the large area of undisturbed and varied semi-natural habitat present.  Among the species captured over the last few years have been wood warbler (Spring 2014), yellow-browed warbler (autumn 2014), an eastern cline / 'tristis' chiffchaff (autumn 2014), two whinchat (early autumn 2015), seven firecrests (late autumn 2013-15 inc), a redstart (early autumn 2015), a brambling (late autumn 2014), three jack snipe, 16 tree pipit (a small proportion of birds seen around / heard over the marsh), and 26 garden warblers.  None of these species are particularly common on Gower, albeit all will be under recorded to some extent due tot he relatively limited number of birdwatchers active locally.

The work over the last few years has only been possible due to the effort of Gower RG members, particularly stalwarts such as Heather Coats, Charlie Sargent, Cedwyn Davies and Keith Vaughton, the support of Nick Edwards of Natural Resources Wales, and the grant funding provided by the Gower Society.

For further information, please visit our blog, which is regularly updated, and which includes a detailed summary of ringing in 2015.  Links are:

Further photos are below

heres some photos of the 3 snow buntings along whiteford sands (SS434946). looks like an adult male and 2 female\ first winter birds. also , off shore, was a tired looking juv. gannet and a great northen diver.
A good start to the year considering the poor weather. 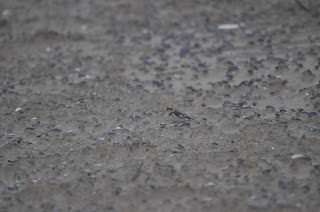 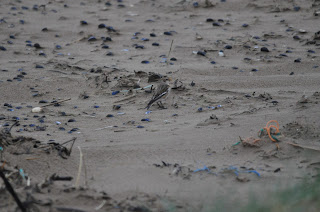 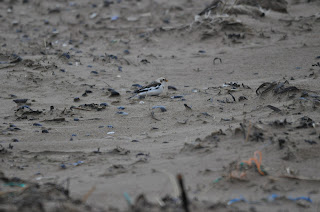 A bit of a gentle start to the year, made recording vascular plants in flower in the Mumbles area, between visiting friends and feeding the Mediterranean Gulls in Bracelet Bay. Excluding species that were obviously planted. we managed to locate 15 native/naturalised species in total, the most significant of which was probably a fresh spike of Ivy Broomrape Orobanche hederae on Mumbles Head. However, the most intriguing species was the inappropriately named Summer Snowflake Leucojum aestivum subsp. pulchellum; we only have a few records of the latter species in Glamorgan, so it was somewhat surprising that we noted it at three locations today, where it was flowering at each of them. It was particularly well established (with dozens of large clumps) in the woodland immediately adjacent to the car park in Caswell Bay, where it was first recorded as the binomial by the late Tony Lewis in 1997. The large green tufts of strappy leaves, with a sprinkling of white Snowdrop-type flowers is one to look out for and I'd be grateful of any reports.

Posted by Barry Stewart at 20:04 No comments: