First of all a big thank you to all the volunteers who helped out with the Beached Bird Survey this year.  Usually I mostly receive nil returns for this survey but this year there was only one nil return - indicating the exceptional year (we hope) it has turned out to be.


As a result of my earlier post on this blog requesting help for one stretch of beach I was inundated with independent records of beached birds found on numerous Swansea beaches (the power of electronic media).  Although strictly speaking these records were outside the data collected as part of the organised Beached Bird Survey I have collated these additional records and will submit them to the RSPB as a supplementary record.  Therefore, thanks also to everyone who sent in these additional records.


In total I received records of 984 birds (I received some reports of bird numbers but no breakdown of species identification so this total includes 92 unidentified seabirds).  One thing that is quite clear is that oiling does not appear to have played any part in these figures.
I have summarised the records as a combined total of the Beached Bird Survey and the independent records.  The figures in brackets relates to the Beached Bird Survey:


Rather grim reading I'm sure you'll agree and the severe weather clearly has taken its toll.  It will be interesting to see the size of the seabird colonies during the coming breeding season.


Posted by Alastair Flannagan at 15:55 No comments:

Philip Croft wrote:
The Fulmar is, for me, one of the most remarkable birds of my local patch, in the Mewslade area. They are outstanding fliers, manoeuvring with amazing ease and accuracy, even in strong, gusty winds. A few Fulmars breed in the area. Each autumn the birds disappear out to sea and for a while there are no Fulmars, with their characteristic stiff-winged flight, to be seen. They usually return in December and are then visible around the coast (with occasional absences) for the next nine months or so (photo taken on ). 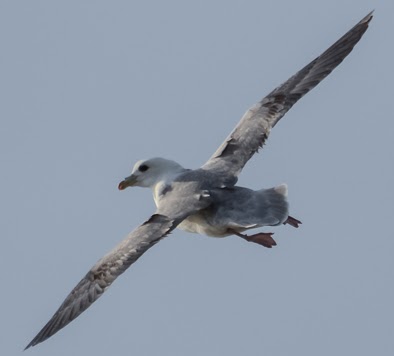 Although they bear a superficial resemblance to gulls, Fulmars are not closely related to gulls, and are, in fact, very different from them, both in structure and behaviour. They are “tube-noses”, with separate nostrils on the top of a rather complex bill. This feature is perhaps not very attractive, in what is otherwise a very beautiful bird (photo taken on ). 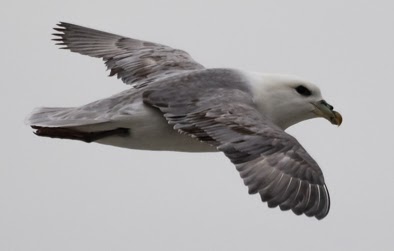 They are fantastically well-adapted to a life in the air and at sea. One of the delights of watching Fulmars flying close to the cliffs is observing how they use their feet as rudders (or ailerons?) for fine-tuning the steering. The legs are very close to the rear of the body and thus the feet are perfectly positioned for steering. Fulmars are as hopeless on land as they are brilliant in the air; those rear-mounted legs cannot support the bird and, at the nest site, they move by shuffling on their bellies.

This winter, birds returned at about the normal time. By mid January I was observing what I will call nuptial behaviour. Fulmars pair for life and are very long-lived (30 to 50 years is not uncommon). The pairs become separated during the time spent out at sea and re-establish the partnership in the breeding area. Mid January seemed very early in the year for nuptial behaviour to be so obvious, since Fulmars generally do not breed until May. In the third week in January, at one nest site in my area (site 1), a pair had become well-established and the birds were involved in frequent nuptial behaviour: widely opening the bill, gaping at each other, cackling; touching bill to bill; throwing the head back and cackling; head waving; neck-nibbling. They were also vigorously defending their site against potential intruders, as shown below (photo taken on ). 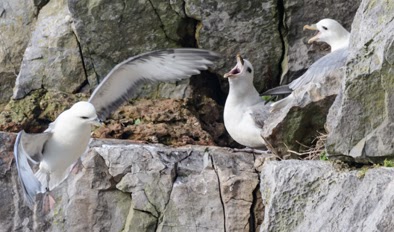 Repelling intruders also involves widely opening the bill and cackling; context is important in understanding what Fulmars are up to!

This behaviour has continued at site 1, with the addition of a ritual involving one bird bowing while the other opens the bill (photo taken ).

During February a pair has become well-established at another site in my patch (site 2). The birds at this site have been showing all the same nuptial and territorial behaviour as the pair at site 1. The site 2 birds seem to be even more demonstrative in their nuptial behaviour, with very frequent and noisy bill-gaping, bill-touching, rubbing their necks together, neck stretching and waving and an action which looks like one bird putting its bill inside the other’s open bill. I haven’t managed to capture an image of this action yet, but will keep trying! The photos below are of the site 2 pair displaying on February 22 and . 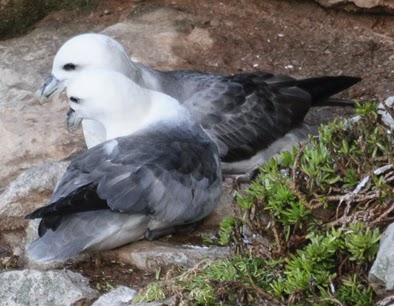 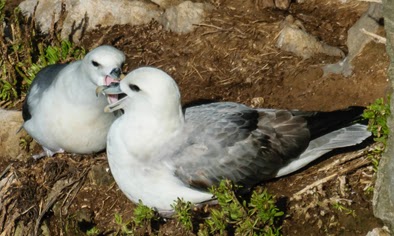 At both sites the birds (or one bird of the pair) will leave the ledge and fly around the area, apparently just for the joy of it! I think they are probably still roosting at sea because the birds are quite often absent if I visit soon after dawn. Both of these nest sites are in inaccessible positions: it is impossible to get really close to the nest. Both can be viewed and photographed from vantage points separated from the nest by sheer drops. These positions are not dangerous (as long as it is not too windy) and the Fulmars seem to be completely indifferent to my presence.

I’ll continue watching these two sites and will report again if there is any evidence of actual breeding.

Management along the Garden Lane, Oxwich

The Garden Lane at Oxwich separates two reed beds and is the back entrance to the Penrice Estate. Over the last few decades, the trees on either side of the lane have grown ever higher and encroached into the marsh.   Work is now underway to remove them, which will open up this area of the marsh and allow the reed bed to recover. 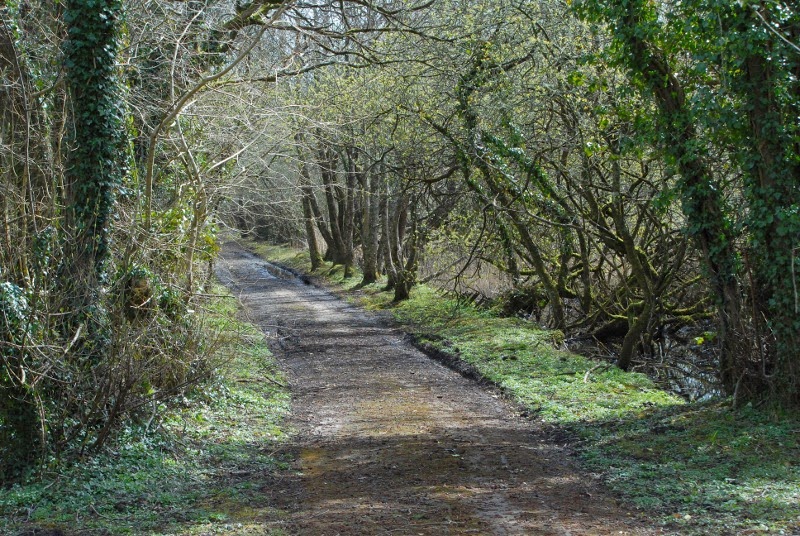 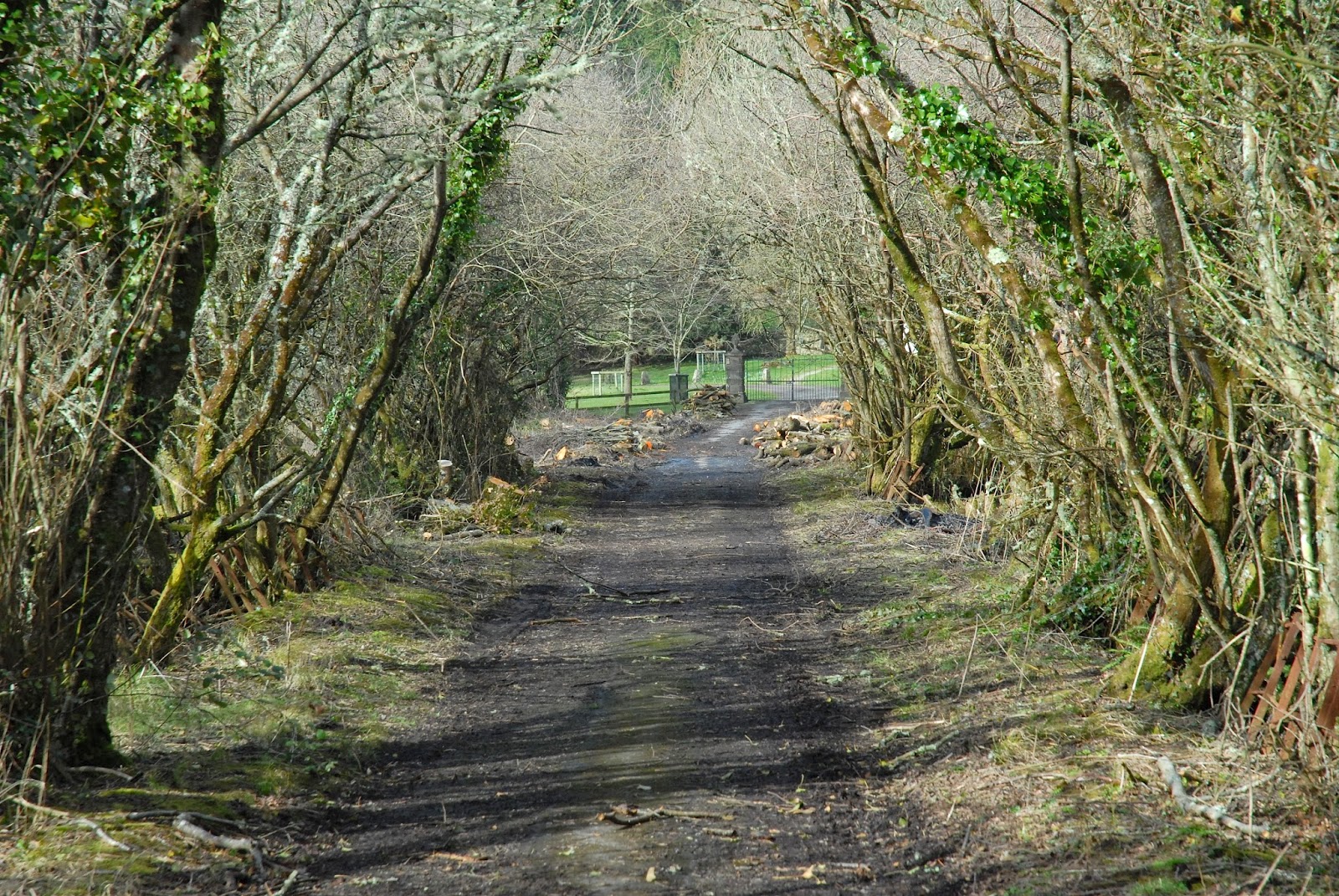 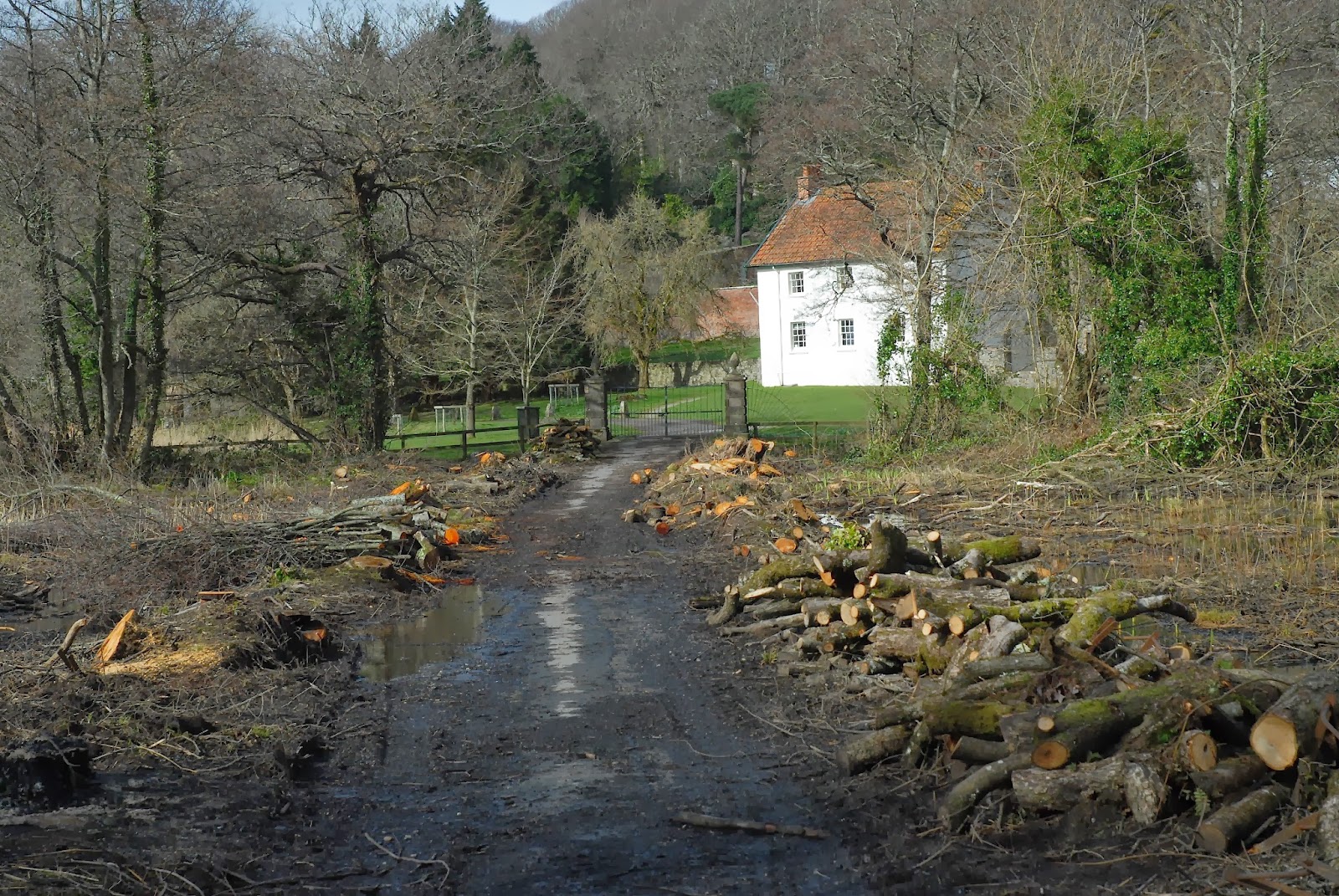