I spent some time watching a colony of Colletes Cunicularius at Whiteford 2 weeks ago.
I was curious to find out why some of the males 2 or 3 at a time, were digging at one particular place in the sand for maybe 5-10 minutes and then as if bored of doing so flew away to some other places. I took a twig and started to dig where these males had started a tiny hole. After reaching a couple of centimeters down, a fully grown and emerging bee would come out and all those observed (I dug 3 holes) were males. I concluded from these observations that the digging males had detected an emerging bee at first but then must have found out (via pheromones?) that it was a male not a female and had given up digging as a result.
I also observed some females being mated by the stronger of the fighting males. Some males would try to push the stronger males out of the way but failed. When the act was over, the male would fly away and the mated female was ignored by other males. Somehow, the female had become unreceptive.
I have attached a couple of pictures below. One shows several males waiting for a female to emerge, note the smaller male behind the bigger males on the bottom left of the picture.
Sylvie Herault 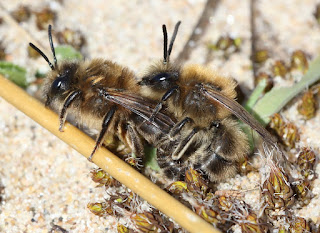 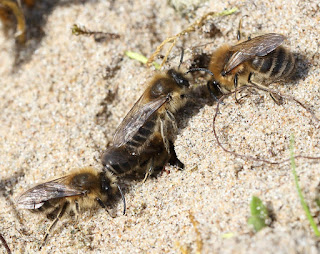