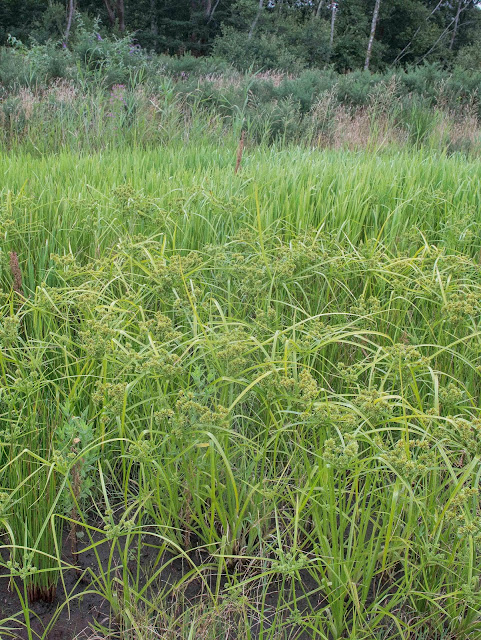 The new Amazon Road which connects with the recycling plant near Elba Crescent has some interesting man-made habitats which include a small pond, grasslands and disturbed ground. I have watched the development of the vegetation around the pond for the last few years. It dries up every summer and last summer the muddy floor had a large population of Red Goosefoot (Chenopodium rubrum). There was also a small patch of  Pale Galingale (Cyperus eragrostis), an attractive member of the sedge family that likes to grow in places that are flooded in winter and dry up in summer. This year there was no sign of the Red Goosefoot, but Pale Galingale is now dominating a large area of the pond. Pale Galingale is an alien in the British Flora, first recorded in the wild on Guernsey just over a hundred years ago. It is remarkable that this tropical, American species is now turning up in suitable habitats all over South Wales and is surely responding to climate change.
Several large populations of Yellow Bartsia (Parentucellia viscosa) occur in suitable places along Amazon Road. This is a designated Scarce Plant Species in the British Flora and a Biodiversity Action Plan species in Neath Port Talbot. It has been known from the Jersey Marine area for over 50 years but it has benefited greatly from the recent creation of open mosaic habitats. 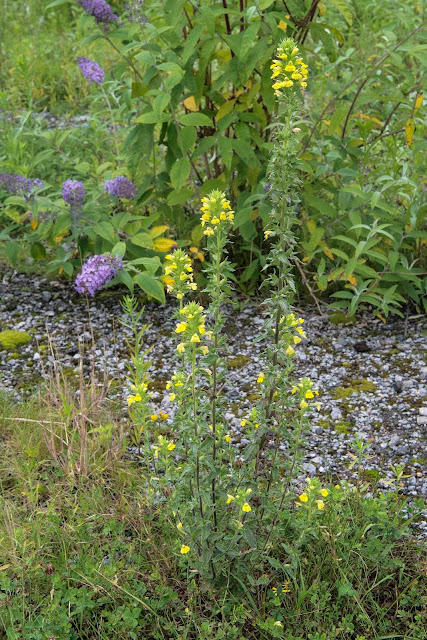 A few years ago Barry Stewart found some Oak-leaved Goosefoot (Chenopodium glaucum) in disturbed habitat around Swansea Docks. This very scarce achaeophyte has only been recorded a few times in Glamorgan (or anywhere else in Wales) and Barry's excellent record was the first for a long time. So I was glad to see it growing on some disturbed, weedy ground near the Amazon site with a number of other archaeophytes such as Black Nightshade (Solanum nigrum) and Fat Hen (Chenopodium album). Oak-leaved Goosefoot may not win any prizes in a beauty contest, but it has  a distinct appearance with its small, oak-like leaves which are mealy-grey underneath. It's good to know that these archaeophytes are still able to survive in disturbed ephemeral habitats in our area. 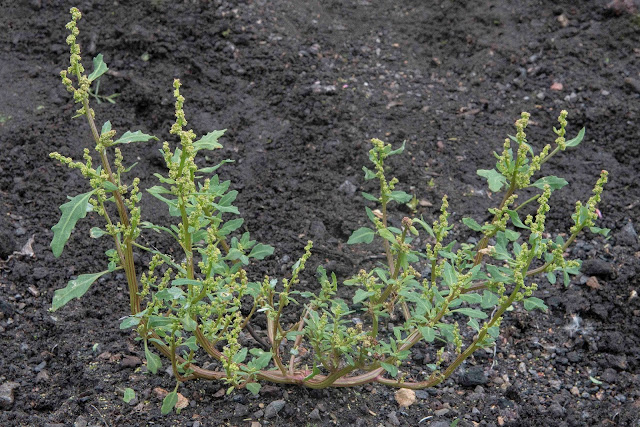 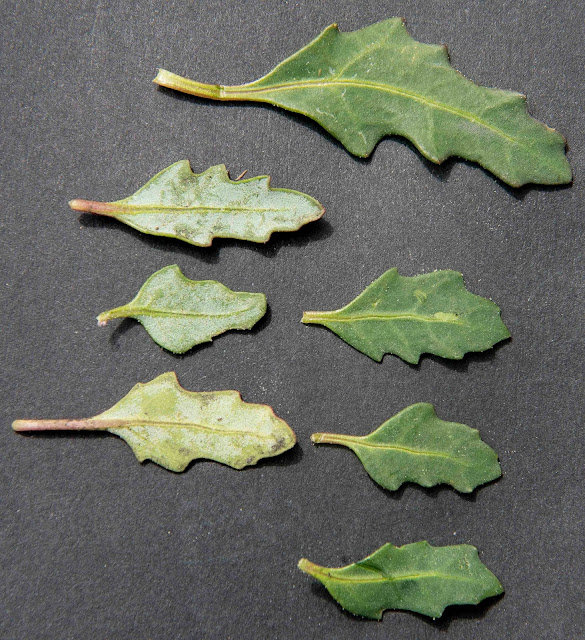 Before the Jersey Marine Amazon site was cleared for construction, there was a large area of birch/willow woodland which supported a rich community of fungi, thriving colonies of Common Wintergreen (Pyrola minor) and one of the largest populations of Yellow Bird's-nest (Monotropa hypopitys) that I have ever seen (hundreds of plants). A small colony of Common Wintergreen survives, but the rest has gone. The apparent loss of Yellow Bird's Nest ( a UK Biodiversity Action Plan Species) here is lamentable. Nature moves on!
Posted by Charles Hipkin at 16:19 2 comments:

Charles' recent discovery of Annual Beard-grass Polypogon monspeliensis near Crynant reminded me of my encounter with the superficially similar Hare's-tail Lagurus ovatus at Port Eynon back in 2007. The species was growing in abundance through one section of dunes with many thousands of plants, and although I've been back to the site in more recent times (casual visits rather than dedicated searches) I've failed to find it since. The Crynant Annual Beard-grass and the Port Eynon Hare's-tail are the only records we have of these attractive casuals in West Glamorgan. 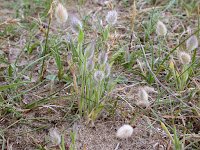 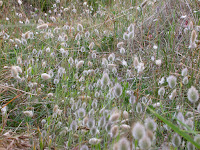 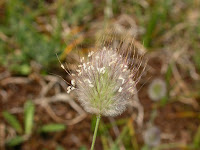 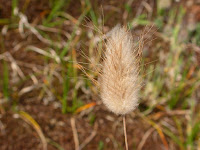 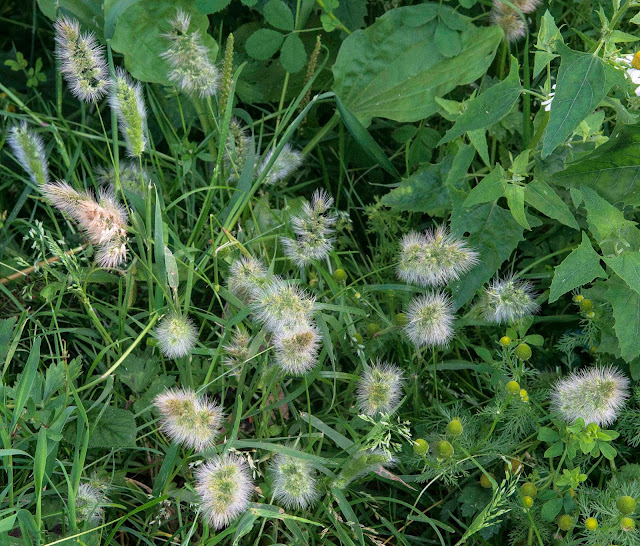 Recently I came across this attractive grass in a disturbed roadside verge near Crynant. Annual Beard-grass (Polypogon monspeliensis) is a south western European species which reaches its northern limit as a native species in south east England, where it grows on coastal grazing marshes. However, it also occurs sporadically as a casual alien species on disturbed (waste) ground and rubbish tips further west in Britain and as far north as Scotland. It is quite rare in Wales, but it has appeared in the docklands of Newport and Barry in the past. Outside its native range it probably originates as a bird seed alien or garden escape. It also occurs as an alien in North America where it is sometimes called Rabbit's-foot Grass and has pest status. The plants shown here were growing with a respectable cohort of weedy species such as Scented Mayweed (Matricaria recutita), Spear-leaved Orache (Atriplex prostrata), Lesser Swine-cress (Coronopus didymus), Shepherd's Purse (Capsella bursa-pastoris), Redshank (Persicaria maculosa), Hoary Mustard (Hirschfeldia incana) and others. Beard-grass is so named because of the long awns that are so conspicuous in its inflorescence, 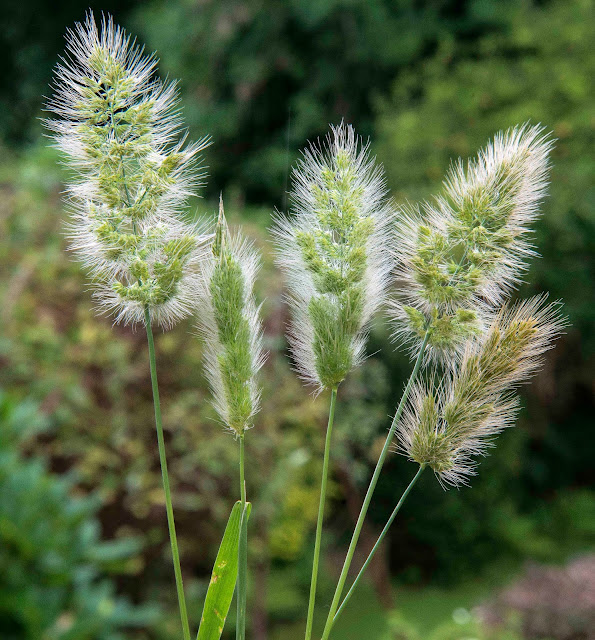