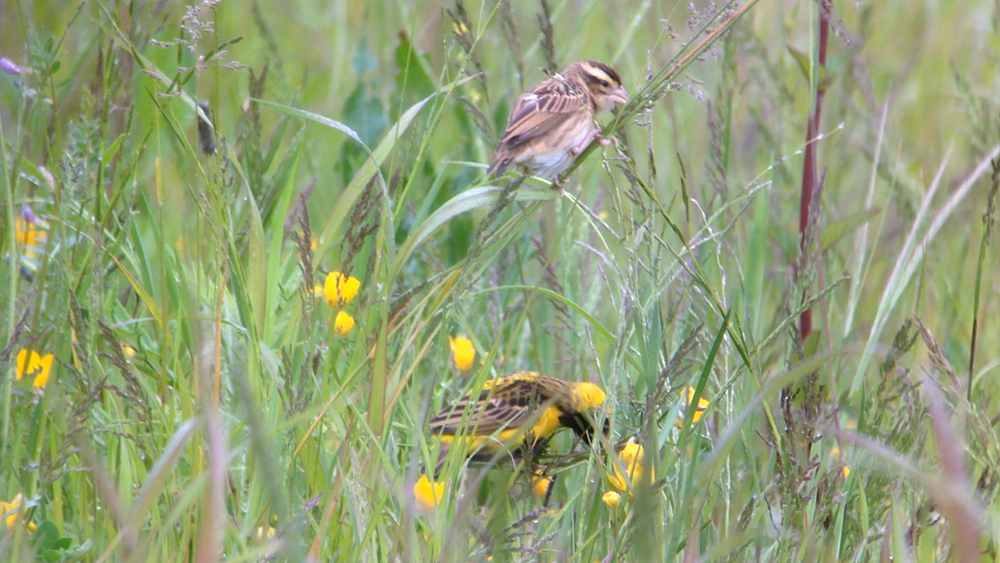 A pair of Yellow-crowned Weavers (also known as Bishops) Euplectes afer were seen by John Shepherd at Swansea Vale on the 25th. Today, on his walk to work, Alastair Flannagan saw them in much the same place where John had seen them and called to let me know. Whilst clearly escapes (rather than migrants from the feral Iberian population!), these African birds were particularly striking and seemed quite at home living free. To check them out for yourself, walk the new stretch of the cycle path at SS680988. Note, there are a couple of other sensitive species breeding at the site so please stay on the track. 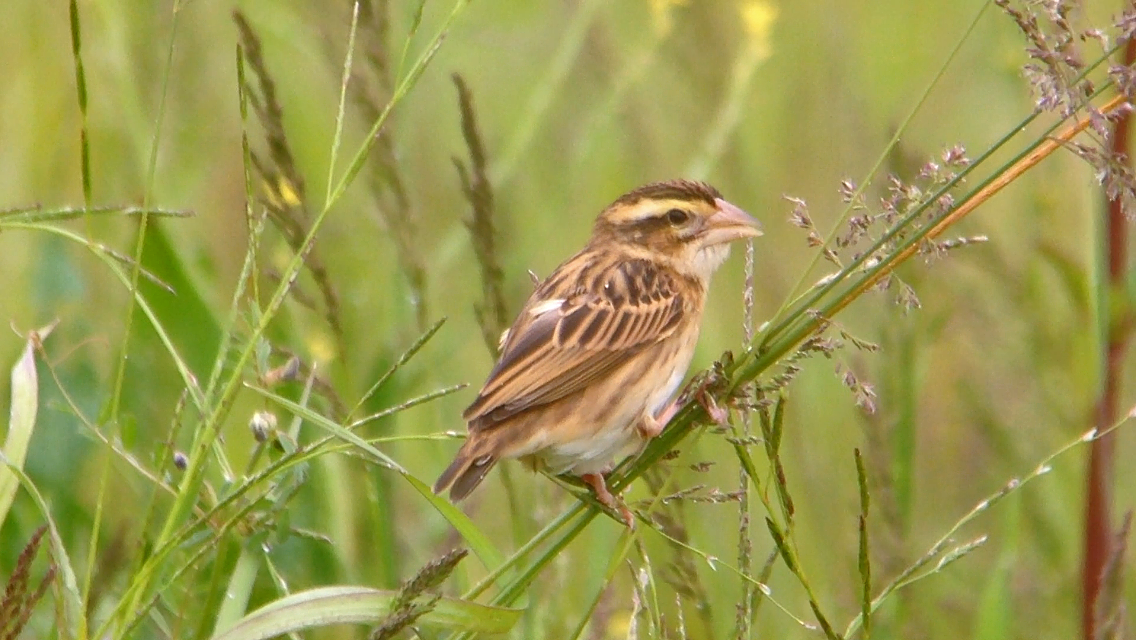 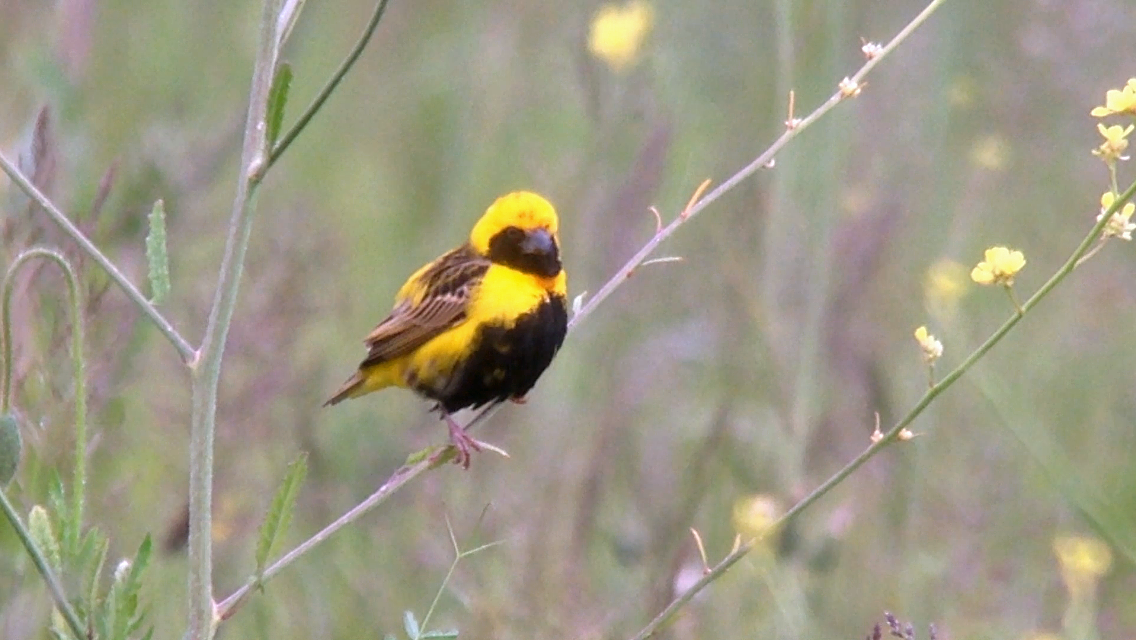 Posted by Barry Stewart at 12:45 No comments:

PWC is now in its second year and provides a great reference point for those who have a regular birding patch. For more information about the challenge you can read HERE. I promise if you take the plunge it will make you a keener and more appreciative observer, not just of the rarer species but equally so the commoner ones. What's more, there's very little effort required above whatever time you want to spend looking at your patch. 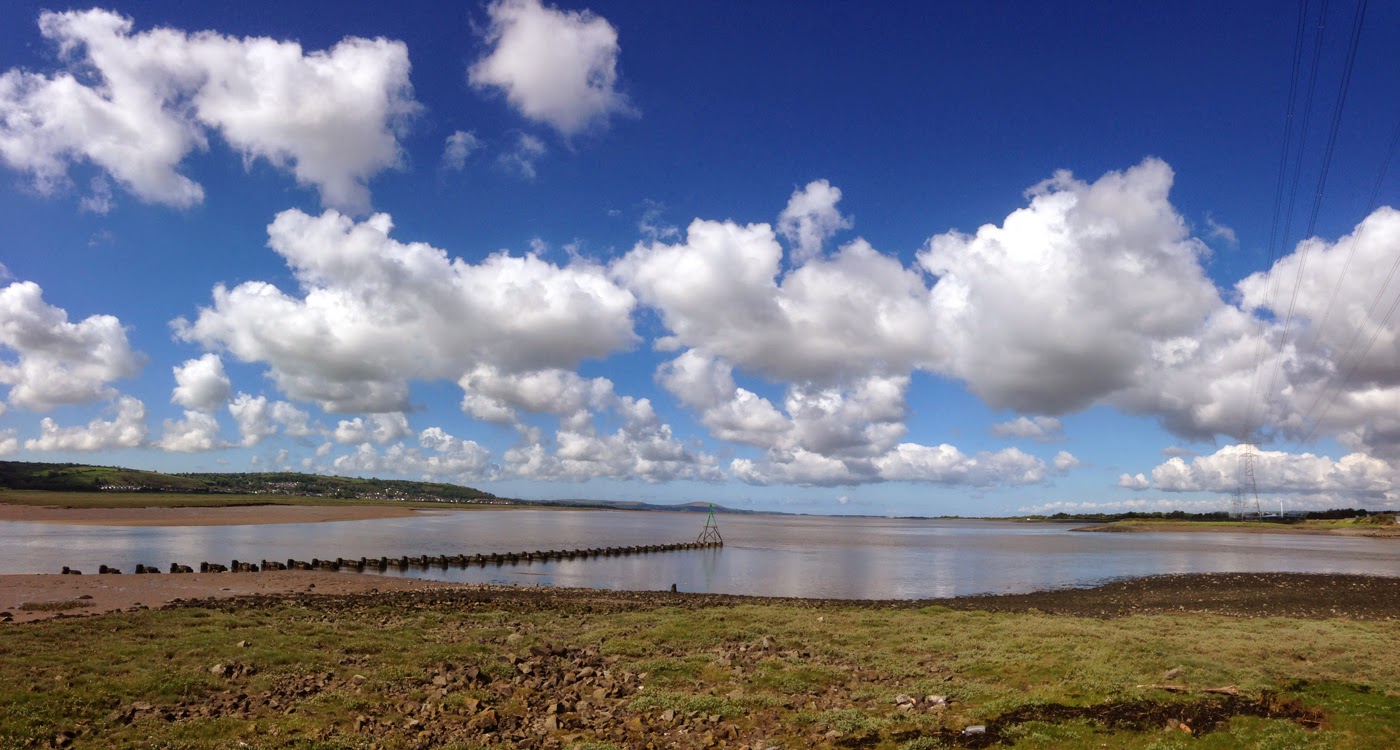 My patch is the south-eastern section of the Burry Inlet, although my main beat is the corner just south of Loughor Bridge (photo above) where I take the dog for a leg-stretch most days. Highlights over the last couple of weeks have included Avocet, Sanderling, Turnstone, Little Ringed Plover, Spoonbill and today my first ever Oystercatcher nest on the Burry, in the most unexpected location!

Mick Fordy wrote 'Joyce found these at the top of a plant while weeding. If you put your finger near them they catch hold as they would with a bee.'
If you're as sharp-eyed as Joyce and are lucky enough to spot these tiny triungulin larvae, identification is actually easier than the adult beetles, these being the larvae of the Black Oil Beetle Meloe proscarabaeus. See an excellent identification article HERE.
Posted by Barry Stewart at 11:43 No comments:

This evening Gordon Howe took an excellent series of photographs providing clear proof that Great Black-backed Gulls are breeding on the south Gower cliffs. I've only trawled back to the 2000 GOS report and can't find any reference to this species breeding in West Glamorgan other than a pair seen in suitable habitat in 2004. Until I find time to trawl through the rest of the annual reports, I'm not sure if this is a new breeding species for West Glamorgan, so will be interested to hear if anyone knows of this species breeding elsewhere. I guess it's possible there has been the odd roof nesting pair? Well done Gordon on what is a very significant discovery!

Posted by Barry Stewart at 22:29 No comments:

At 11:10 today Darren Coombs and I sat down to do a bit of sea watching from Kenfig Dunes, our position was 500m south of the Kenfig Rivermouth. The visibility was good and with flat calm conditions it wasn't very long before a splash and very long dorsal fin caught our attention. Even though neither of us had seen this species before it seemed obvious that the fin must belong to a Risso's Dolphin. A couple of breaches later and a good side on view of the nearest animal, showed the very characteristic front-end profile.
Darren was able to take a very nice photo showing the distinctive dorsal fin profile. At this point the nearest Risso's was about 1.5km from our position and approx 1km offshore. After we first saw them they initially started drifting towards Sker Point, but later changed direction choosing a heading towards Swansea Bay. 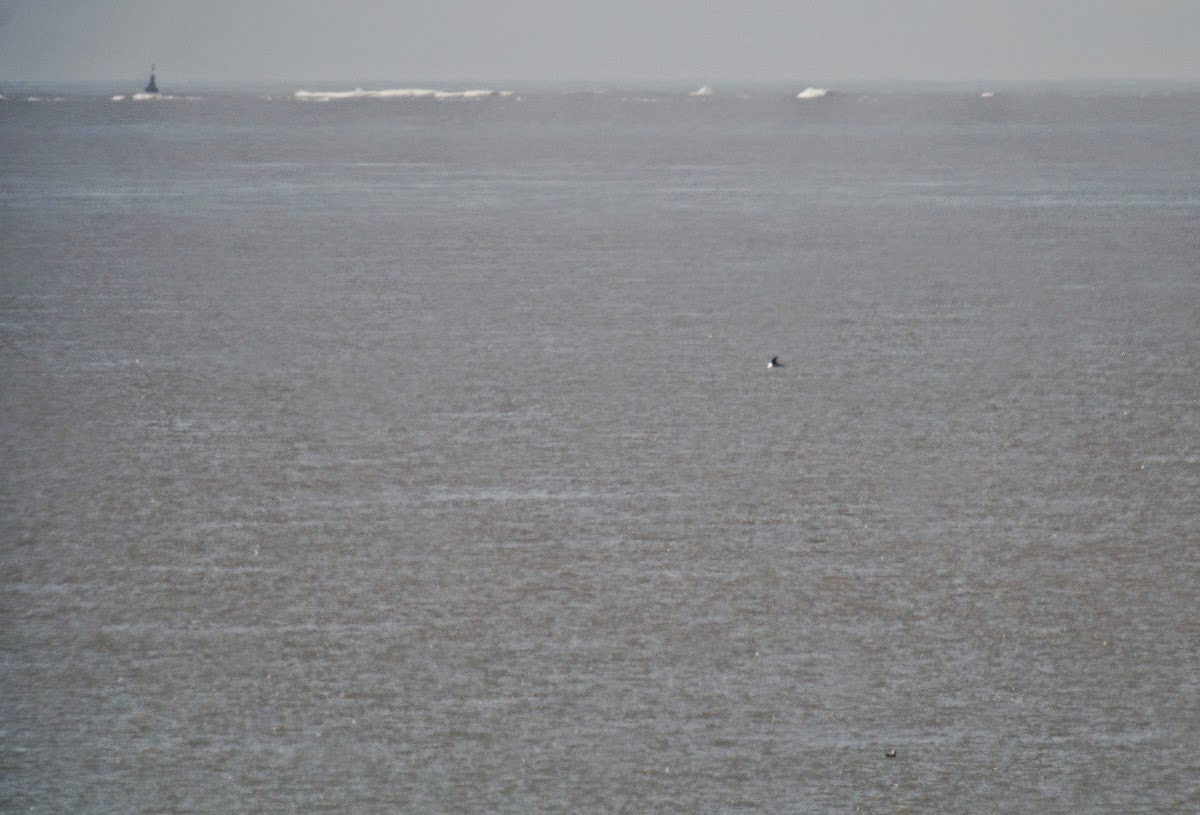 In the above photo the Risso's is >2km offshore with breaking waves that must belong to a shallow sand bar or reef in the background. These waves can easily be seen from the coast during flat calm conditions, I imagine this offshore feature has a name? Sadly I don't know whether it does but would be keen to find out. 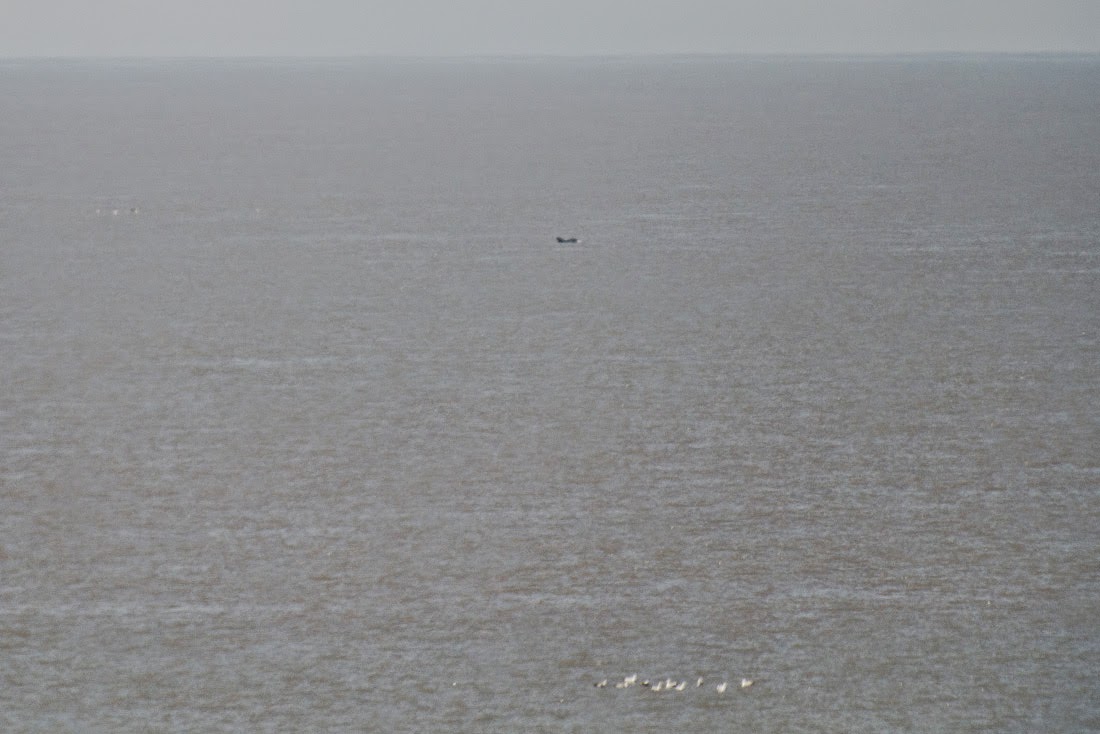 The lower photo shows one of the Risso's Dolphins heading back towards Swansea Bay and clearly inside NPT territorial waters! The animal is approximately 3-4km offshore at this point and the photo also shows a group of Herring Gulls in the foreground and another smaller group of gulls a little further back from the dolphin, to the left, which adds some scale.
There were at least 2 individuals that were seen breaching in the same field of view on a couple of occasions. Indeed, there may well have been as many as four Risso's Dolphins present when it seemed that Darren and I had very distant views of 2 breaching Risso's Dolphins in different parts of the bay. However, it was difficult to be certain of this. The behaviour of the dolphins initially suggested (to me) that they were foraging, but when they were distant their behaviour showed far more social interaction. A full breach was noticed once with some only marginally less impressive splashy breaches seen more frequently. There was also some repeated body-slapping by one individual that can be best described as multiple belly-flops.
I've seen some decent stuff over the last few years locally but seeing Risso's Dolphins in this area is something I would never have dreamed of. It was just incredible.
Posted by Mark Hipkin at 01:06 4 comments: 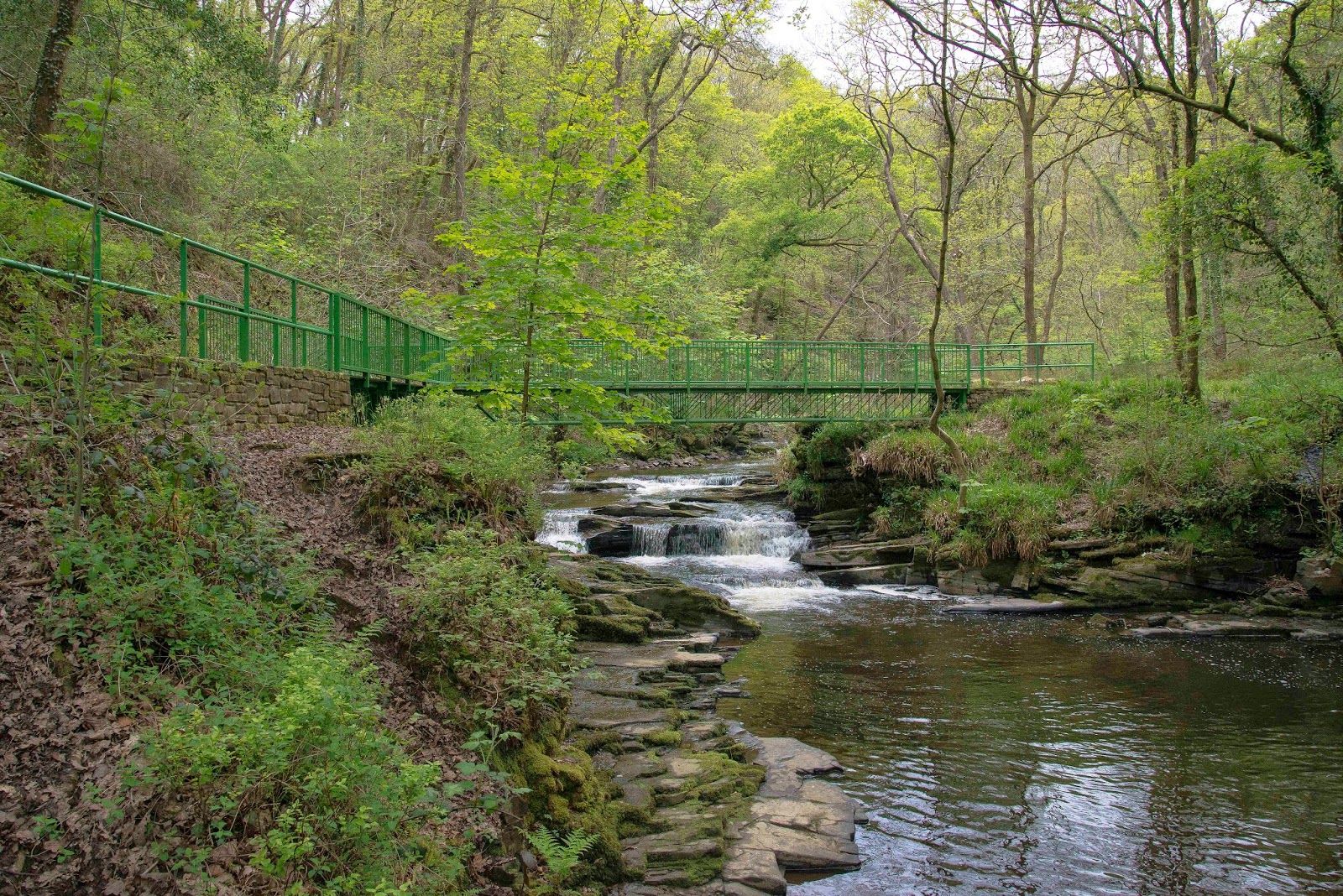 Nine of us and Sam the dog braved the elements this afternoon for a walk, arranged by Elen Richards (Woodland Trust), in Cwm Du Glen (Pontardawe). This valley, which is accessed from Pontardawe Cross, is beautiful at any time of year, but at the moment it is simply stunning. The Upper Clydach River was a torrent of water today, where dippers were busy feeding their fledglings and grey wagtails were foraging on rocky, riverside slabs. The river corridor with its typical riparian woodland has lots of native Wych Elm (Ulmus glabra), banks stuffed full of mosses and liverworts and a colourful flora including Bluebell, Wood Anemone, Sanicle, Yellow Archangel, Wood Sorrel and Wood Melick. Ferns are abundant everywhere. 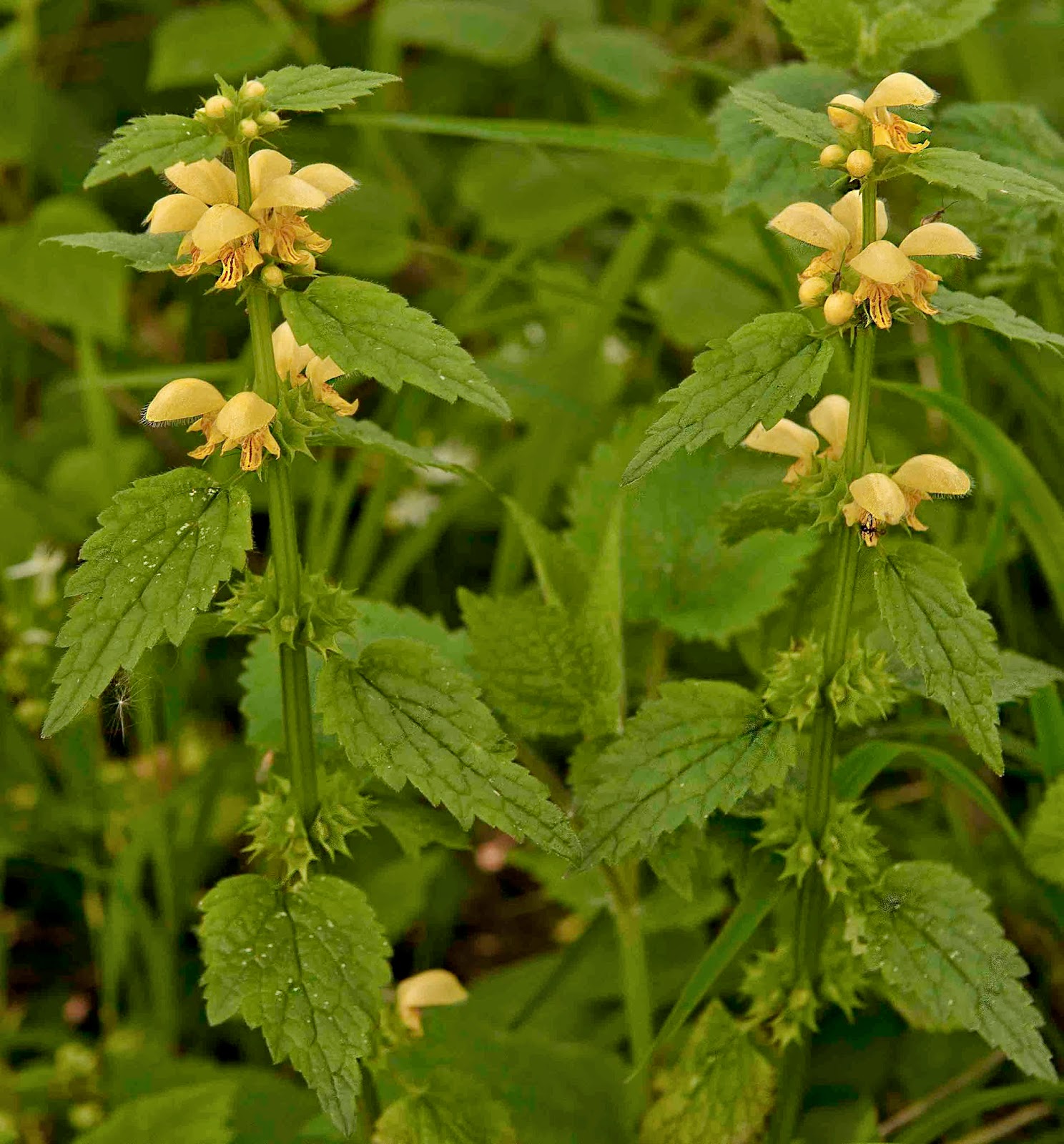 The steep sides of the valley support woodland that used to be full of Rhododendron. However, the Woodland Trust has recently done an excellent job of removing this invasive alien here, restoring a more natural Sessile Oak woodland ecology. We were rewarded with singing Wood Warbler and a Spotted Flycatcher which was foraging in characteristic fashion from the side of the river. 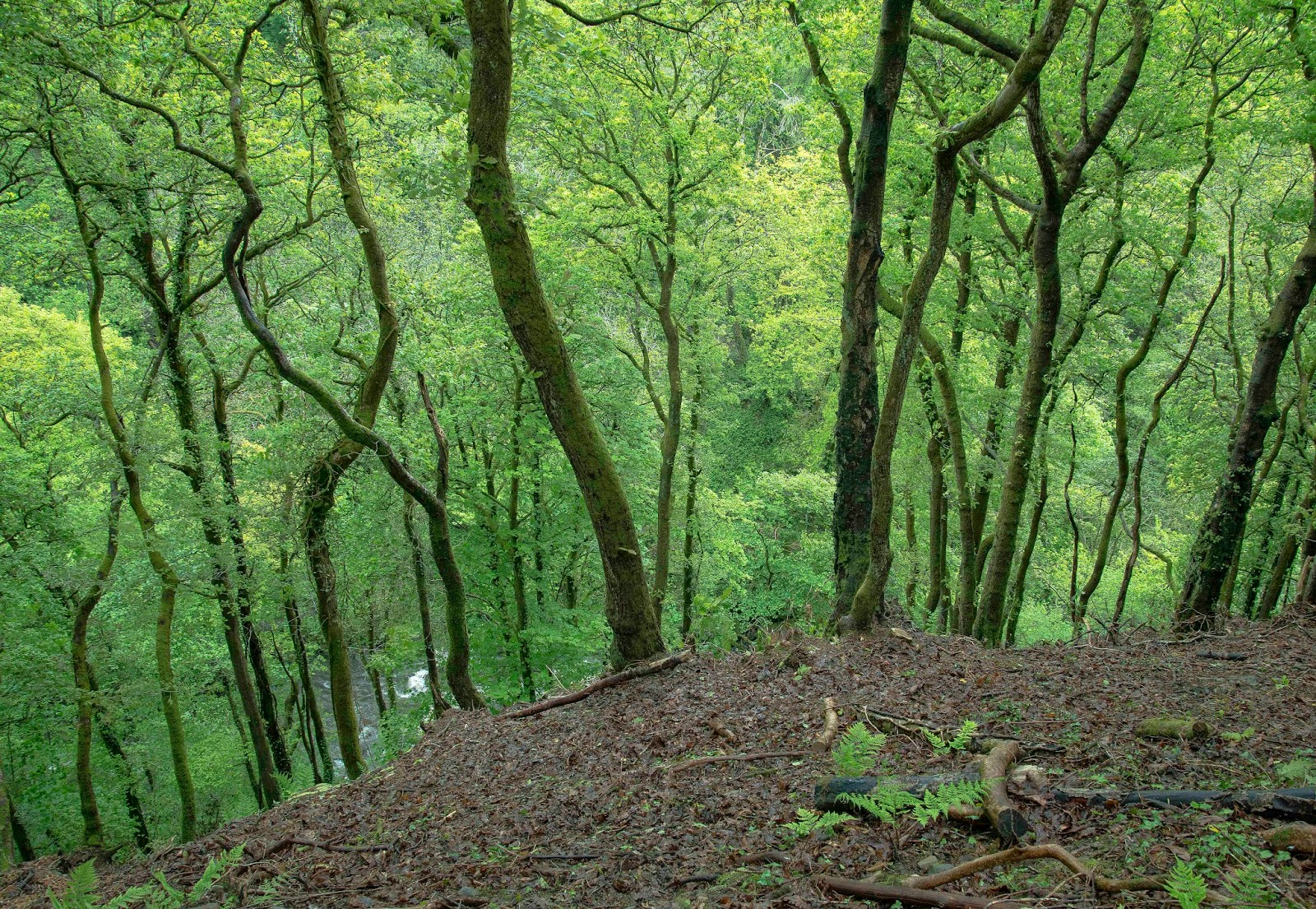 This was the first of a number of Cwm Du Glen events that the Woodland Trust have arranged for this year. Most of these are family orientated.
Posted by Charles Hipkin at 21:04 No comments:

Last week I stumbled upon a good population of an unfamiliar Lepidium at Sker Farm, which I suspected was either Smith's Pepperwort Lepidium heterophyllum or Field Pepperwort Lepidium campestre. Both are scarce plants locally and their initial identification was not as simple as the key made it appear. A key character of Field Pepperwort are the vesicles on the seed capsules, these appearing as shiny bumps on the valves as shown below.
As I coincidentally had plants of Smith's Pepperwort just coming into flower, grown from seed collected at Overton Mere last year from the last remaining two plants there, I was able to directly compare the flowers of the two species (too early for seed of Smith's Pepperwort). As can be seen in the image below, the most noticeable features of the inflorescence are the larger and more open petals of Smith's which also shows reddish undehisced anthers.
Thanks to Tim Rich & Arthur Chater for confirming the identification.