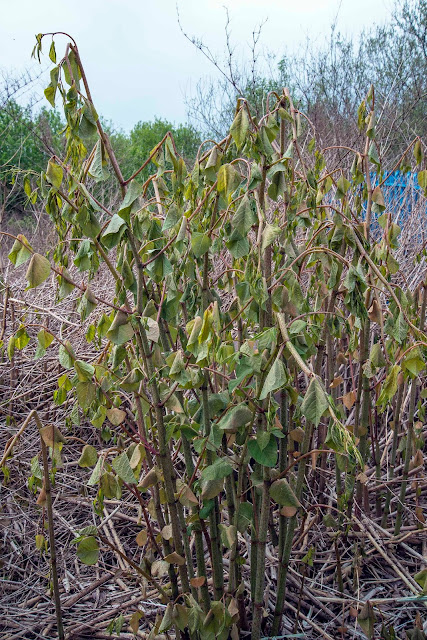 I brought this to the attention of a few people a few days ago and several people have told me that they have noticed this elsewhere in South Wales. In a walk along along the Neath Canal between Neath and Briton Ferry, almost every plant I looked at was showing severe wilt symptoms (as shown in the photo below). It almost looks as if there has been a mass herbicide spraying event! 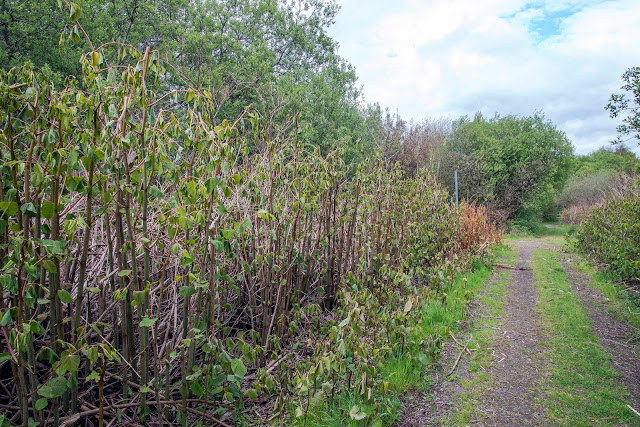 I haven't noticed Japanese Knotweed wilting on such a wide scale before and it is interesting to speculate on what is going on here. The rapid onset and scale of this phenomenon suggests that it is not the result of disease or herbivore attack. Rather, it appears to be  the result of a  physiological shock. But it doesn't appear to be a result of water shortage as such, which might seem to be the most obvious cause given the dry weather we've experienced recently - many plants that are growing in moist soil all along the canal are wilting. One possibility is that the mild conditions of early Spring this year have stimulated an early, rapid growth of tender knotweed stems which have subsequently experienced catastrophic chilling shock injury during the recent, unseasonal cold conditions. It's what happens to your tender half hardy seedlings when you plant them out too early.
I haven't seen this reported elsewhere, nor am I aware of any information on it in the literature, but I suspect it has occurred on a wide scale throughout the UK. Comments welcome.
Posted by Charles Hipkin at 23:41 19 comments:

Earlier in the week, a little bit of beetle hunting in a damp mossy patch on colliery spoil at Melin Mynach (Gorseinon) SS593993, added a few more records to this threatened site.

Pterostichus strenuus - Agonum muelleri
All are common species, but add to an ever-growing list of taxa recorded at this diverse site.
Posted by Barry Stewart at 09:21 4 comments:

Since being formally described and named in 2008 by Ben Rowson at NMGW, Cardiff, records of the the Ghost Slug Selenochlamys ysbryda show the species to be well established in gardens across much of South-east Wales. It is likely to be expanding its range so it's one to look out for. This individual was photographed by Mick Fordy in his Llanmadoc garden, an extension to the distribution shown on the NBN. 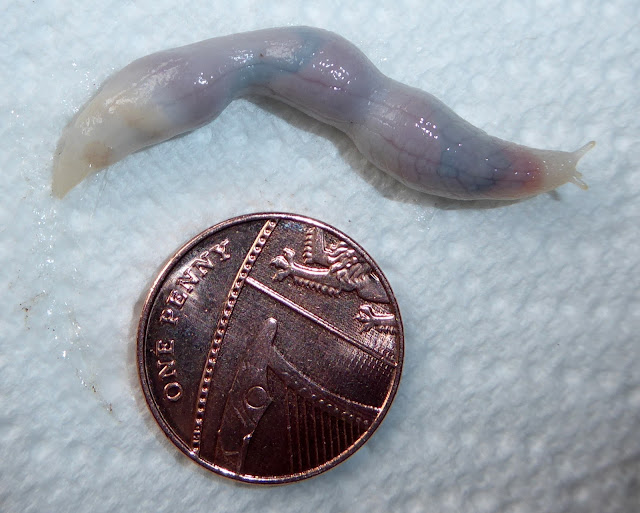 The annual trip to see the wonderful Bluebell display at Graig Fawr, Margam (SS799864), last weekend produced a few miscellaneous records of interest: The avian highlight was a Wood Warbler in full song and beetle interest was provided by a couple of Black Oil Beetles Meloe proscarabaeus (below left) on the path above the wood plus, under a log in the wood, a cluster of the rather smart looking, but tongue-twisting Abax parallelepipedus - go on have a go! 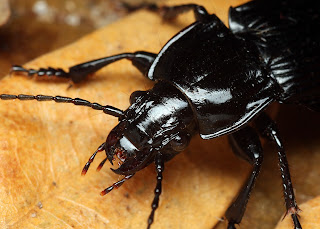 Posted by Barry Stewart at 08:09 No comments:

out and about with the bees and wasps, at last

Nice to get out a little this weekend, after a winter of indoor work on the bees and wasps. Lots of the usual early spring suspects are about e.g Bombylius discolor, Cicindela campestris and a few hoverflies.

Yesterday I cycled to Mumbles and hung about a Willow tree, camera in hand, took photos and tried to identify. Much to my surprise I did actually manage to identify some of them but it sure isn't easy, even after 5 years of intensive work. Because it's still so early in the year the vast majority of solitary bees seen are males, identified by the fact that they have 13 antennal segments compared to the female's 12. You can see them all in the better picture of Trimmer's Mining Bee below.

Firstly I found The Yellow Legged Mining Bee (Andrena flavipes), an old favourite as you can pretty much identify them in the field by the stripes of hairs on the abdomen and yellow haired back legs of the female. This one is a male and, as you can see below, is widely distributed on the Gower with 2 generations a year (bar chart) and nests in soft cliffs and other bare places, often in large numbers. 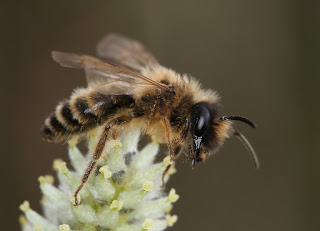 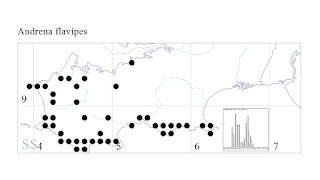 Secondly I found a male Cliff Mining Bee (Andrena thoracica), also widespread in much smaller numbers twice a year, and nesting in similar bare places to the bee above. It can easily be identified by the ginger thorax and black, very shiny abdomen in both the male and female. If you can see any white hairs it is not this species. 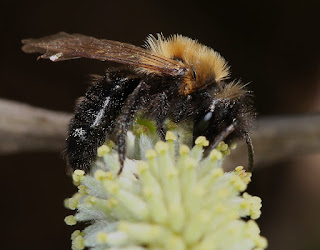 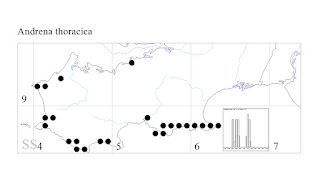 The third species I could identify is less widespread but also flies twice a year with a different appearance between spring and summer broods, a while ago treated as 2 different species. This is Trimmer's Mining Bee (Andrena trimmerana), identified in these photos by the red brown marks in the first 2 abdominal segments (red arrow) , the spine from the Gena below the eye (blue arrow) both best seen in the fuzzier photo, and the third antennal segment being half the length of the fourth, best seen in the clearer photo. In the summer generation of males the genal spine is absent, just to make life difficult. 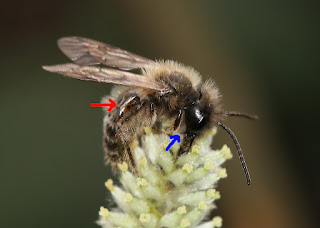 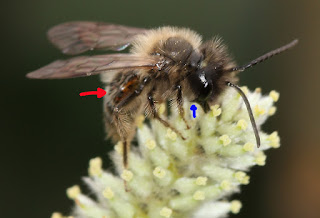 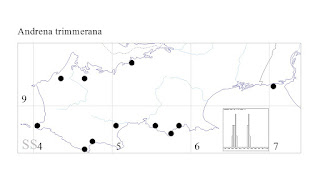 Since 2012 I have been trying to record as many species of bee and wasp as I can on the Gower. I have not bothered much with Bumble Bees, nor Social Wasps and not at all with ants. I have recorded more than 200 species and if you want to look at all the maps they are here on my flickr website:

A few maps are missing as the species are very difficult to sort out but hopefully I can add a few more maps very soon. There is much to be learned including, every time I think I've found something new I discover this is not the case, mostly. Keeps the excitement levels up! A few days after starting in 2012 I seem to have caught something new for Wales, Nomada guttulata, but it took me 5 years to get up the confidence to think it is correct. Confirmation of this will have to wait until The Bees Wasps and Ants recording scheme have trawled through my records unless someone knows better now! Numbers of insects shoot up and down alarmingly and distributions change a lot so contributions are always valuable and it takes a long time to get to know a site fully.
Posted by ian tew at 18:01 3 comments: