For some video footage of the 3 Avocets at Penclacwydd taken yesterday follow the link below.

I finally got round to doing my chat survey today. My square is over half forestry and the remainder is made up of habitat lacking in any scrub, but there are some drystone walls and as expected a few Northern Wheatears were present including a confirmed nest. In its present state my square seems unlikely to be suitable for either European Stonechat or Whinchat but that could change in years to come? Frustratingly the square I've been allocated is adjacent to one of the better European Stonechat habitats in the Neath area. However, when the conifers in my square have been felled and replanted it may produce a temporary suitable habitat for European Stonechats which could be interesting from the surveying point of view.
Bird of the day went to the female Common Redstart found on the way to the square and the garden has recently noticed a rise in Eurasian Siskin numbers with more than 10 today. Mostly adults noted but a fairly advanced juvenile bird turned up on the 20/4/12. 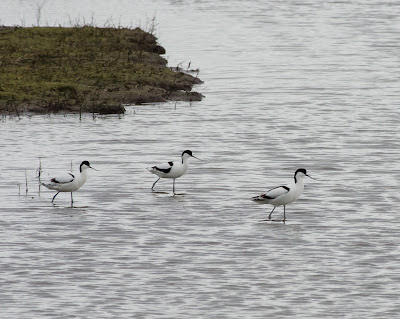 It's almost embarrassing for me to say that these were my first sighting of Avocet in Wales. Absolutely stunning birds!
Posted by Mark Hipkin at 19:31 No comments:

Three Avocets appeared on the saline lagoon today, leading to speculation that they may stay and breed. Other birds of note seen included Short-eared Owl, Pink-footed Goose, Brent Goose, 14 Whimbrel and 6 Greenland Wheatears.

Posted by Barry Stewart at 17:41 No comments:

During the last week a few Grey Bush Cricket (Platycleis albopunctata) nymphs have hatched from a sample of Canary Thread-moss (Bryum canariense) that I collected from Horton and have kept in a living state on the kitchen window sill. The female cricket has a strong ovipositer, used to insert the eggs into soil and clearly a number of eggs were laid below this plant. 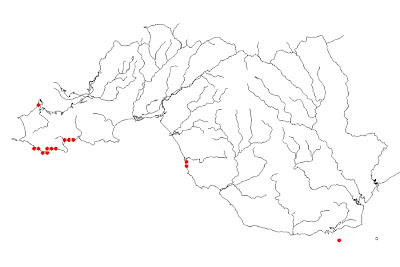 The Grey Bush-cricket is an uncommon species that is highly localised, being confined to a few favourable coastal sites (as shown), although can be very abundant where is occurs, such as at Nicholaston Burrows. At cliff sites, like Horton, Grey Bush Crickets tend to be more difficult to find.
Posted by Barry Stewart at 15:11 No comments:

At Port Talbot, it was interesting to see that a Ringed Plover was sitting on eggs in exactly the same spot, where last year, there was a Little Ringed Plover with her chicks. Also pleasing to see a few pairs of Lapwings on eggs around and about. Let's hope the weather improves by the time the chicks hatch - I think 12.C is the critical temperature for chicks to forage without the need for regular brooding? 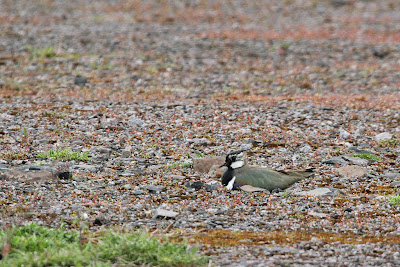 Posted by Barry Stewart at 14:42 No comments:

Sam Bosanquet recently discovered a healthy population of one of Wales' rarest mosses, Baltic Bryum (Bryum marratii), at Whiteford NNR. Listed as Vulnerable in the UK Red Data List, it is extinct in England, was formerly known from just two sites in Wales (now four since Sam has also found it in Carmarthenshire), and there are scattered populations in Scotland and Ireland. Without GPS it would have been difficult to relocate this diminutive moss in the tightly grazed sward of the seepage line that runs along the upper saltmarsh transition at the Groose (SS444945).
Associates of the Bryum included...

Posted by Barry Stewart at 14:54 No comments:

Clearly the local Herring Gulls and Lesser Black-backed Gulls having been getting it together in Llanelli in recent years, resulting in the odd hybrid. I was at Sandy Water Park yesterday with Mark Hipkin when we noticed this individual, loosely paired with a Herring Gull. The most distinctive feature, not apparent in these photos was that the grey was a couple of shades darker than its companion, plus it had pinky-yellow legs and a intensely red orbital-ring. On the water, especially in a mixed flock, such hybrids could easily pass as Yellow-legged Gull, although the wing tip pattern is not right for this species nor is it structurally as robust. 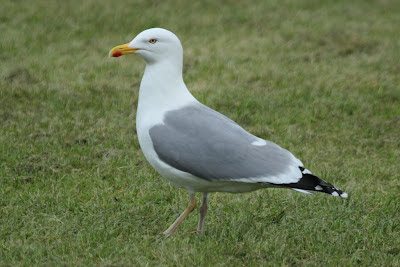 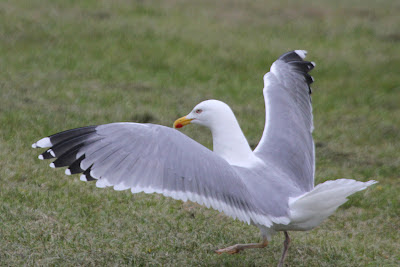 Photographed at Sedgers Bank by Owain Gabb last week. Unusually for a flat fish, this species favours rocky coasts where it is well adapted to clinging onto rocks with its broad fringing fins.
Posted by Barry Stewart at 15:55 2 comments: Wood-sorrel (Oxalis acetosella) is usually white-flowered although the text books tell us that it occasionally comes in a pink or mauve form, as shown here. This plant was found at the edge of a Western Hemlock plantation near the Clydach Brook (Resolven). Although there were a few white-flowered plants present, most of the plants in the population were pink.
All the other populations I've seen in the Neath Valley have been white, exclusively.
Posted by Charles Hipkin at 19:22 2 comments: 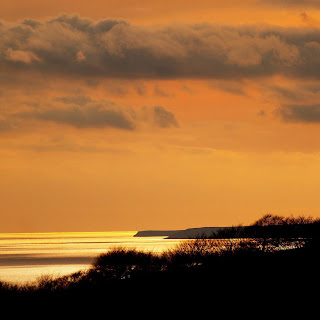 Oxwich point, as seen from
Mynydd baeden, Llangynwyd.
Posted by Paul Parsons at 11:47 No comments: 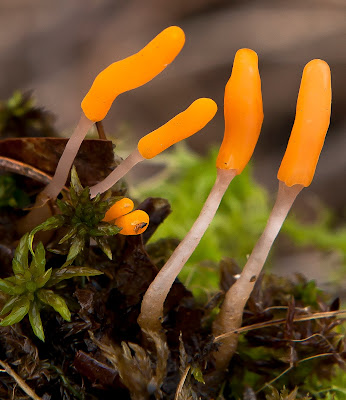 Although it's an uncommon fungus on a national scale, Bog Beacon (Mitrula paludosa) can often be found in our area if you look for it in the right places. It appears in the spring in really boggy ditches. This group was in a wet ditch at the side of a forestry road near Rheola. It often grows with Sphagnum moss. The bright yellow head held on a white stalk is hard to miss. Individuals are about 4 to 5cm tall.
Posted by Charles Hipkin at 22:33 No comments: 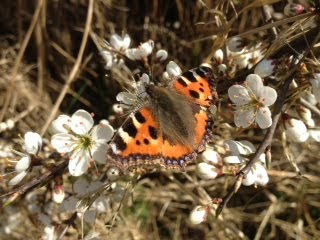 Seen on my sunday morning run by Machynys golf club, a Small Tortoiseshell enjoying the blackthorn nectar.
Posted by Chris Manley at 19:13 No comments: