In my post about Andrena rosae of 18th April I mentioned another confusion species, Andrena labiata, which might not occur on Gower.................... There are several squares with records on NBN gateway. Next day I found one and also remember putting one on here many years ago as a Sphecodes and being corrected by some kind person. I have never looked again at the picture of this bee, from Parkmill, to check. I found this species at Bovehill reserve on north-west Gower and because it was a male it had a white face as you can see: 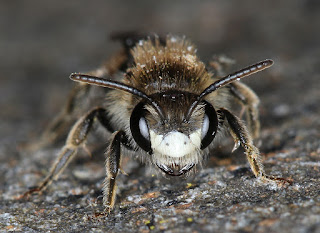 It is about half the size of rosae and has a different colour and pattern of red: 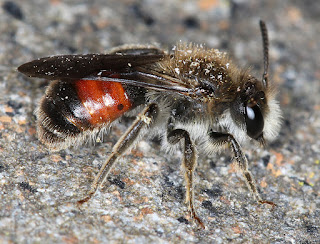 The face of rosae looks like this, without white and with much longer mandibles: 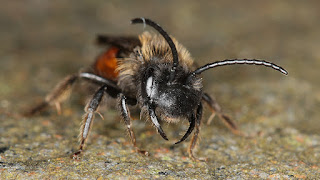 Can't do much in this arctic cold so here's hoping it warms up again next week when I will continue. At least I can catch up with some jobs including this posting.

On an outing to Oxwich in January I found a strange-looking piece of seaweed that went on to baffle all my phycologically-inclined friends. It somewhat resembled Mastocarpus stellatus but the perfect spheres on stalks did not match the more irregularly shaped and unstalked structures of M. stellatus. It has now been identified as Calliblepharis ciliata / Eyelash weed thanks to Kate Lock and Francis Bunker. Fantastic little weed! 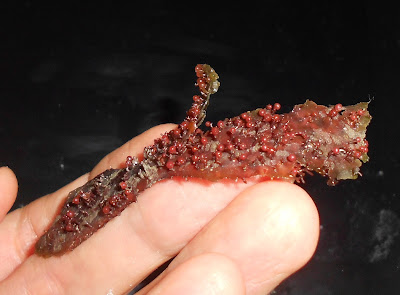 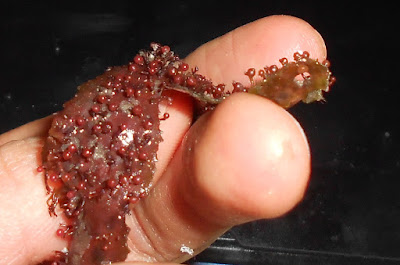 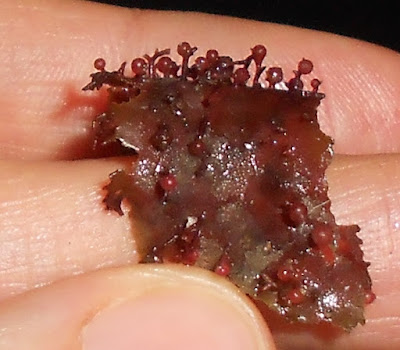 Andrena rosae, worth keeping an eye out for

Bees, obviously the things of the moment, like number 18 buses, none for ages and then three posts come at once. Isabella, I loved your article in the Bay magazine (all of them actually!), well worth spreading as widely as possible. Anyway with a risk of being boring, please read on.....
Andrena rosae male: 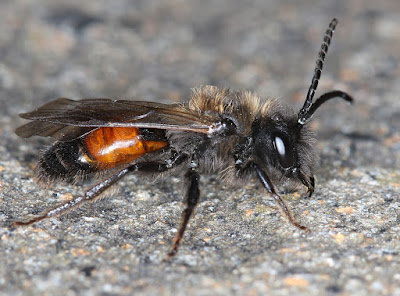 Continuing with the distinctive, relatively easy to ID bee theme, when I found one of these last year on Pwll Du head at Blackthorn I was quite excited. Steven Falk's book says very rare but there was a dot for it in Gower on NBN gateway if I remember correctly. It's hard to see but there are dots for north Devon and west Wales in Falk's book so it was one of my little jobs this year to look. Last week I saw it at Mumbles by the big apple at Alexanders, at Pennard (this picture) at Willow blossom and above Deep Slade at Blackthorn. No sign between Three Cliffs and Oxwich but the wind had turned much colder by saturday. It is easy to identify if you don't mix it up with a Sphecodes: 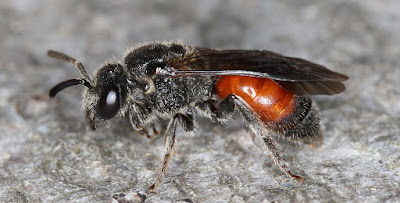 Look at the long hair and jaws, of this male rosae, and the spur coming off the cheek at the base of the jaw (double click on the upper image to  make it fill the screen). The female will not have these long jaws. The other red marked Andrena is labiata ( male has a white marked face) and I'm not sure that occurs here.......... There is another bee with markings where the reddish is on this one but it is brown there instead of rose and this is Andrena trimmerana and I have found this in the same places.

I'd be delighted to hear from anyone who thinks they've found it, especially if they have a nice photo. There is a second generation later in the year but there might be some other rare species to confuse it with, always game to give it a go ..................
Posted by ian tew at 17:16 1 comment:

A cloudy day has given me a chance to catch up on myself a little after a lot of bee finding activity in last week's good weather. Although easter was early this year it does strike me as a lateish spring, although that may be anticipation on my part. Things are under way in east Gower as far as Oxwich but a visit to Overton yesterday showed me the west is still blasted from the winter, at least on the coastal strip. It was late enough to find my first Lesser whitethroat of the year diddling away at the top of Longhole Valley: 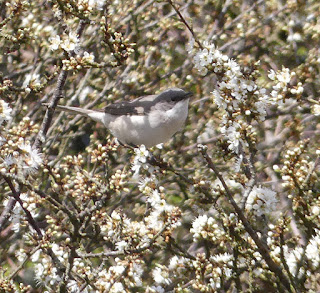 The main purpose of this post is to illustrate some of the bees which can be seen and identified in the field or from good photos. The first of these would be found in large numbers on the soft cliffs on the coast but also inland where suitable. Andrena flavipes (Yellow Legged Mining Bee) has brownish bands on the abdominal segments and a bright orange hind tibia in the females. Males swarm at the soft cliff and its slumped bottom part and emerge first (like many bee species). The females, not yet as common, collect pollen which can sometimes obscure the leg colour, as in this photo. Like many solitary bee species they also have a late summer generation.
Male 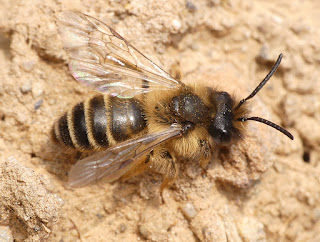 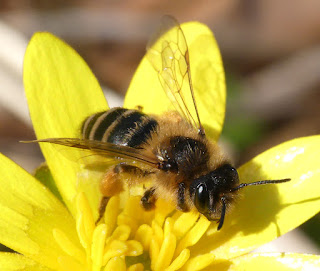 Another Andrena common in this habitat and on bare mud elsewhere is Andrena thoracica (Cliff Mining Bee) and, as you can see has a bare shiny black abdomen and bright orange thorax. It is also much larger than the Yellow Legged. Beware later in the season as there is a similar bee which has some white/pale hairs on the legs and abdomen. You are pretty clear at this time of year. 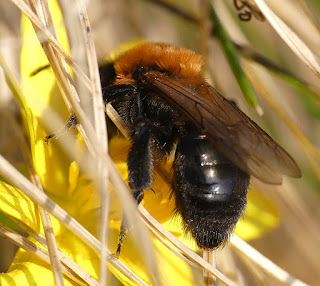 A third really easy bee is Andrena fulva (Tawny Mining Bee) which will be found everywhere with grassland/bare areas in which they nest, look for the excavation volcanoes on your lawn. Beware Lasioglossum calceatum will also do this a little later in the year.. It is also very common in gardens and will visit your fruit bushes. The males are not so easy to identify but the female is orange all over and easy to ID as long as you don't mix it up with some of the, much larger, bumble bees with a brown thorax. 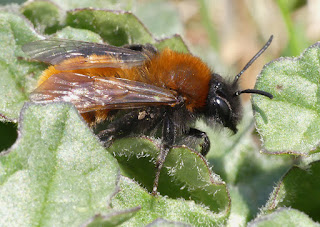 This fourth bee, Andrena cineraria (Ashy Mining Bee), does not strike me as so common here but the reason I am looking is that I do not know for sure. I have found it a few times last week at Pennard, Caswell and last year at Rotherslade. 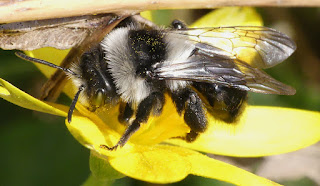 One thing you might confuse with this is a worn or dark Melecta albifrons (Common Mourning Bee) which is a cleptoparasite of Anthophora bees and lays the egg in their nest whereupon the young hatch and eat all their food. If in doubt, as appearances of bees can vary quite a bit especially when old and worn, look at the wing veins shown in the photo below which can be seen in a good photo from the right angle.
Melecta 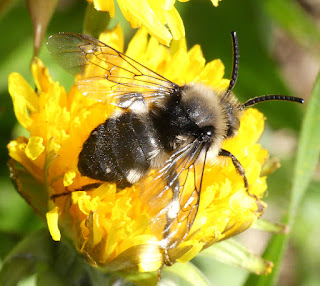 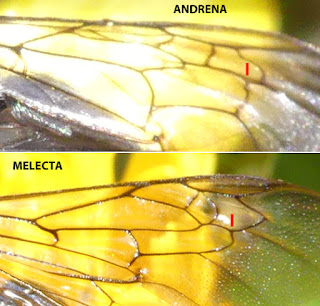 If you are being guided by Steven Falk's excellent new bee book beware that the genera key says the vein indicated by the red line above goes to such and such a position on the second submarginal cell when it should be the third. Not rocket science, easy really!
This book will also help you identify from a good photo a lot of the cleptoparasitic Nomada bees which look like wasps. Here are two flying at the moment:
Nomada fabriciana (Fabricius' Nomad Bee) female, look at the red in the middle of the antennae, parasitises several Andrena but commonly bicolor and flavipes abundant on the coast here: 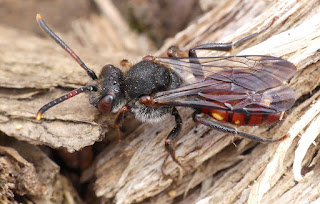 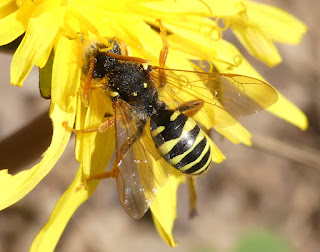 Note the shape, colour and position of the yellow spots on the thorax and abdomen. Not all Nomada are this easy though.
A sure sign of strong bee colonies are Bee Flies of the genus Bombylius and this discolor (Spotted Bee Fly) was a long way east, just west of Caswell. 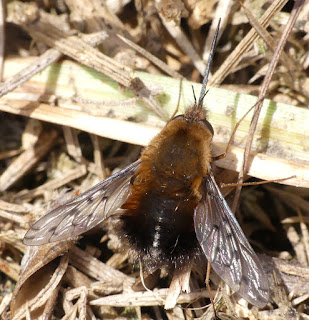 These and other species such as Oil Beetles and Satellite Flies also take advantage of the bee's supplies to rear their own young at the Bee's expense. There is a lot of stealing within the bee/wasp group anyway, they are really interesting to study.
Much more information is available on the BWARS website which also has a link, under resources, to Steven Falk's Flickr pages with a huge mass of pictures and information:
http://www.bwars.com/

I will leave this here for anyone who does not get the BAY magazine and likes insects. 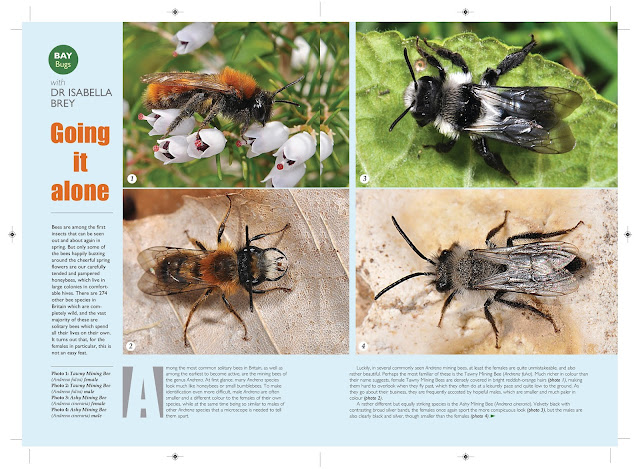 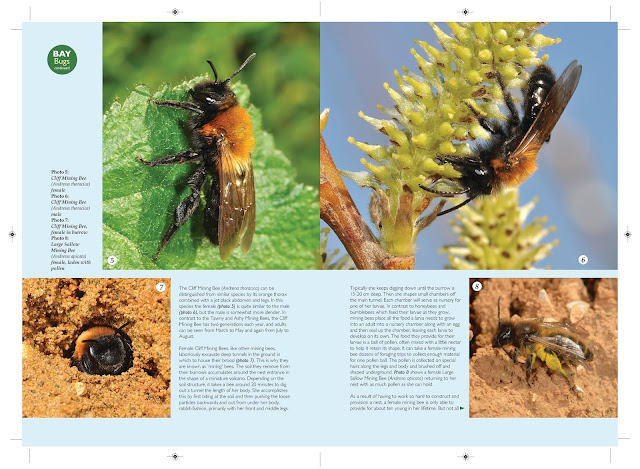 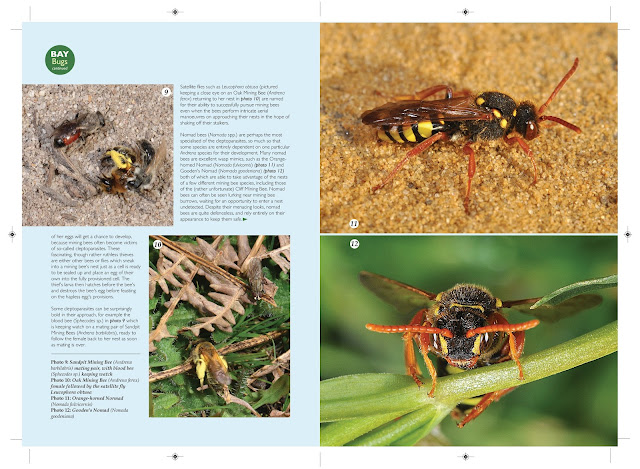 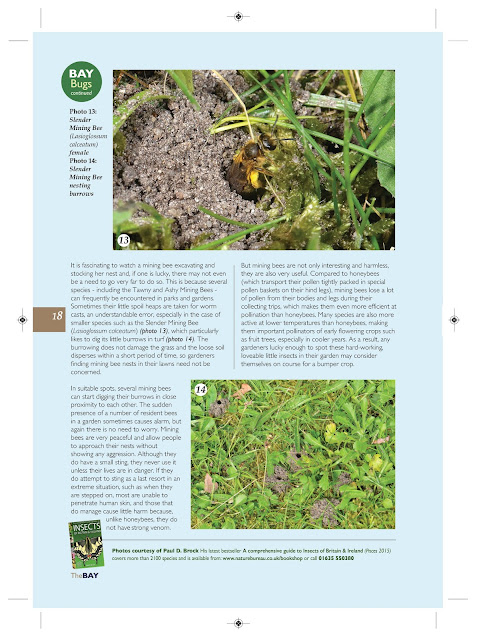 
It's UK distribution is limited to Gower