Leaf-cutter Bee in the Garden 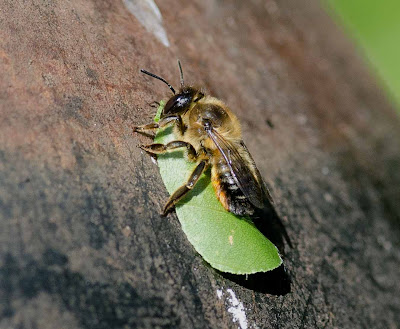 I was in the garden this evening thinking the lawns could do with a bit of a trim and this Leaf-cutter Bee flew past me showings signs that she had already made a start on the hedges! I don't have a great deal of literature on Leaf-cutter Bees but this one does seem to show features consistent with the most common British species, the Patchwork Leaf-cutter Bee (Megachile centuncularis), notably the orange hairs on the underside of the abdomen. 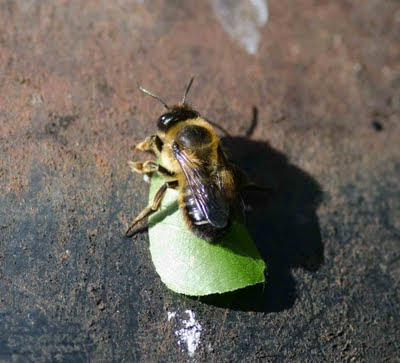 A bit of late news from Sunday 26th, another Longhorn, this one taking shelter from the breezy conditions briefly before flying off. Once you get your eye in beetles look quite obvious when they are in flight, unfortunately this also means that you realise how many are not stopping for you to take a closer look at.
Also a very attractive hoverfly on the wing. Very distinctive and fairly common but like the Longhorn above I'd never seen this species before.
The only way is Essex, unfortunately not this time! However, I am hopeful of catching up with this recent colonist of the area, some time this year. The Essex Skipper (Thymelicus lineola) shows black tips to the underside of the antenna unlike the Small Skipper which has orange tips underneath.

If you decide to walk this route be very mindful that off road vehicles (and normal vehicles) can also use this route for a limited time running between June and August. One kid in a Ford Fiesta was travelling at well over 50mph along the forestry track while I was there, fortunately for me I wasn't near the track when he past me.
Posted by Mark Hipkin at 16:34 No comments: 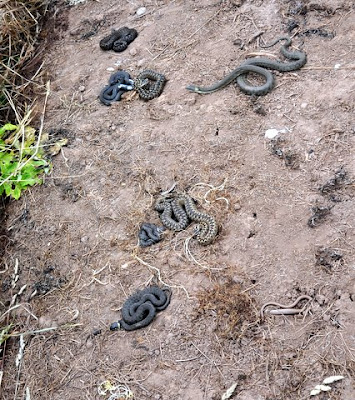 Gordon Howe sent me this image showing quite a remarkable assemblage of Adders Grass Snakes & Slow-worms under a black plastic sheet in the Nitten field at Mewslade yesterday. Gordon and Beryl have maintained a grassy headland around the margin of the field for a good few years now and clearly this, in conjunction with the sacrificial crop they grow annually, supports a healthy small mammal population that keeps these reptiles well fed! The field also has Common Lizards, although these are a bit more elusive. 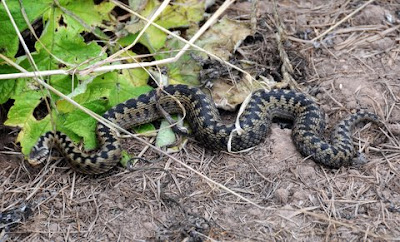 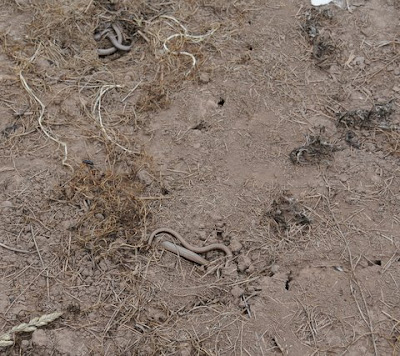 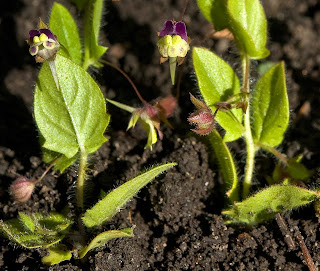 I've seen Sharp-leaved Fluellen (Kickxia elatine) elsewhere in Glamorgan before, but until yesterday, never in Neath Port Talbot. These were growing out of gravel and tarmac near Brunel Dock. This fantastic little snapdragon is better known as an annual weed of arable land and has become increasingly scarce in recent years like many other arable weeds. 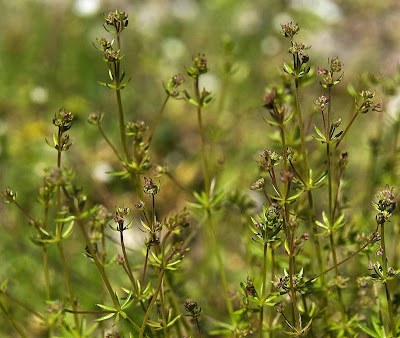 Nearby, there were numerous clumps of this rather nondescript bedstraw. It turned out to be Wall Bedstraw (Galium parisiense), a rather rare plant more typically found in eastern England and a long way west of its normal, native range. This could be a new county record (Barry should be able to tell us) and it is interesting to speculate on how it got to Neath Port Talbot. One possibility is that it was introduced in the wild flower seed used in the grasslands around Brunel Dock and the Quays. It seems to be well established, but it is an annual so it may not be able to establish itself there in the long term. Time will tell. Unlike the common bedstraws it has pinkish-green flowers.
Other characteristic features include the forward pointing prickles on the edge of the leaves. The older leaves also tend to deflex. 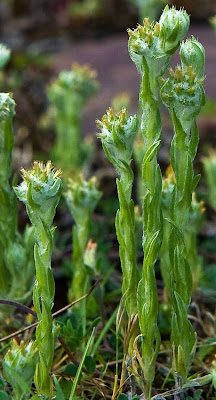 About a mile away to the west, across the other side of the Briton Ferry Bridge, and in a similar habitat, there is a fabulous little population of Common Cudweed (Filago vulgaris). This is another species which has undergone a large decline in recent decades - not so common cudweed anymore! However this is now the fourth site for this species in Neath Port Talbot in recent years. It too is an annual and it rarely persists for more than 3 or 4 years any where in my experience.

All these plants require the sort of open disturbed habitats associated with brownfield sites.
Posted by Charles Hipkin at 22:11 3 comments:

A comparison of the last two nights moth trapping in our Gorseinon garden provides a good idea of the diversity and abundance of moths that can be found in a fairly ordinary suburban site. The same trap was run in exactly the same spot on both nights (but not set until midnight on the 26th to give time for the previous nights moths to disperse) and the increase in diversity noted on the 26th is probably a function of the increased temperature that evening:
[NB Scientific names given in italics where no vernacular name exists]
A few photos of a selection can be found at http://gmrg-vc41moths.blogspot.com/2011/06/gorseinon.html