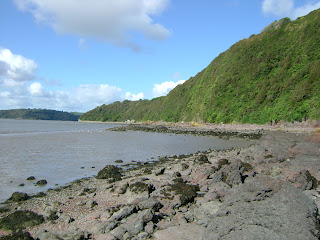 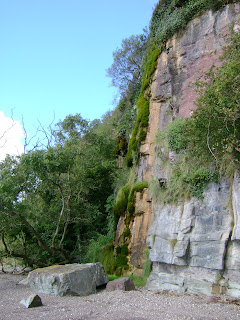 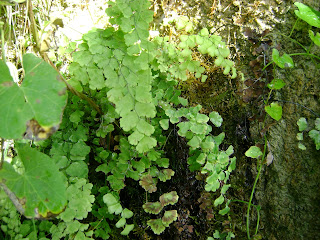 The maidenhair fern Adiantum capillus-veneris has been known (as a native species) from tufa cliffs [see photo 2 above] below a small Carboniferous limestone outlier at Craig Ddu since the late 1980s. The rather inaccessible cliffs SW of Llansteffan are otherwise mostly Old Red Sandstone, with dense scrub woodland, which includes much dogwood and spindle in the shrub layer. The more open sections have bloody cranesbill Geranium sanguineum, ploughman`s spikenhard Inula conyza and thyme Thymus praecox etc. Sea spleenwort Adiantum marinum grows in sea-caves.
The maidenhair fern peaked at c 60 plants in September 1998, but the two cold winters of late adversely affected this Mediterrannean species and only 5 were seen last week.
Posted by Ian Morgan at 11:35 No comments:

Well that's it then, maybe thank god for that after such a summer!

On saturday the Ivy hedge of the Old School House in Oxwich was alive with a fantastic variety of hoverflies, other flies, Mellinus arvensis in tens hunting the flies and butterflies including a Painted Lady. However, what I was much more pleased to see were at least seven Colletes hederae. The three I photographed were all males so I guess it's the very start of the season and the boys are out early to play and await the females.

If you feel like it and we get a good day a check of Ivy hedges, always a good thing to do anyway, might reveal other populations of this new immigrant. Also keep an eye out for mating aggregations which is something I would love to see.

Records should be posted here: 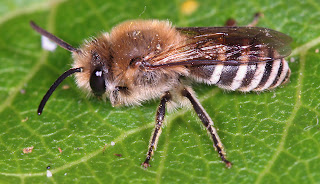 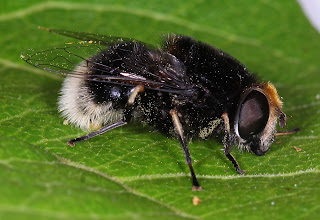 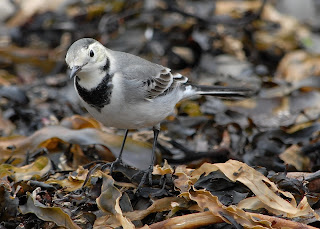 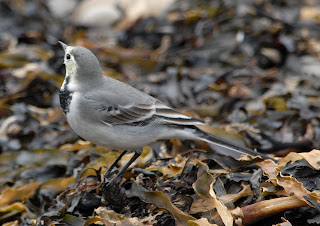 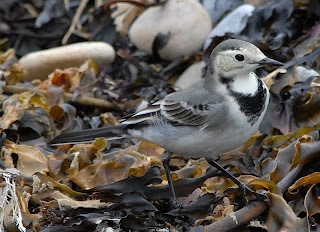 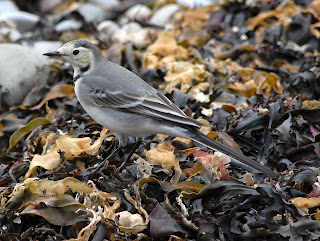 Three birds at Limeslade Bay yesterday and one again this morning.
Posted by Derek & Chris Thomas at 12:21 No comments: 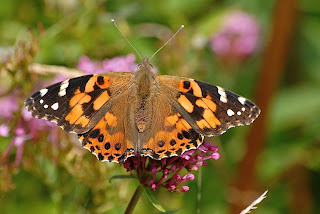 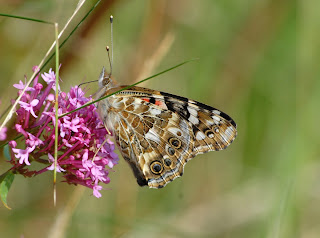 Seen very few this year.
Posted by Derek & Chris Thomas at 12:47 No comments:

John Hewett wrote 'I spotted this handsome fellow beached on the high tide line at Rhossili bay last Friday. It has been a while since I have walked along this way and was taken aback by the volume of plastic washed up there these days. It's a wonder there is any fauna left.'
[Ed:  Even though individual Physalia physalis are not an unusual sight on the coasts of Britain and Ireland, mass standings are uncommon, occurring only 3 or 4 times a century (Wilson, 1947). The sting of Physalia physalis causes severe pain, skin lacerations, convulsions, respiratory distress and in some cases death (Williamson et al., 1996). The sting remains potent even after death and the tentacles should not be touched. Portuguese man o' war are carnivorous feeding mainly on small crustaceans and larval fish (Kirkpatrick & Pugh, 1984) ]

Posted by Barry Stewart at 12:30 No comments:

Harvestman in the bath 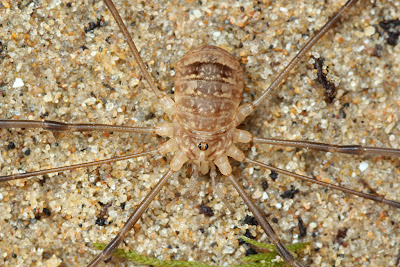 Last night I rescued this Nelima gothica from the bath tub. This is an uncommon species, though like many invertebrate groups is probably under-recorded.
Posted by Barry Stewart at 15:45 No comments:


At 22:30 just as I was jumping in the car I was amazed to hear a House Cricket singing in the front garden. The temperature according to the car was 12.C.  15 minutes later when I returned the temperature had dropped a couple of degrees and the singing had stopped, but another check 5 minutes later and it was singing once more albeit just for less than a minute.  A quick check on line confirmed the song was House Cricket (Acheta domesticus) rather than Tropical House Cricket (Gryllodes sigillatus). Hopefully it will be singing again tomorrow and I'll get a recording...

Has anyone else heard House Crickets - I suspect keepers of spiders and reptiles are probably the source of our cricket?
Posted by Barry Stewart at 23:23 No comments: 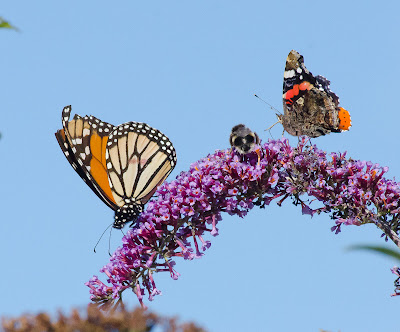 I felt it necessary to visit the Monarch today, especially since it's a Jubilee year.. He was stunning the crowds regally from an elevated position, and flanked by numerous admirals, when I arrived. Quite appropriately, this whole event was taking place not far from a gold postbox, Portland, Dorset.
Posted by Mark Hipkin at 23:30 1 comment:

Bored whilst waiting for Colletes hederae to appear, a non random collection of drone flies at Ivy from the Swansea foreshore turned out to be the following (all keyed from Stubbs and Falk using a x10 hand lens):

I should do more of this because photos of tinies with their wings over their backs are almost impossible to identify!
Posted by i.f.tew at 16:07 3 comments: 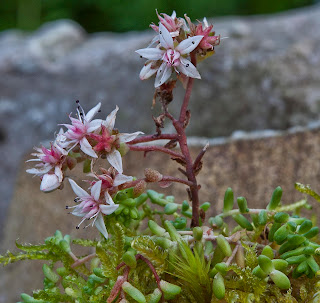 I first saw English Stonecrop (Sedum anglicum) in Cymmer in the 1970s when Quentin Kay and I were recording for the Flora of Glamorgan project. I'm glad to say that it's still there. This is an uncommon plant in Glamorgan with few recent records, so its survival in the Afan Valley is encouraging. It has a classic western Oceanic distribution in Britain and is widely distributed in west Wales. The area in which it grows in Cymmer also has abundant Bell Heather (Erica cinerea), another Oceanic species, indicating the biogeographic suitability of the area. The alien White Stonecrop (Sedum album) is a similar species and is much more common than English Stonecrop in Glamorgan.The leaves of White Stonecrop are bigger and rather chunky in comparison to those of English Stonecrop and its inflorescence is much more branched with abundant white flowers. Reflexed Stonecrop (Sedum rupestre) is another fairly common white-flowered, alien, garden escape species, but it is more robust than both English and White Stonecrop.
Posted by Charles Hipkin at 21:31 No comments: 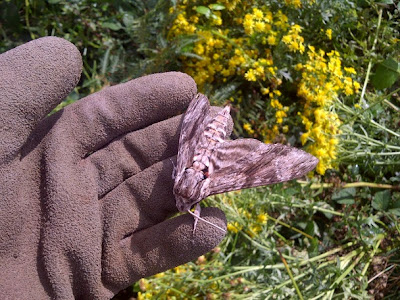 Clearly it’s the season for big insects. Another one to keep an eye out for is the Convolvulous Hawk-moth which is a regular but uncommon migrant to our shores. The individual shown was found by Steffan Tyrell whilst pulling ragwort at Llangennith on August 22nd and was photographed by his mum Allison.
Posted by Barry Stewart at 20:29 1 comment: 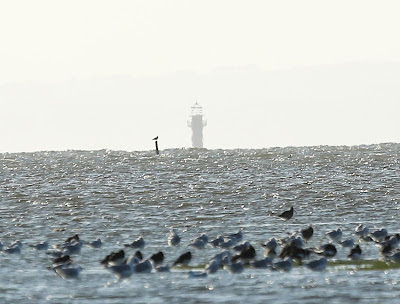 Dai Roberts sent me these two images of Ospreys taken this year; one at Llanrhidian (there were of two birds present last Thursday) and one in Florida. If you want really good views of Ospreys I suggest  you go to Florida! 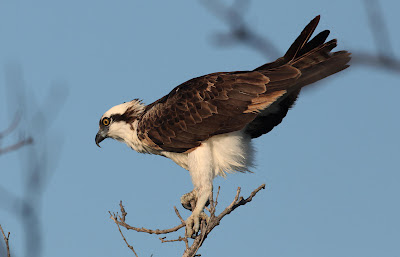 Posted by Barry Stewart at 09:16 No comments: 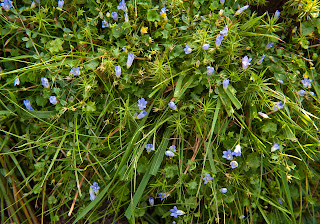 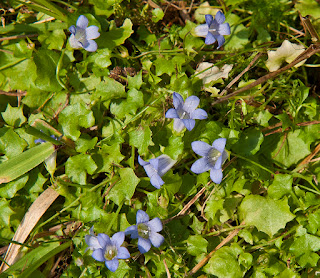 Ivy-leaved Bellflower (Wahlenbergia hederacea) is an uncommon and declining species in Britain, confined mostly to Wales and the south west of England. With such a striking western oceanic distribution, occupying most of Wales, there are few species with a stronger claim to be Welsh – see British distribution on the BSBI site:-

It grows on the grassy banks of upland streams as well as in marshy grassland and on wet heathland and although plants are small and easily overlooked, it is fairly conspicuous at this time of year. If you’re in the right habitat, there’s little else you can confuse it with. Look for small, pale blue flowers set against a mass of pale green, flimsy, ivy-shaped leaves, usually among grasses and mosses. It’s a real gem! The plants in the photo were growing along the overhanging banks of the Melincourt Brook in the Neath Valley, out of the reach of hungry sheep, the main grazers in many of its favoured habitats. Excessive grazing by sheep may be one reason for its recent decline. In Glamorgan it has been recorded most commonly in the upland areas of the South Wales Coalfield, particularly  in Rhondda Cynon Taff and Bridgend County. It appears to be less common in Swansea and Neath Port Talbot. Given the decline of this species in Britain in general and its importance to the biodiversity of Wales, it would be nice to know more about the current status of this species in our area.
Posted by Charles Hipkin at 19:34 7 comments: 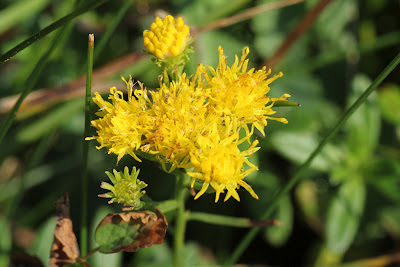 Listed as Nationally Scarce, Goldilocks Aster (Aster linosyris) occurs at only half a dozen sites around the UK. All populations are small but relatively stable. Mervyn Howells has monitored the Gower sub-sites regularly for many years and with the onset of the flowering season took me to most of the known sites, where as well as carrying out counts, we looked at some of the management issues at each. 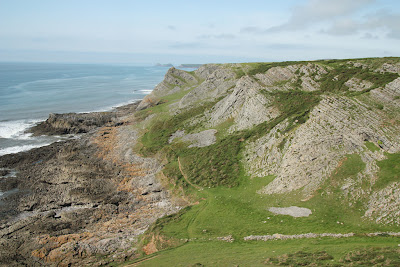 All along the cliffs of South Gower coastal heath has developed on glacial head deposits that spill down the slopes between Limestone outcrops. Gorse is invariably the dominant species in these more acidic areas and provides Goldilocks Aster protection from grazing animals. However, the aster will only grow through Gorse that is generally less than 20cm high and it only grows in calcareous soils, so is restricted to areas where the deposits are shallow enough to reduce the vigour of the Gorse enabling the limestone flora to compete. 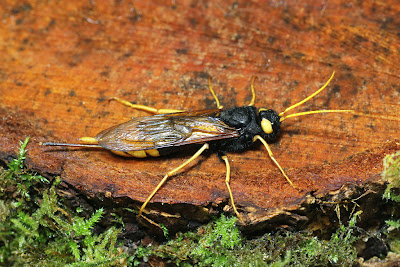 This impressive specimen was brought to me by Mike Thornton who found it in his sister's garden in Pontypridd. It's a species I have rarely seen and am curious to know if others have seen it locally. Neither of the tail projections sting, the long one being used for inserting eggs in wood, upon which the larvae feed.
Greater Horntail Wasp (Urocerus gigas) belongs to the suborder Symphyta (wood wasps and sawflies) and at around 40mm long is one of our largest insects. The colouring is presumably mimicry of the hornet, which no doubt offers it good protection.
Posted by Barry Stewart at 11:20 6 comments:

This digger wasp was found over the weekend at Crymlyn Burrows, inspecting some drift wood along the extreme strand line (at the base of the dunes). It looks close to images I have found of Ectemnius cavifrons, but the reality is that its identity cannot be called safely from the photos I took, not by me at least!
Another invertebrate that I didn't capture on camera, but saw briefly, was a Coelioxys sp. also known as Cuckoo bee or Sharp-tailed bee. This parasitic species of bee lays eggs in the nests of Leaf-cutter bees.
Posted by Mark Hipkin at 16:44 No comments:

Friday Blackpill on Soapwort.
Saturday Cheriton on Red Valerian.
Posted by i.f.tew at 09:54 No comments: 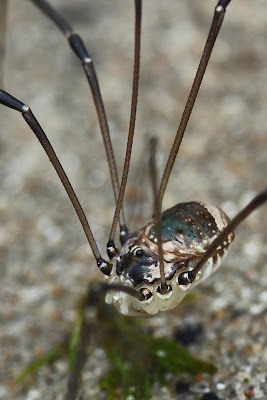 This attractive and relatively large harvestman was hiding under an upturned bucket by the garden shed this afternoon. Key features include the long, narrow tarsus of the pedipalp (visible in the upper image tucked under the body), smooth body, bi-spotted trochanters (first joints on legs) and the whitish rings around the eyes being separated by a narrow black band. 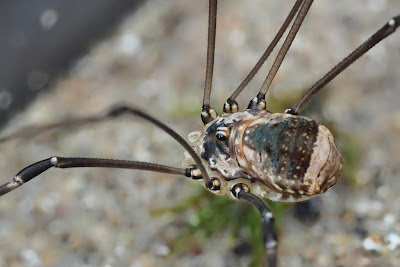 Posted by Barry Stewart at 19:52 No comments: