Returning home last night at 5pm I was sorry to see a Pipistrelle sized bat flying around in Singleton Park, presumably the result of the mild winter, being tempted out to feed or forced by burning up the stores too soon?
Posted by i.f.tew at 09:28 2 comments:

Dear Members,
FRIDAY 24th JANUARY 2014
It is time for the annual quiz again.  This year the Margaret Price Memorial quiz will be set by Alastair Flannagan because he won last year’s.
The quiz will be a test for the experts and fun for those like me who have a more basic knowledge, but always an enjoyable evening, so do try to join us, support the society and have a bit of fun.
Doors open soon after 19.00 on Friday  with kick-off at 19.30.  Admission is just £1.00 each to cover costs.  I look forward to seeing you all.
Kind regards
Jeremy

Posted by Barry Stewart at 17:44 No comments:

Details and photo of a Kemp's Ridley Sea Turtle (Lepidochelys kempii) found on Cefn Sidan can be viewed here. I wonder what else might have been washed up? Sea Beans (Entada gigas) are a good possibility and well worth looking for...
Posted by Barry Stewart at 08:51 No comments:

On 15th January 2014 Tim Orrell photographed Mediterranean Gull [White E817], now on its third colour ring. It was originally ringed as a bird in its third calendar year on 19 May 2005 at Antwerpen, Belgium and has been resighted on no fewer than 112 occasions. Its favoured winter haunt is Porthcawl where Steve Moon has recorded it an impressive 54 times. Other South Wales sites it has visited are Kenfig, Bracelet Bay and Blackpill and the list of Welsh observers include Nicholas Beswick, Andrew Bluett, Aleksey Burton, Jeff Curtis, John Davies, Simon Harrison, Mike Hogan, Bob Howells, Alun Hughes, Alun John, Iain Lambert, Mike Powell, David Smith, Ian Smith, myself Tony Swann, Terry Tovey and the late Barry Weston.
Posted by Barry Stewart at 10:17 No comments:

After gaining permission to look at Stout Hall woodland yesterday in rather miserable conditions, we were very impressed by the growth of mosses on secret garden wall; the bulging cushions of Rambling Tail-moss (Anomodon viticulosus) being particularly impressive. Other conspicuous associates here included Flat Neckera (Neckera complanata), Fox-tail Feather-moss (Thamnobryum alopecurum) and Tender Feather-moss (Rhynchostegiella tenella). On a nearby Sycamore the raspberry-like perithecial stage (the sexual spore producing) of the pathogenic fungus Coral Spot (Nectria cinnabarinna s.l.) was evident on many of its twigs. 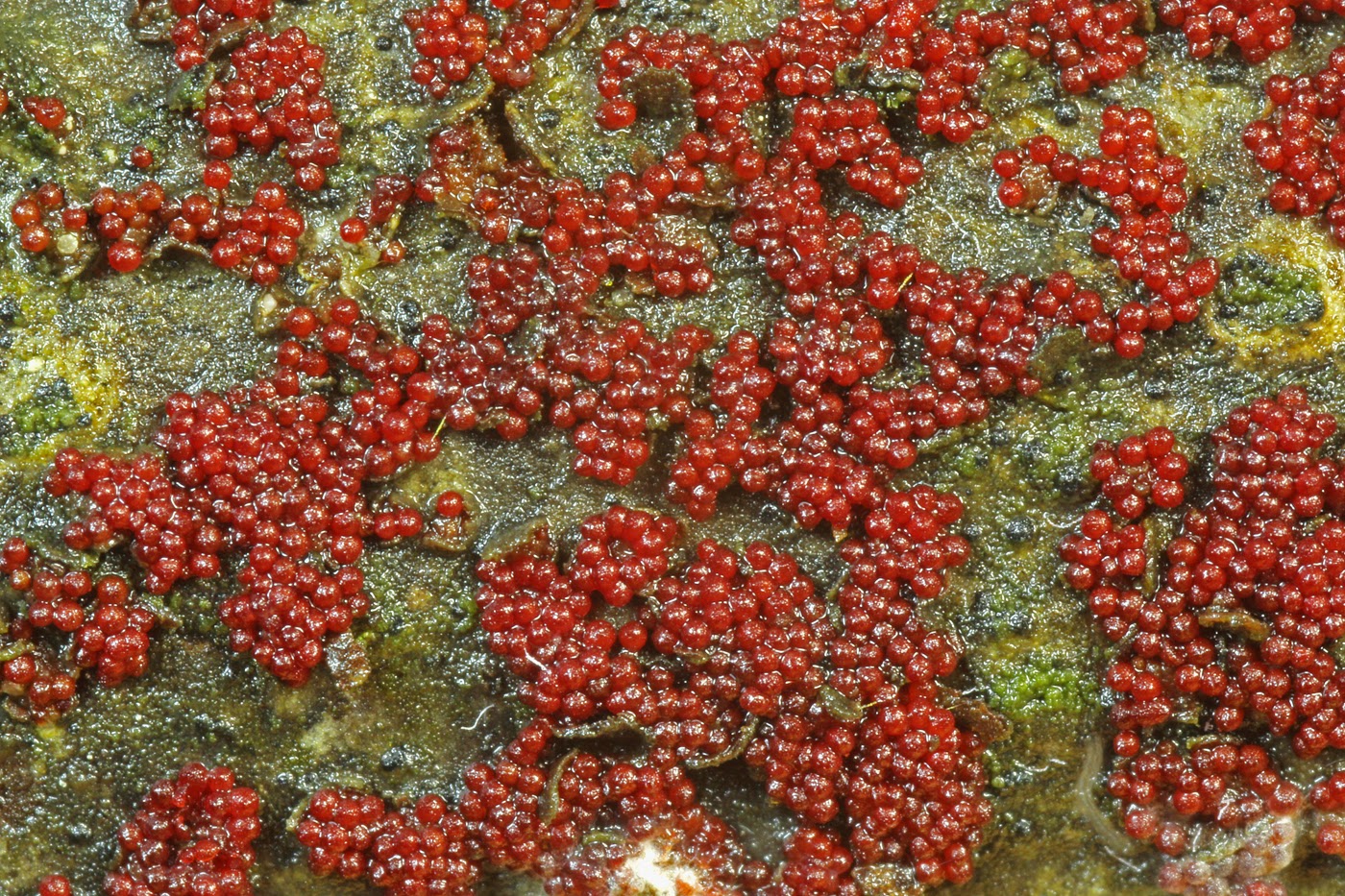 Posted by Barry Stewart at 10:21 No comments:

Two unseasonal records of reptiles were made in the first two weeks of January: The first record concerns what at first appears to be exceptionally early Adder Vipera berus activity, the above individual having been photographed by Nick Edwards in South Gower on 9th January, but was also seen earlier in the month. Nick and Gareth Dockerty have now seen Adders in every month of the year, including winter-active animals on multiple occasions at different localities. They strongly suspect some Adders don't hibernate as conventionally believed, but instead take the opportunity to bask during favourable weather and keep on feeding if they can throughout the year. Their observations and photographs certainly add credibility to this theory. As winter reptiles are likely to be far more vulnerable to the adverse effects of disturbance, if you are fortunate enough to encounter one, try to avoid disturbing it.

The second record concerns a 1.5kg terrapin which was hauled up the bank of Brynmill Park pond on the 8th January and taken to the Gower Bird Hospital and later identified by the Sully branch of the International Tortoise Association as a 35 years plus female Yellow-bellied Slider Trachemys scripta scripta. This species was previously reported from the same locality by Simon Allen of the GBH on 2nd August 2011 when at least six terrapins were noted [Link to sighting Here]. Rumour has it there are now only two animals left at this site.

Posted by Barry Stewart at 14:44 No comments:

Incredibly, four American vagrants have turned up in Gower within the space of a week! Surf Scoter, Thayer's Gull, American Herring Gull and today Black Brant. With more westerly gales forecast, maybe there's more to come? One of the main reasons for this bonanza is the glut of food made available by the storm affected Rhossili Bay, which has over 5,000 Scoter and 2,000 Herring Gulls feeding on the disturbed benthic communities. Well worth a trip down there to soak up the atmosphere of the place at present and to check out the details of these and other local rare bird sightings click here.