A Chinese Stowaway - a mystery mugwort.

Yesterday (14/8) evening, I visited the North Dock dunes LNR on the north shore of the Burry Inlet, Llanelli to look for moths at dusk. As part of that activity, I was targeting (ie `beating` and `sweeping`) various plants which I know have micro-moths associated with them - tansy, sea campion, marjoram etc. I also looked at stands of common mugwort Artemisia vulgaris, which has a particularly attractive tortricid associate that I`d already recently recorded at nearby Machynys.
Looking through the pathside vegetation on the saltmarsh edge of the main track that goes along the whole length of the dune spit on its eastern side, I noticed a very tall plant (approaching 6ft) which, from afar, I did n`t recognise.

Above: the mystery Artemisia standing proud of surrounding vegetation.

Upon approaching it, I immediately thought `mugwort again` but I then also noticed that the leaves were very linear indeed. Thinking that this was unusual, I collected a few leaves to compare with common mugwort which, conveniently, grows on the other (duneward) side of the path and they were indeed noticeably different. 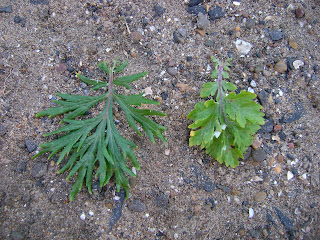 Above: typical leaves of the mystery Artemisia (left)  and A. vulgaris.

Driving away from the site, I vaguely remembered that there was an alien mugwort called Artemisia `verlot-something` (I could n`t remember what it was exactly). At home, it  seemed that it was possibly Artemisia verlotiorum `Chinese mugwort`. However, further inspection suggested that it did not quite `fit` that species, with some characteristics being intermediate. `Googling to see if hybrids existed between vulgaris and verlotiorum I came across several references including the useful paper in Watsonia 23:139-147, (2000).
I wonder if it possibly may be - but I`m not completely convinced - the hybrid A. wurzellii? Incidentally, this paper comments that `there is no convincing evidence that the hybrid arose in situ` [at any of the sites where it was recorded]. I have collected material which I`ll pass on to Richard Pryce, the Carmarthenshire BSBI Recorder for his `processing`. 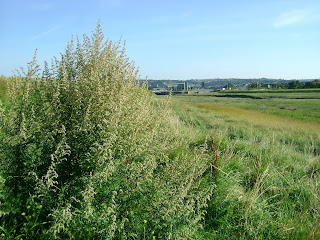 Above: another view of the problem plant.

The tongue-in-cheek `stowaway` element in the title alludes to its possible origin at this site. The dune spit is actually developed on a foundation of dumped copper slag from an 18th-19th Century nearby copperworks, augmented (or preceded) by loads of ship ballast from the early days of the port of Llanelly`s trade (the old anglicised spelling of Llanelli as used in that period). About 18 months ago, there was much work undertaken to strengthen the seaward side of this dune spit and, to allow access by large lorries and earth-moving vehicles, the track was widened, disturbing the copper slag/ballast core in the process. Possibly, the plant originated from long-buried seed or was brought it by the large lorries and other vehicles from elsewhere?
I`m not sure about the true identity of the above plant but it is distinctive and differs from A. vulgaris which frequently grows elsewhere at this site. Perhaps it is just well grown because of its position on the damper uppermost part of the saltmarsh transition - but the leaves are consistently narrower. I need to check out other plants of A. vulgaris growing on richer soil elsewhere in case I`ve been `misled` into a botanical `wild goose chase` by the broader leaves of plants of this species on the dunes. Hopefully, we`ll find out in due course.
The grid ref of the plant (obtained from `find a grid reference` where I estimate it was on an aerial photo - so it may not be 100% accurate) is SS49833 99022.