An afternoon in the Pelenna Valley 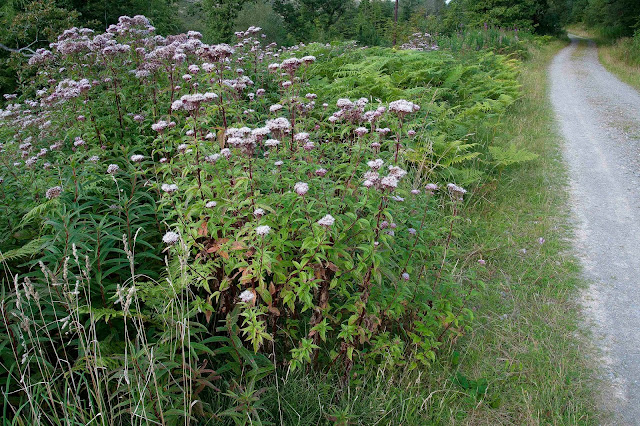 There's a nice walk along a quiet forestry road in the Pelenna Valley that goes from Ton Mawr to the Coed Morganwg Way near the top of the Melincwrt Valley. Wet, Purple Moor-grass verges are full of Bog Pimpernel (Anagallis tenella) in places and the gravelly edges of the track have a fairly typical forestry track flora, which includes Trailing St John's-wort (Hypericum humifusum) a characteristic species in this type of habitat in Neath Port Talbot. 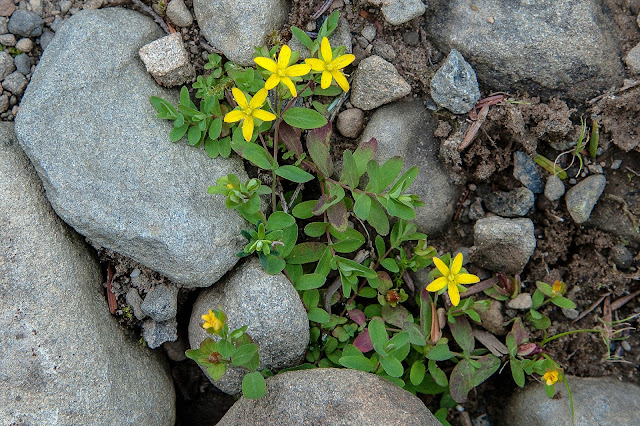 The conifer plantations along the road are good places to look for fungi in autumn, but yesterday there was little to see except a dried up troop of the Birch Knight (Tricholoma fulvum), which grows with Sitka Spruce here, and some Whitelaced Shank (Megacollybia platyphylla), which grows on buried wood. One of the identification features of this common toadstool is the presence of white mycelial strands that arise from the base of stipe, which can be seen in the photo below. 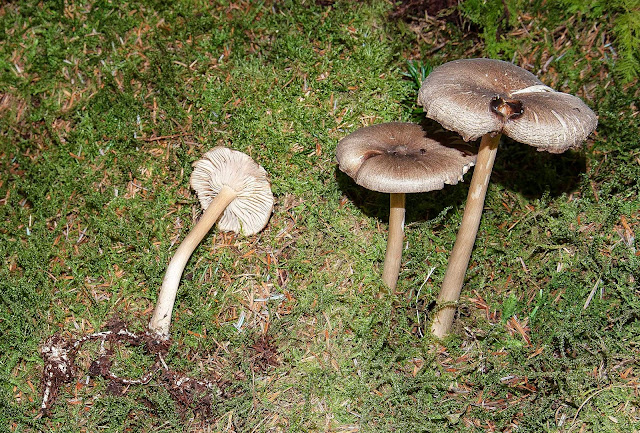 At this time of year the tall herb flora along the track has lots of conspicuous Rosebay Willowherb (Chamerion angustifolium) and Hemp Agrimony (Eupatoria cannabinum). These are good places to look for inverebrates at this time of year. For example, an  Elephant Hawkmoth (Deilephila elpenor) caterpillar was seen chomping its way along the midrib of a Rosebay Willowherb leaf. 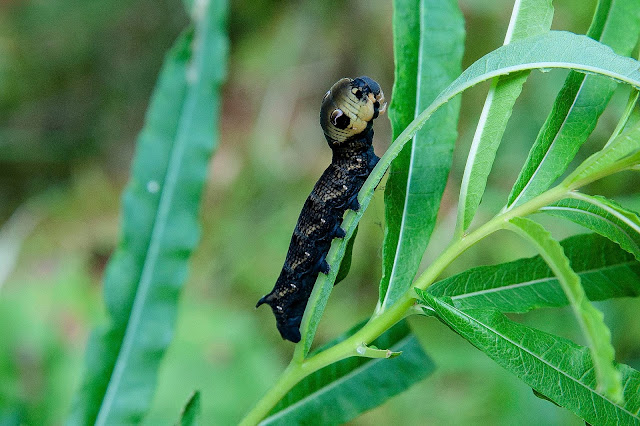 Elephant Hawkmoth caterpillar on Rosebay Willowherb in the Pelenna Valley

Nearby, a hornet-mimicking hover fly, Volucella zonaria, was feeding on some Hemp Agrimony flowers. This large, handsome hoverfly first appeared in southern Britain about 75 years ago and it has been extending its range westwards ever since, particularly in the last 20 years. Numerous individuals have been recorded in South Wales in recent years. Judging from its torn, weather-beaten wings, this individual must have 'been around the block a bit', but it was a powerful flier nevertheless, with a loud buzzing flight. 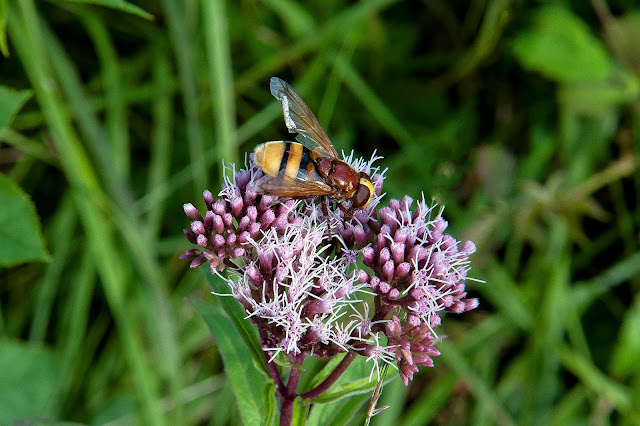 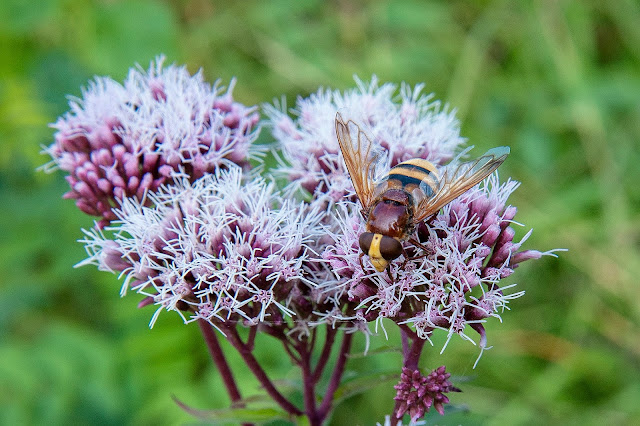 Volucella zonaria on Hemp Agrimony in the Pelenna Valley

Been meaning to say. Eve and I walked along the cliff top at Pennard towards 3 Cliffs when two weasels rushed along and across the path in front of us; a few moments later one dashed back again. I readied the camera in case the second one followed but to no avail.
Lots of Autumn Lady's Tresses though, which I hadn't realised was an orchid. 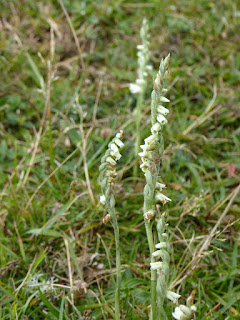 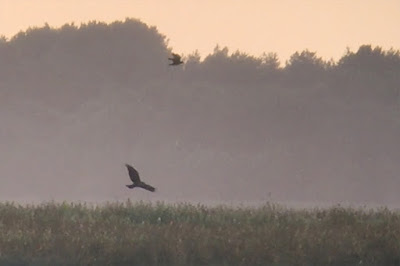 The video link HERE shows one of at least five different Marsh Harriers that have appeared at Llanrhidian Marsh during the course of 2015, this being a good total for an area well away from known breeding sites. With sightings elsewhere in the county, 2015 may prove to be one of best years on record. The map below shows the distribution of all sightings in Glamorgan, with those seen in 2015 in black. 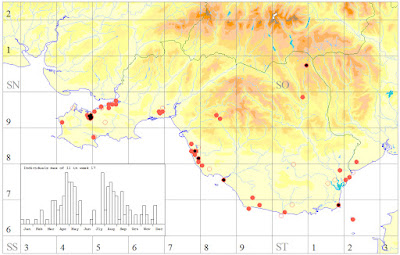 I am very pleased to be able to follow up my earlier post with good news. The Fulmar chick at the nest site on Lewes Castle is now flying. Since I first saw the chick on July 30 I have visited the site every 3-5 days and, if possible, photographed the chick as it developed. The nest site is the area behind a boulder on a ledge, and the gap between the cliff edge and the boulder edge is only a few centimetres, so unless the bird lines its head up with the narrow gap it is impossible to get a decent shot. Although I have visited 11 times, sometimes staying for over an hour, I have never seen an adult feeding the chick, or present on the nest ledge. Clearly being a Fulmar chick is a lonely business.

Every time I have visited there have been no climbers on Lewes Castle, which has been a great relief to me. I would like to thank any climbers who have deliberately kept away from the site in order to help to ensure this bird's survival. It is now OK to climb there again for a few months.

This is the chick when I first saw it at the nest site on July 30: 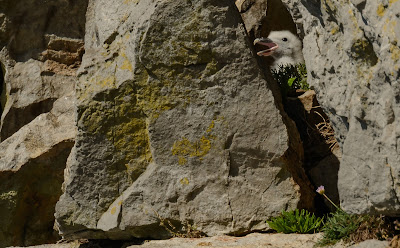 Three days later, on August 2, the chick had visibly developed: 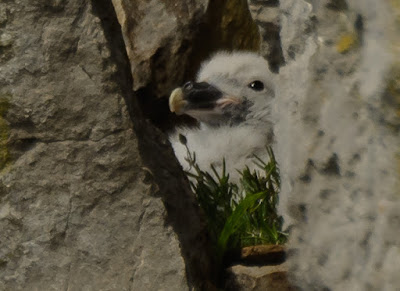 A further five days later, on August 7, the bird was substantially larger and had some staining which may indicate that it had recently been fed: 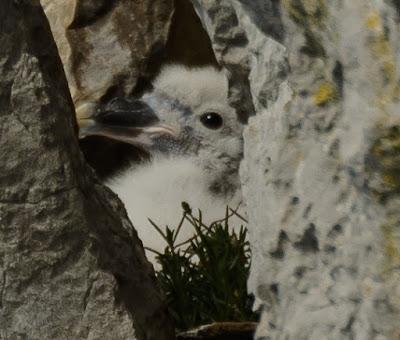 At this stage it is showing signs of losing some of the downy feathers on the head. On August 12 a lot more had been lost from the back of the head: When I next visited, on August 16, the bird was almost bald: 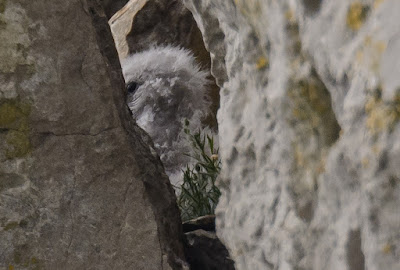 I have never been able to follow the development of a Fulmar chick before, so I was surprised to see this apparent avian alopecia. I wondered if the bird had a problem of some kind. The next time I was able to get a decent view of the bird was on August 22. I was pleased to see that, over the course of six days, it had grown a good covering of feathers on the head: 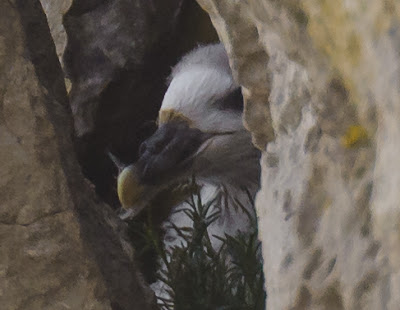 At this stage the bird was very preoccupied with preening. This was still the case on August 27, and the bird was now looking quite mature and only very slightly smaller than adult-size: 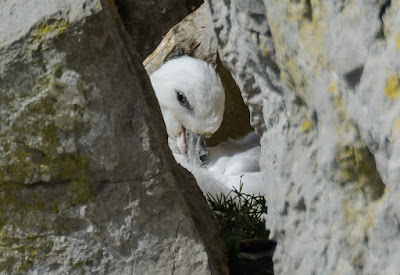 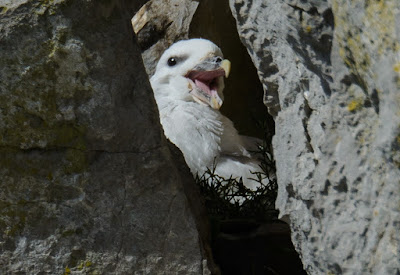 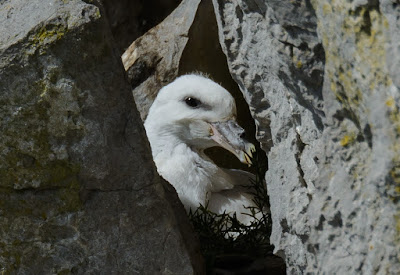 At this stage (August 27) the bird still had some fluffy down on the head. I caught glimpses of the wings, which appeared to have well-developed coverts and secondaries. I did not see the primaries. When I next visited, on August 31, the bird looked very much like an adult: 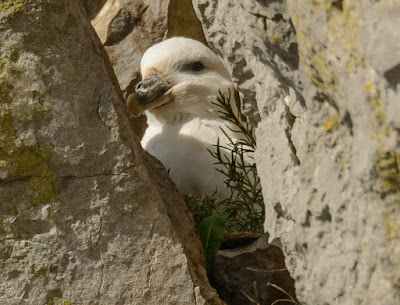 On this visit I could see that it had well-developed primaries. It looked as though it should be able to fly perfectly well. It was therefore no surprise, when I visited on September 2, to find the nest site empty. This suggests that it took about 48 days from hatching to fledging, which is about normal, I understand. I returned to the nest site early on September 5 and found that the young bird was present again: I presume it had roosted there. It was preening and doing a lot of wing-stretching, showing a perfect pair of wings: 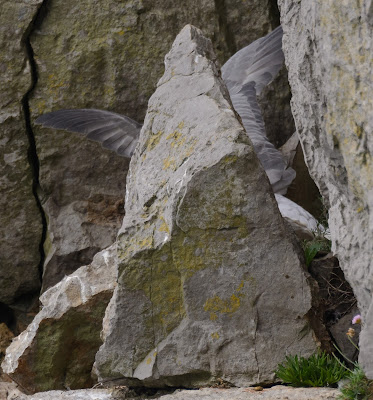 It has been very interesting to watch the development of this bird. I hope there will be a repeat performance next year.