Some aliens along the River Neath 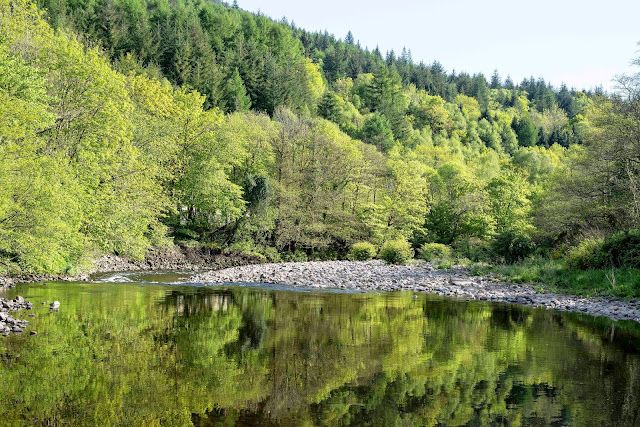 The River Neath and its riparian woodland

The narrow corridor of deciduous woodland that runs along the River Neath from Glyn Neath to Neath town is an extremely important habitat for wildlife in Neath Port Talbot. It is rich in ancient woodland species and one of the few places in the county where you can see native Primrose (Primula vulgaris) growing with Wood Anemone (Anemone nemorosa), Wild Garlic (Allium ursinum), Dog's Mercury (Mercurialis perennis), Sanicle (Sanicula europaea) and Bluebell (Hyacinthoides non-scripta) under the occasional canopy of Small-leaved Lime (Tilia cordata). Once upon a time, this narrow strip of riparian woodland, dominated by Wych Elm (Ulmus glabra), would have occupied a much wider margin that is currently taken up by grazed, alluvial meadows.
Among the desirable natives, a number of infamous, high impact aliens well known to all of us, such as Japanese Knotweed (Fallopia japonica) and Himalayan Balsam (Impatiens glandulifera), have colonised the riparian corridor aggressively in the last 75 years. More recent exotics include the Spanish Bluebell hybrid (Hyacinthoides x variabilis), which in my experience is much more common than pure Spanish Bluebell (both are sold and grown as garden plants), and Montbretia (Crocosmia x crocosmiiflora), a classic garden throw-out species. Cotoneaster species and Wilson's Honeysuckle (Lonicera nitida) are also represented.
Less common aliens which have become well established include Star-of-Bethlehem (Ornithogalum umbellatum subsp.umbellatum). 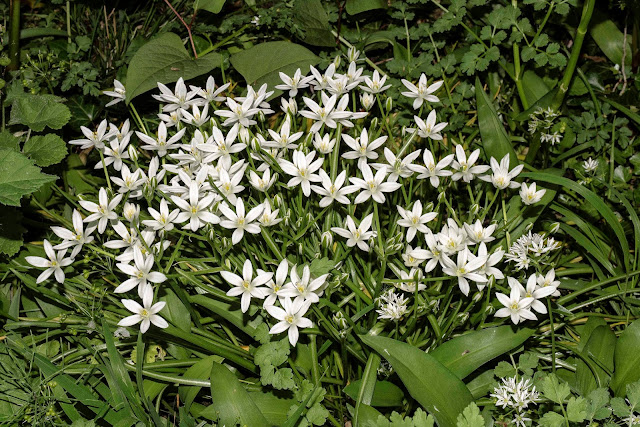 This attractive plant has become well naturalised in the riparian woodland near Glyn Neath, growing among the Wild Garlic and Bluebells. Nearby, there are some colourful patches of Greater Periwinkle (Vinca major Var. major) and a well established clump of Chinese Holly-fern (Cyrtomium falcatum). 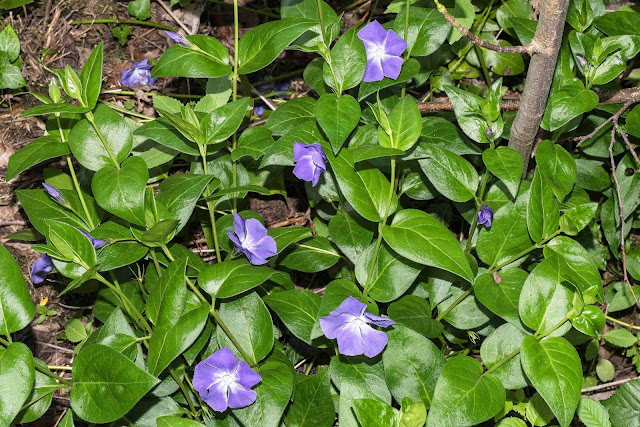 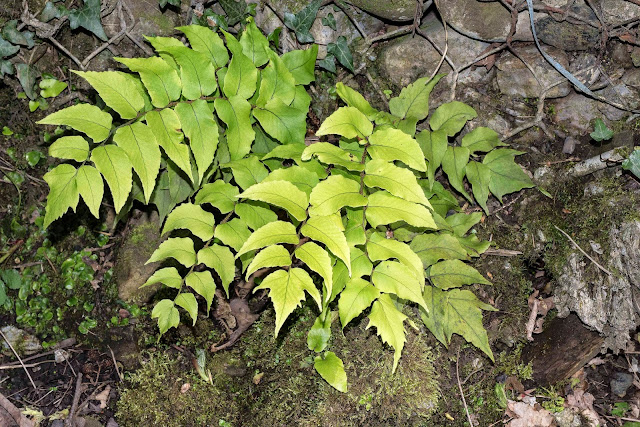 Star-of-Bethlehem and Greater Periwinkle are hardy garden plants, adapted to the rigours of the British climate and their occurrence as 'garden escapes' in our countryside is not particularly surprising.  But, the occurrence of Chinese Holly-fern doing so well here is fascinating, because it is usually grown indoors as a pot plant. It is a native of East Asia which requires warm, moist conditions to grow. It has been established as a wild plant in the mild climate of the Scilly and Channnel Isles for many years.  It will be interesting to see if  it will be able survive in Glyn Neath in view of the harsher winters that may accompany the new, forthcoming El Niño cycle.
Posted by Charles Hipkin at 18:29 5 comments:

Sausage Beard Lichen at Bynea: a lichen to my liking.

I went out yesterday afternoon near Berwick Roundabout, Bynea, Carmarthenshire, on the coastal flats just west of Loughor Bridge, to look for diurnal micro-moths but I only found one common species. As so often happens in natural history, other things turned up as compensation, with several singing Cetti`s warblers in the wet carr and wetlands and the loud rattling song of a lesser whitethroat, successfully competing with the roar of passing traffic, at the edge of the adjacent A484.
Best of all, though, was chancing upon a clump of Usnea articulata, the so-called `sausage beard lichen`. The single clump that I initially saw may well be the surprise find made by Simeon Jones a couple of years back at the same, or nearby, site but later, I noticed (I was n`t specially looking for it) a hawthorn that had multiple clumps of this BAP and Section 42 lichen. It is quite distinctive and easy to identify - hence my title.
Rather than waste time writing about it, I suggest that you google for an excellent article by Sam Bosanquet - Usnea articulata in Wales: a rare species on the move. By googling the title, you will be able to read both Sam`s article (with better photos than mine!) and also see, on the same page, a link to the `Lichens of Wales` website. 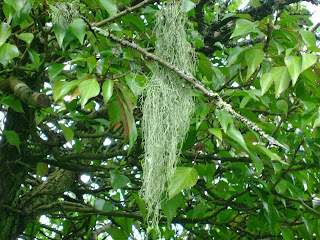 Above: the single individual clump. 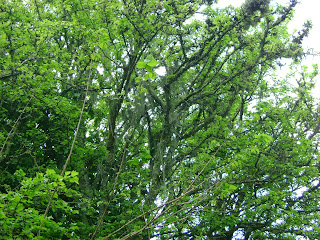 Above: a hawthorn with  multiple clumps.
Posted by Ian Morgan at 12:49 No comments:

The weather on Saturday eventually relented enough to allow exploration of the cliffs south and east of Southgate. Flowers now starting to bloom in profusion. 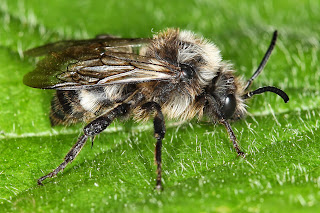 This Melecta albifrons female was working the holes in the muddier bits of soft cliff in Deep Slade looking for places to lay in the nests of Anthophora plumipes, of which there was no sign. Interesting that the holes were not sealed, at least on the surface. 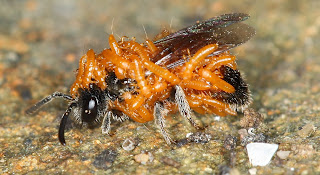 This poor little bee, a species of Sphecodes, has picked up more than the normal load of little cling ons. These are the larvae of Meloe proscarabaceus (Oil Beetle) which wait for bee visitors to flowers and then hang on for dear life to be transported back to the nest where they eat the pollen destined for the bee's young. I am amazed that one of these big fat insects could get enough food from this tiny species to mature into an adult let alone the many gathered here. Do they roam as larvae picking food up from a number of bee brood cells? 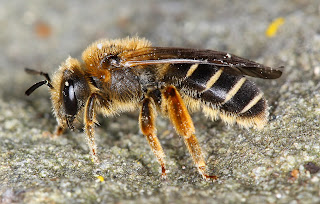 There were quite a few of this Halictus rubicundus at the very bottom of the cliff. Unfortunately I suspect this was what I saw in the middle of January and not Andrena ovatula, no photo or specimen unfortunately.This is a relatively unusual "solitary" bee as it is not solitary. Queens give rise to workers in April/May and males and new queens emerge from July to October just like any other Eusocial species. So much still to learn!
Posted by i.f.tew at 13:41 3 comments: 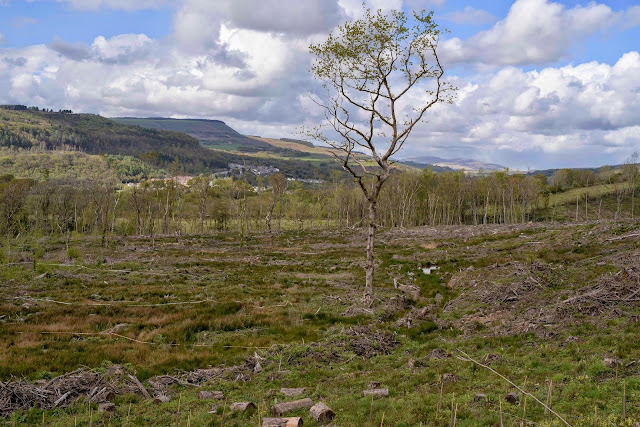 The Gnoll clear-fell area as it looks at the moment

The clear-fell area (formally Western Hemlock plantation) near the car park in Neath's Gnoll Park has undergone a significant transformation this spring. The plantation was part of the Gnoll Park replanted ancient woodland, although you would have struggled to find any evidence for its ancient woodland status when the Western Hemlocks were there. A year ago this devastated area was largely devoid of any vegetation other than pioneer bryophytes, but now, native Yellow Archangel (Lamiastrum galeobdolon subsp. montanum), a fairly good ancient woodland indicator species, is flowering there in profusion. 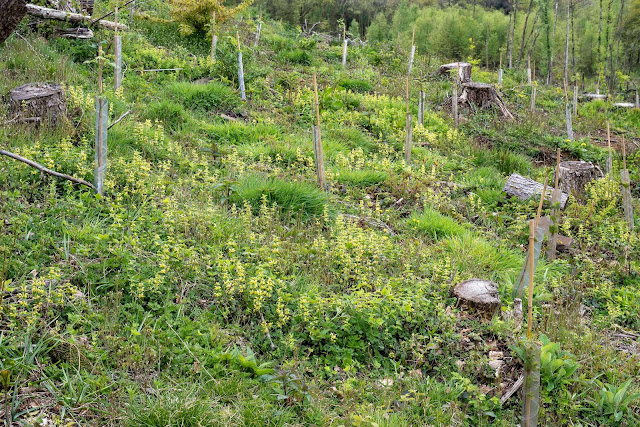 Large patches of native Yellow Archangel in the clear-fell area 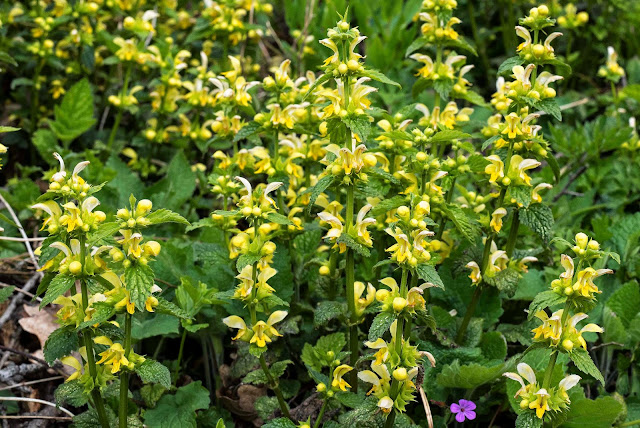 Coppiced woodland undergoes a similar transformation in the early phases of the coppice cycle, when the increase in light available to the ground flora results in the prolific flowering of woodland herbs. Other plants that are also responding in the Gnoll clear-fell area are Common Dog-violet (Viola riviniana) and Yellow Pimpernel (Lysimachia nemorum). 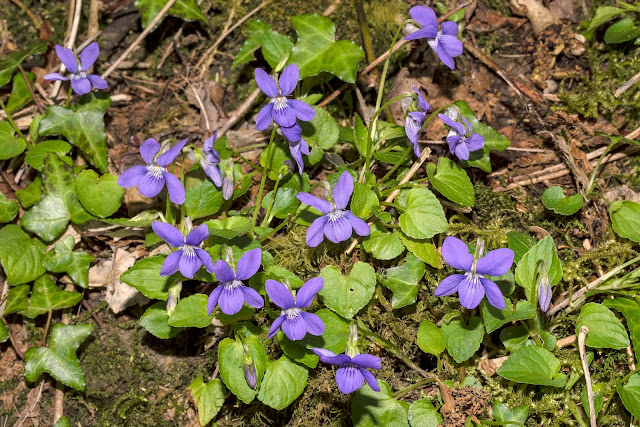 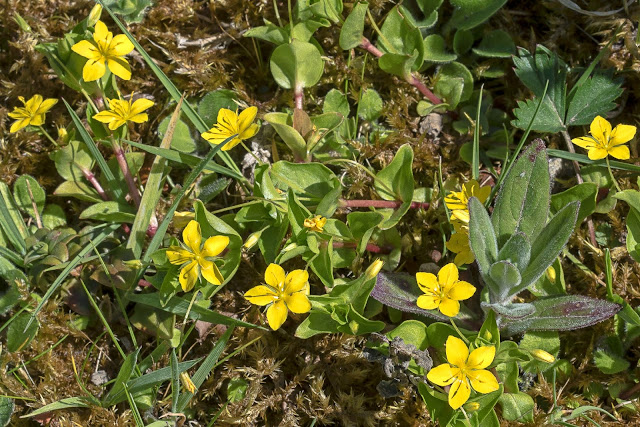 The appearance of Woodruff (Galium odoratum), which I have never seen in the Gnoll before, was a pleasant surprise. Like Yellow Archangel, it is a good ancient woodland indicator species. 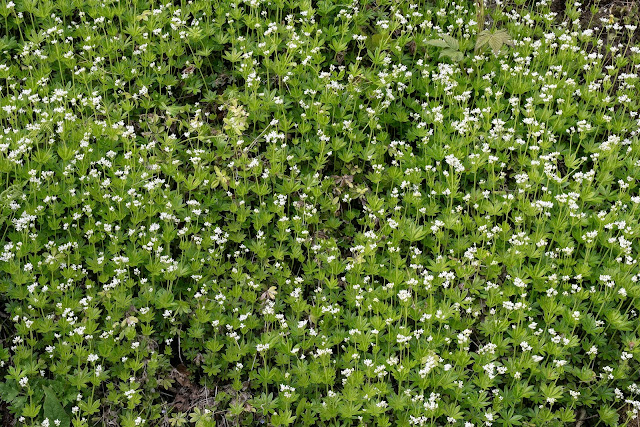 Nearby, the beech wood near Mosshouse Reservoir is putting on a spectacular bluebell display. 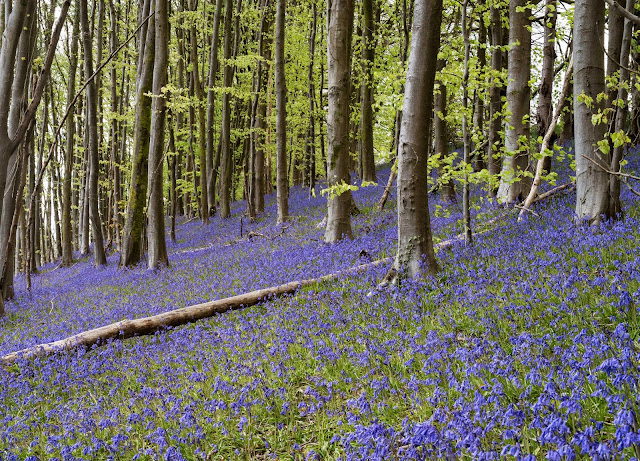 Bluebells in Gnoll beechwood
Enjoy it all while it lasts!
Posted by Charles Hipkin at 22:20 3 comments:

The new book below, published by Arthur Chater, on rusts in Wales, may be of interest to readers: 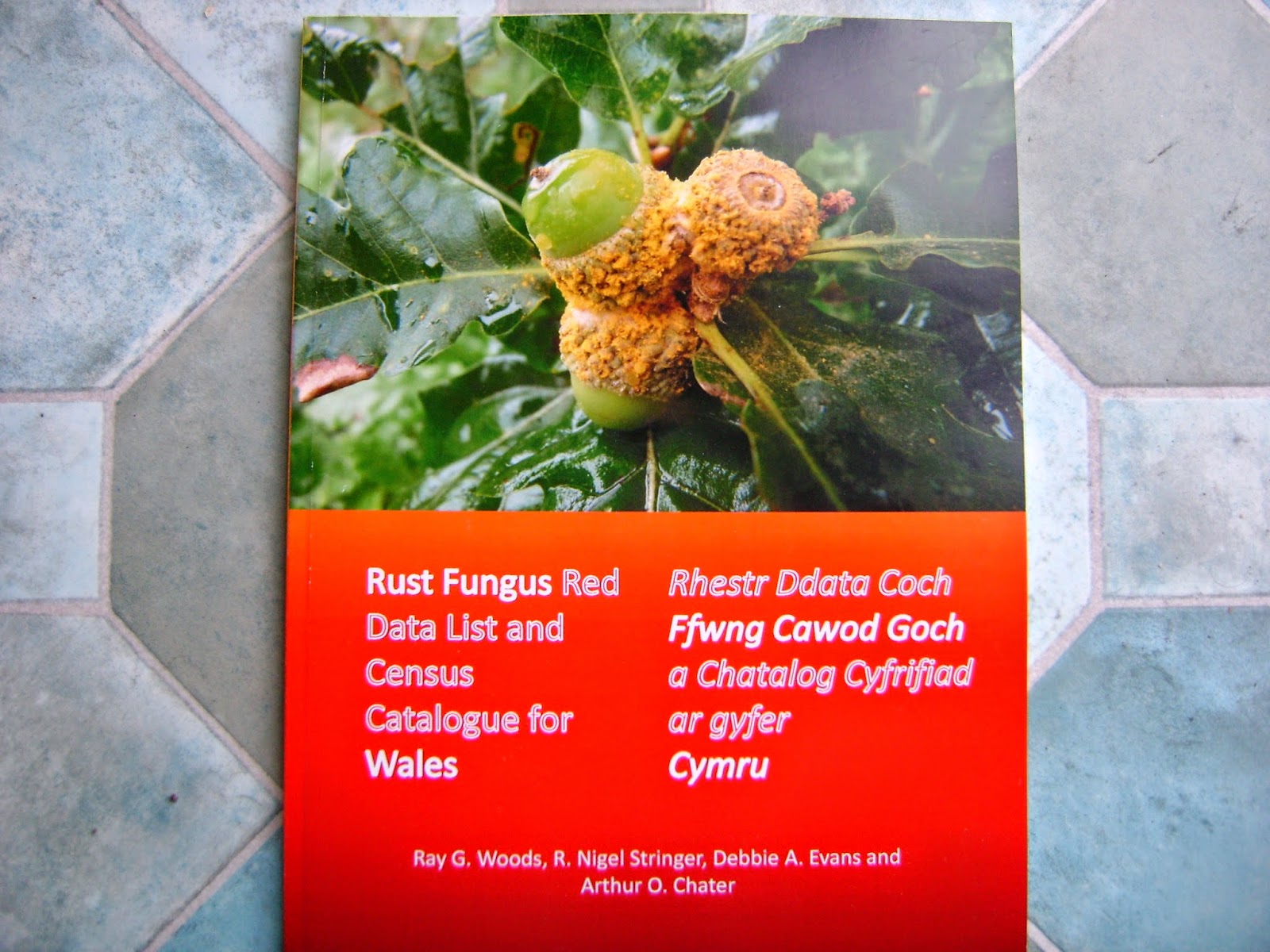 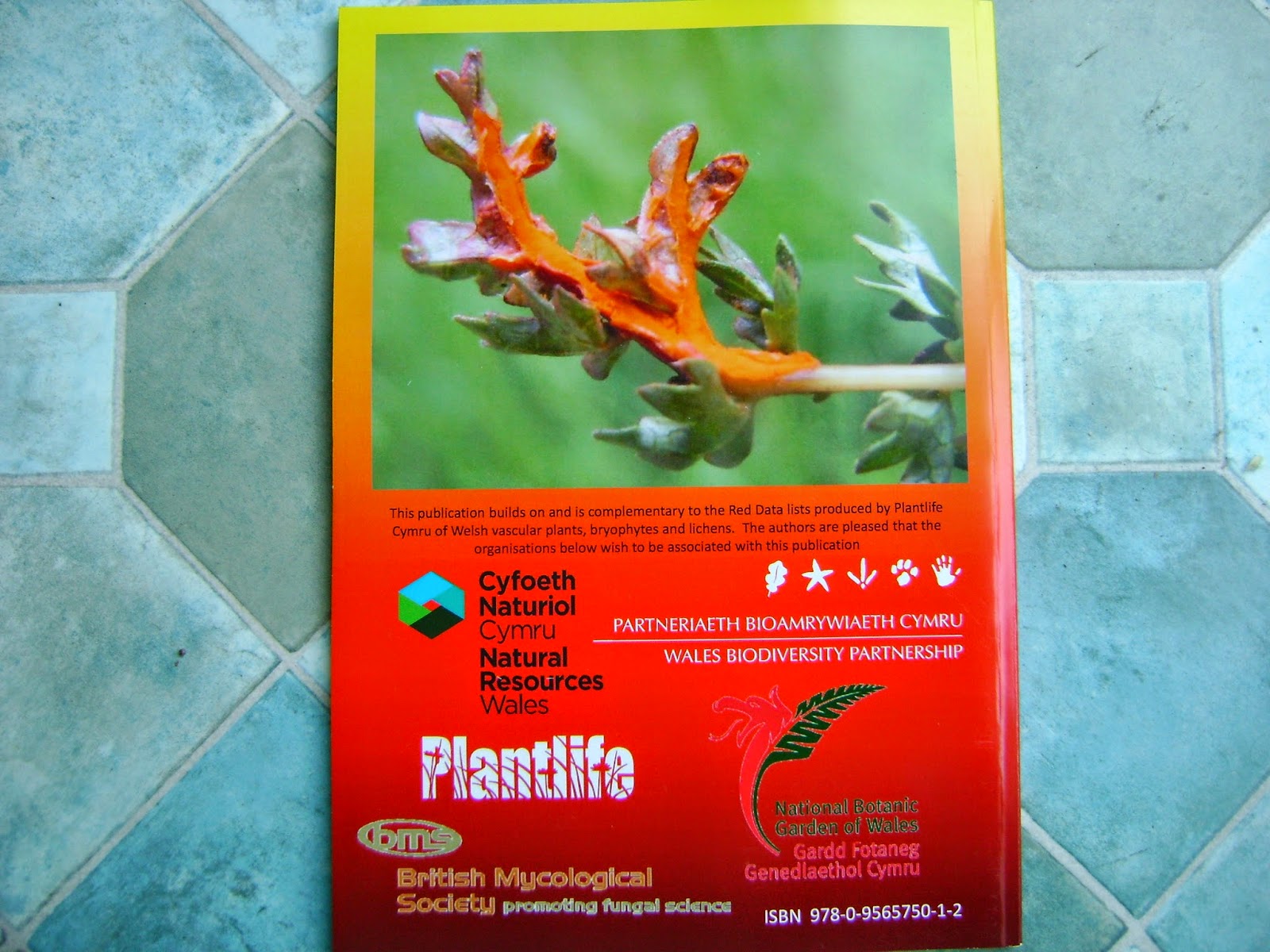 It has an interesting and informative text and many excellent photos. Rusts can be easily spotted as an adjunct to general botanising or other natural history activities and there are `good finds` to be made. Carmarthenshire is one of the better covered counties for rusts in Wales while Glamorgan is rather poorly recorded....now`s your chance to rectify matters!
PS. I forgot to mention that it can be downloaded for free as a pdf - just type in the title into `google`.

I recently visited the limestone ridge near Carmel, Carmarthenshire, much of which is now a National Nature Reserve and an area for which I have fond memories,  it being the first SSSI that I notified (with intense opposition), back in 1986. My recent visit was for relaxation rather than work and one particular plant that I wanted to see was a rather rare horsetail.
In 2003, in some wet, calcareous flushes along a path at Pentregwenlais and SW of Cilyrychen Quarry, I noticed a rather robust Equisetum variegatum, which puzzled me and I took a portion home to identify, I made it to be Equisetum variegatum var. wilsoni but there was a problem - this latter variety was only supposed to occur in SW Ireland. Advice from the National Museum Wales suggested that I was incorrect in my determination, but they kindly agreed to send the specimen off to Christopher Page (one of the best pteridologists in the UK and author of The Ferns of Britain and Ireland).
To my pleasure, he noted, "This is fascinating. Although smaller than the type, it answers exactly the exceptional smooth meristem internode of the Killarney material. I confirm it as E.variegatum var. wilsoni Newman. This must be the first record outside Ireland".
It is vital that sufficient management is carried out by NRW, to ensure that this biographically important population is not lost to scrub encroachment.
There is already an Irish flavour to Carmel Woods, with its `turlough` (ephemeral lake on limestone) at Pantyllyn - the only formally recognised UK example - and another taxon with a south-westerly (`Lusitanian`) hint is the rare harvestman Sabacon viscayanum subsp. ramblianum. It occurs deep in damp, humus-rich block scree at Carmel (and also other sites on the Carmarthenshire limestone), as well as under loose rocks in damp gorges elsewhere. In the past it was suggested to be an introduction, after it had been initially found on Gower and near Cardiff, as it was near some man-modified sites (quarries etc). I refute that assumption - in my view it is typically a species of rocky `cwms`and other persistently damp places and again one of an assemblage of organisms that perhaps colonised the British Isles via a western route along the Atlantic seaboard (rather than the over depended on Dover/SE England/North Sea routes). Incidentally, `Viscayana` (as in Sabacon`s name) was a Roman province of northern Spain - this harvestman was first described from a cave in the foothills of the western Pyrenees. This western Pyrenees/Northern Spain Basque country is now believed to be also the origin of much of the earlier human colonists of Britain - the older genetic groups that achieve greatest incidence in Wales and, more particularly, Ireland.
I too must have `an Irish touch` (but not genetic affinity!) as, about twenty years ago, I was again lucky enough to find another first UK record (outside Ireland) - the woodlouse Oritoniscus flavus, found at the edges of wet ditches at Llwynhendy/Bynea (c N of WWT Penclacwydd). It has subsequently been discovered at a locality in SW Scotland, as well as the long-known populations in Eire. 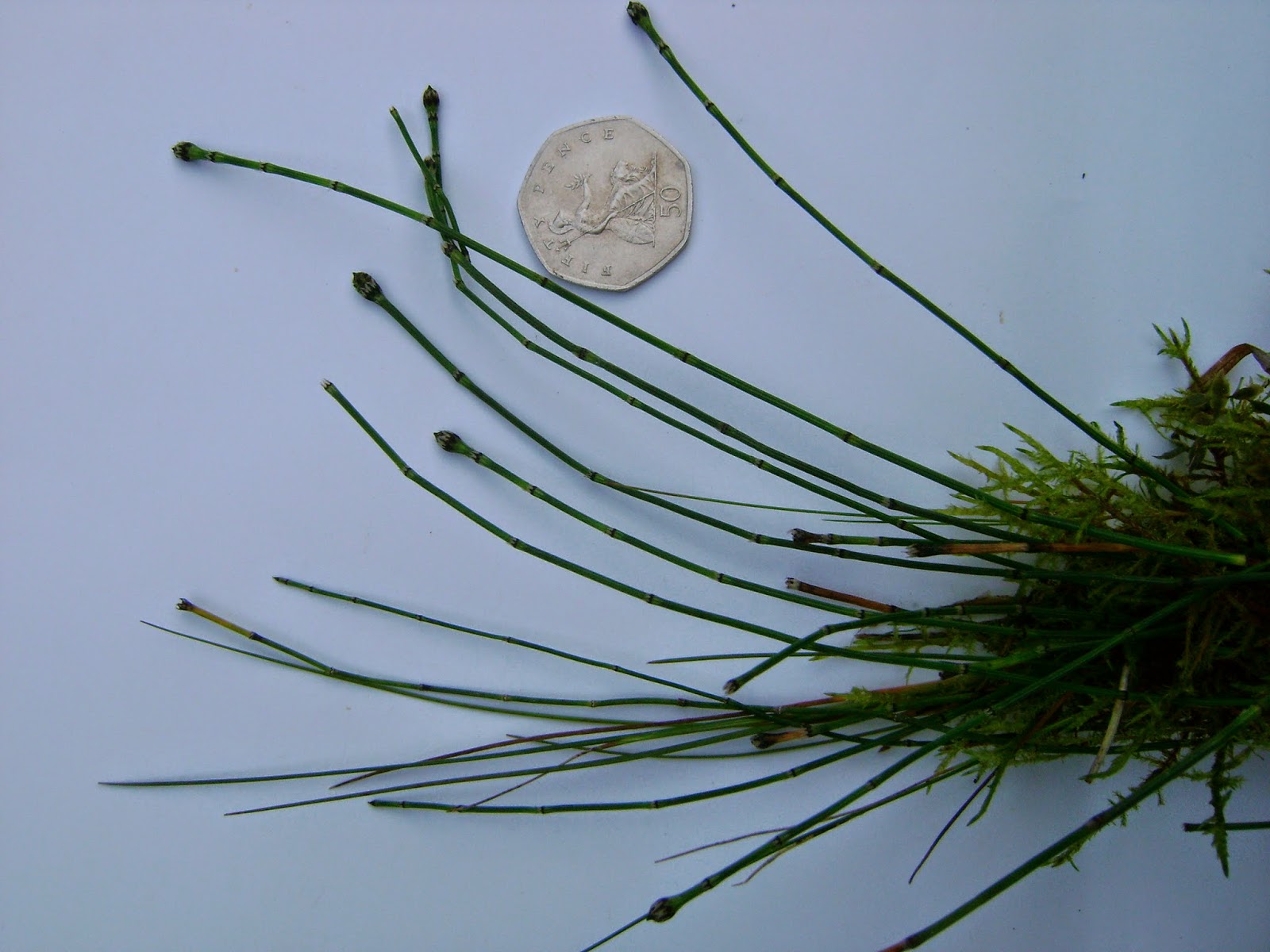 Above: the Carmel horsetail. Click on the photo to enlarge.
Posted by Ian Morgan at 13:52 5 comments: