common things in the garden

Gradually getting to grips with things I'd expect to see in the garden although today's much needed rain will slow down finding much more for now. Caught up with a few more Bumble Bees. 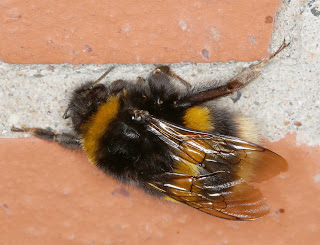 This is a queen of the Buff-tailed Bumble Bee Bombus terrestris which shows the buff tail, warming itself on the wall. The workers have a white tip to the tail and are essentially indistinguishable from the group of species now making up what was the White-tailed Bumblebee Bombus lucorum. 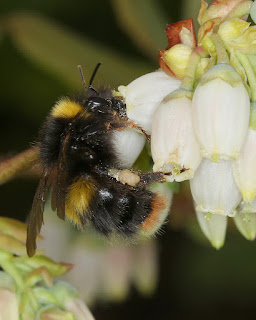 Much smaller is the Early Bumble Bee Bombus pratorum which by virtue of starting early and being small can have 2 generations per year, at least in the south of the UK. Males can appear as early as April. 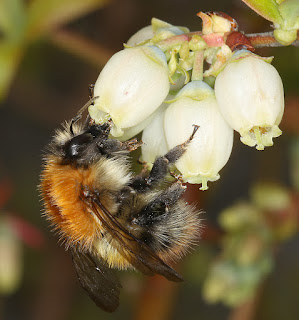 Lastly is the Common Carder Bee Bombus pascuorum a late starter and recognised, in normal suburban gardens, by having a brown topped thorax and no white tip to the tail. This is one of a group of bees called pocket makers because they make a pocket alongside the larvae into which they place a mix of pollen and nectar. The other bumblebee type places this mix in pots away from the larvae and the workers carry it to them. The name carder is used because they comb material to make a soft insulation for the nest. There are also a group of parasitic bumblebees who invade the nests and kill the queen and make the workers rear their young, they tend to be less common and fly later in the year as they need an active nest to parasitise.
On our Rosemary plant I came across an Early Bumblebee fallen victim to a crab spider Misumena vatia 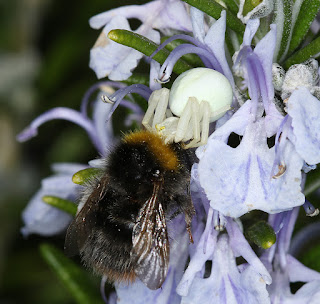 From this pose it is easy to see why it is called a Crab Spider. 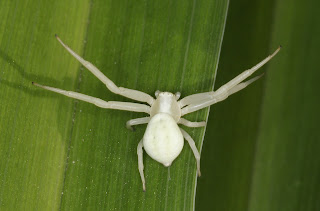 The colour can vary from white to yellow and even pink. 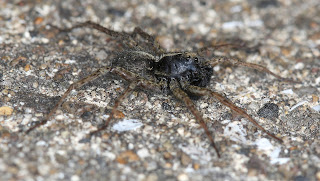 This male (because of the large palps in front of the face) Wolf Spider, Lycosidae, I identified as Pardosa amentara by examining the underside of the palps. 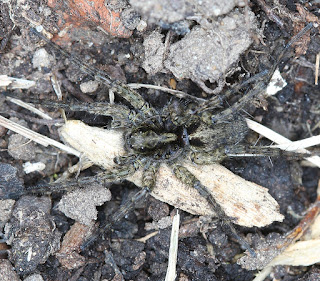 I had decided before that this was the female of the same species based on her appearance, not a very reliable way of identification. There are large numbers of these running around in my lawns, not bald green bowling green lawns!
In the bushes are small webs with this green spider which I can only put down as 1 or the other of Araniella opistographa or cucurbitina without trying to key out a specimen. 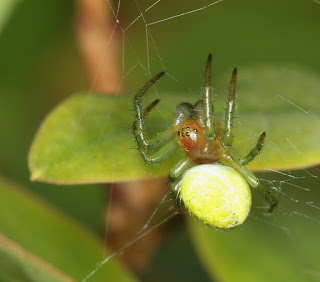 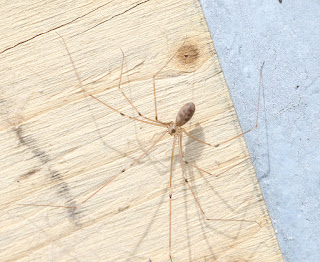 many of whom will come indoors at the end of the year. A much more attractive spider can be found lurking in the dark, often under tightly stuck stones or in cracks. This animal is nocturnal and is called the Woodlouse Spider Dysdera crocata. 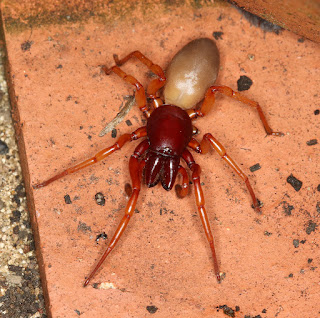 Not surprisingly, given its english name, it feeds on woodlice of which there are a vast number in my garden. To penetrate the hard carapace of the woodlice the spider has very sharp and strong chelicerae meaning it is one of the few spiders in this country that can give you a nasty bite.The main woodlouse in my garden is Porcellio scaber identified to genus by the 2 segments to the flagellum of the antenna. The flagellum is the final most flexible part of the antenna and is shown in more detail in the small vignette included. 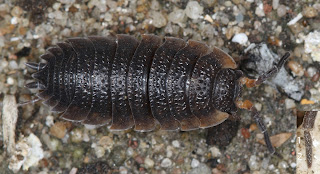 The adult woodlouse is mainly grey but younger animals exhibit varying amounts of reddish or orange areas, as seen here. 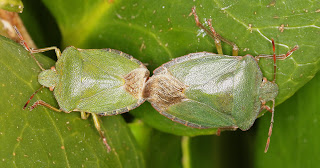 Bugs, Hemiptera, are represented most commonly and easily identified by the shield bugs. This is the Green Shieldbug Palomena prasina sitting on bushes everywhere and doing what comes naturally as you see here. Hemipterans have a sucking proboscis like a hypodermic needle for sucking plants, animals and occasionally both.They are not specialist feeders and suck from a wide variety of bushes and trees including fruit, unfortunately. This next is the Sloe Bug  Dolycoris baccarum which does feed on Sloe bushes but also a wide variety of other trees and bushes. 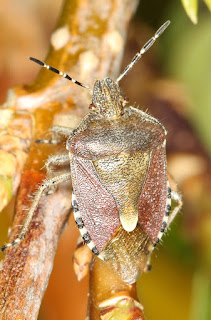 If you have trees in or around your garden you will also probably find this species, the Hawthorn Shieldbug Acanthosoma haemorrhoidale which, again, does feed on Hawthorn but also a wide variety of other species. 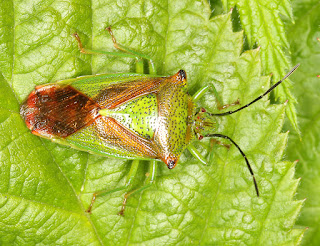 Since I have no books on the subject I have relied on the excellent britishbugs.org.uk to try and identify 2 further species which I present as tentative identifications. First is a Lygaeid, Drymus sylvaticus 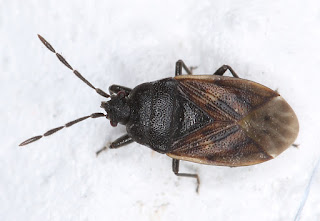 and, secondly, a mirid Stenodema laevigata 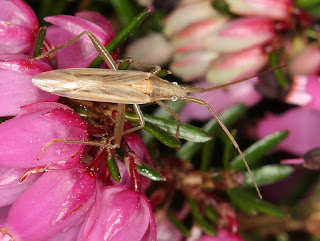 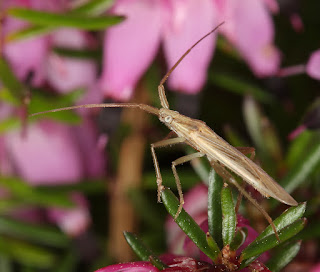 Maybe.....if anyone has a view please let me know. Lastly are a group of hoverflies, syrphidae, not quite so problematic in the identification but there exist some which are.
Firstly is probably our commonest and well known hoverfly the Marmalade Hoverfly Episyrphus balteatus. 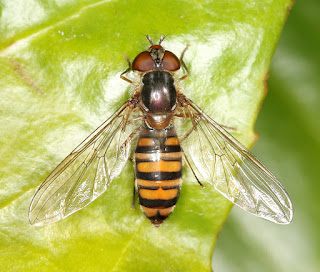 This female (eyes not touching) has quite the normal amount of orange, but they can be found with much darker colours and even silver bands if the temperature at which they developed is lower. They are wasp mimics and due to the larval diet of aphids are a help in keeping our crops aphid free. 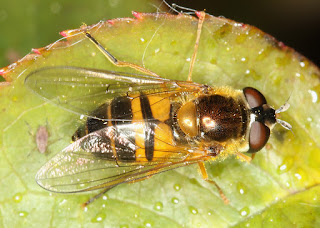 This female is another aphid feeder, this time of fruit and other trees Epistrophe eligans. 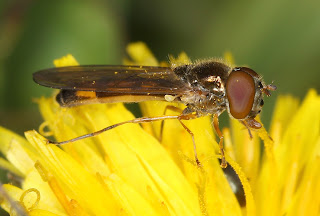 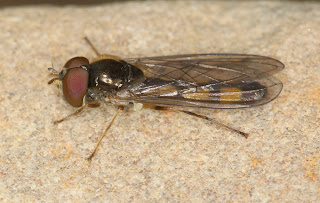 Very common in grassy areas is Melanostoma mellinum (a male this time) whose larvae are also aphid feeders but now in the grasses or down in leaf litter. As adults this species often visits supposedly wind pollinated plants like Plantains and contributes to their pollination as well as feeding on the pollen. Lastly is one of the archetypal hover flies found hovering a lot in many habitats. Known as Drone Flies because of a resemblance to male honeybees this genus is Eristalis and is found throughout the spring and summer but may be most apparent in autumn busy at the flowers of Ivy. 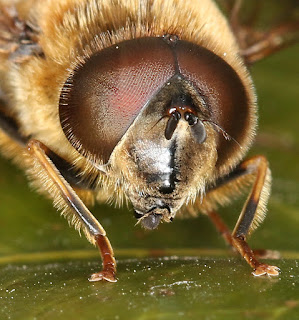 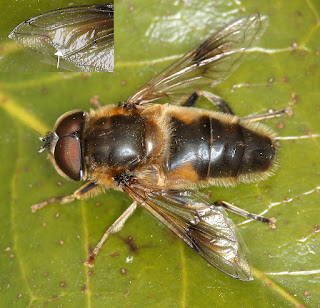 This is Eristalis pertinax, a male because the eyes meet at the top of the head and the species because of the yellowish tarsi and the narrow black stripe on the front of the face defined by 'dusting' either side of it. The larvae in this case are the rat tailed maggots found in nutrient rich waters or farmyard drains.
Lastly for this post is a female (by the relatively straight 'pincers' at the rear tip) earwig Forficula auricularia which feeds on plant and animal matter. A nuisance to my Dahlia growing neighbour when I was a kid, a plant pot placed upside down on the supporting post somehow helped. 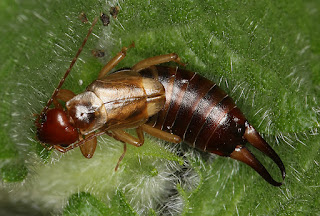 Unusually for insects the female lays a relatively small number of eggs, licks then to keep them clear of infections and guards the young until independence.

I want the world to know a great man that is well known as DR.WEALTHY,he has the perfect solution to relationship issues and marriage problems. The main reason why i went to DR.WEALTHY was for solution on how i can get my husband back because in recent times i have read some testimonies on the internet which some people has written about DR.WEALTHY and i was so pleased and i decided to seek for assistance from him on his email (wealthylovespell@gmail.com) which he did a perfect job by casting a spell on my husband which made him to come back to me and beg for forgiveness.I will not stop publishing his name on the net because of the good work he is doing. I will drop his contact for the usefulness of those that needs his help.His Email DR.WEALTHY"CONTACT via EMAIL: wealthylovespell@gmail.com or whatsapp him +2348105150446 read blog http://wealthyspellhome.over-blog.com