Since it isn't possible to go out and look for stuff now, I thought it would be fun to look in the garden and see what I could find. Most will be pretty run of the mill stuff but, knowing wildlife, I'm sure some surprises will turn up especially if I can do things with groups I've not bothered with much.
On a familiar note for me, the nice weather has brought out the Bees and Wasps. In fact as you will see it is already too late for the first brood of some species! 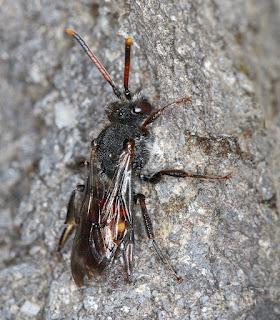 This is a female of Fabricius' Nomad Bee (Nomada fabriciana) which is searching the areas of bare earth looking for nests into which to lay its eggs. The female antennae are very distinctive used together with the red, black and yellow colours of the abdomen and small size. This species is a cleptoparasite. The female lays her egg in the host burrow and the first instar larva consumes the host larva and then grows up on the host pollen stores. In my garden it probably lays in the nests of Gwynne's Mining Bee (Andrena bicolor) of which there is currently no evidence. Here is a picture taken last year in February high up above Resolven and feeding on Coltsfoot flowers, about the only flowers present at the time. 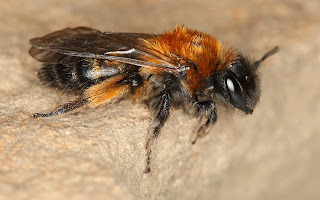 The main bees flying currently are Chocolate Mining Bees (Andrena scotica). There is lots of activity along hedge lines with sunbathing on the leaves of Cherry Laurel and Privet. It is amusing to see the males whizz past a female sitting just inside the hedge line, but in the sun, without detecting her. Presumably there is no scent involved? This is the female bee, of Honeybee size: 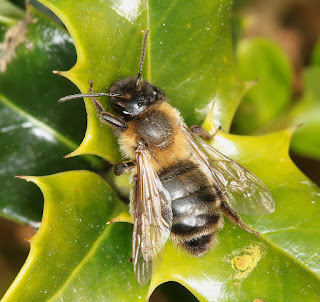 and this is the male bee: 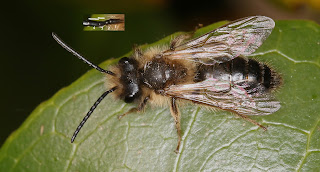 Click on the image to make it full size and you will see the inserted detail of the antenna which has segment 4 roughly twice as long as segment 3. Afraid this is the kind of detail you need to identify (only some) bees from photographs. This bee visits a wide variety of shrubs and trees, the females to collect pollen for storing to feed the young. Both males and females visit flowers (sometimes different species to those from which the females gather pollen) to sip nectar. Here is a male helping himself to nectar from my Damson flowers and hopefully carrying out some pollination as well. 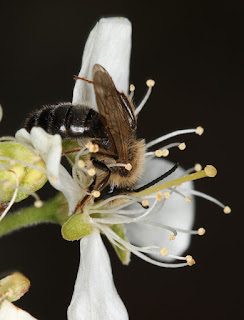 I noticed a couple of individuals with something sticking out between the segments at the end of the abdomen. 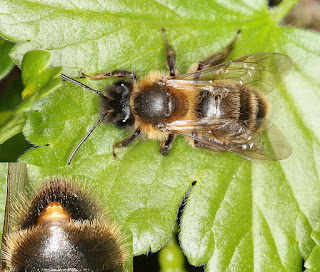 This is the female pupa of a Stylops, a strepsipteran, thought originally to be parasitic forms of beetles but now placed apart. The adult female produces larvae called triungulins which sit on flowers and attach themselves to visiting bees, get taken back to the nest and develop inside the bee larva. Often this parasitism causes an intersex bee to be produced but I also noticed a male similarly parasitised: 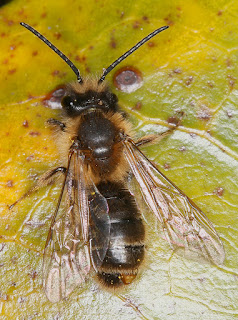 The male Stylops is very rarely observed so I'll keep and eye out. He can fly and mates with the females by injecting sperm via her neck.
That's not the only problem for the Chocolate Mining Bee, there is also a cleptoparasitic bee, Marsham's Nomad Bee (Nomada marshamella) laying in its nest: 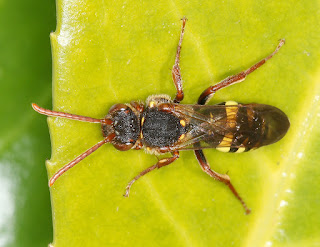 More pollination of my fruit was occurring by the Tawny Mining Bee (Andrena fulva) visiting the Gooseberry flowers. Fortunately this one is easily identified: 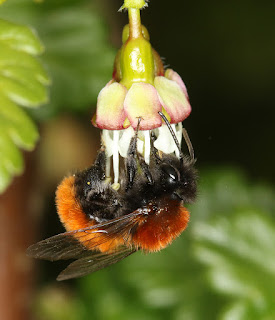 Unlike the males who were patrolling and visiting my Damson flowers: 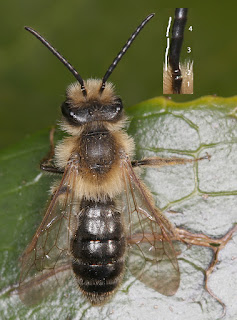 Once more if you click on the image you will see the inserted vignette shows the  3rd antennal segment is now about twice as long as the 4th. This species male is also one of those with a large spine sticking down from the mandibles as shown here in an older photograph: 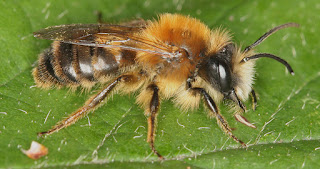 Enlarge, look below the eye when you will see the mandible sloping down to the right and the spine coming off the base at right angles to the left.
A much less numerous bee in my garden is The Buffish Mining Bee (Andrena nigroaenea).The Honey Bee sized females are quite distinctive as they have black hairs at both ends, on the face and final abdominal segment and brownish all the way in between. 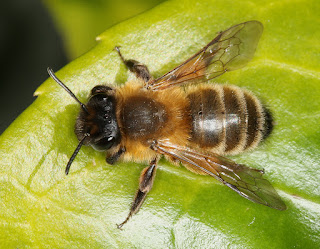 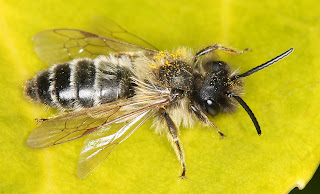 This one is older and somewhat faded, they can be quite a rich orange brown. Marsham's Nomad Bee will also parasitise this species.
A volcano of soil in lawns or, in this case, at the base of a wall reveals the presence of The Common Furrow Bee (Lasioglossum calceatum) most probably, because it has a related but less common bee Lasioglossum albipes which is very hard to tell it from even with the aid of a specimen and microscope. 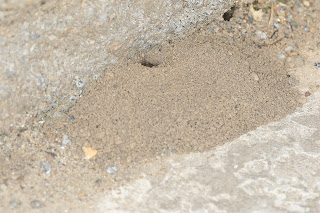 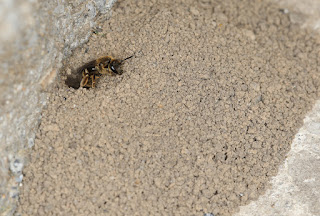 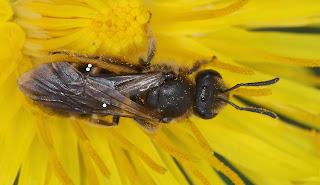 In the bottom photograph, when enlarged, by the single white dot you can see the basal vein suddenly curves and meets the longitudinal vein at about 90 degrees unlike the Andrenas above where the two veins meet at a shallow angle. At the 2 white dots you can see the hairs emerge from under the previous segment, a way to tell this genus from another called Halictus. The common name of Furrow Bees comes from the fact that the final dorsal abdominal segment of the females has a furrow.
The final Bee to mention in this post is a bit of a nuisance around the house because it nests in holes which is only a problem when they are the drainage holes in doors and windows, particularly wooden ones as they encourage damp and rot. Nevertheless, it is a very attractive bee and a pleasure to see: 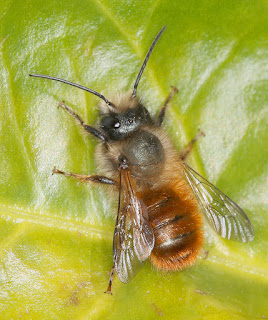 This is the male of the Red Mason Bee (Osmia bicornis) and like all males is very busy patrolling and checking out all the local holes for females. 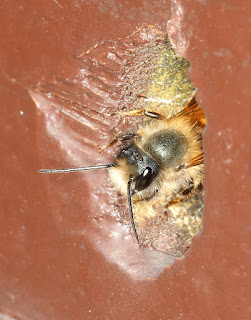 The name bicornis comes from the two horns found on the female face, used for handling the mud from which individual cells are built for each young and its food. Here is an old picture of the female face: 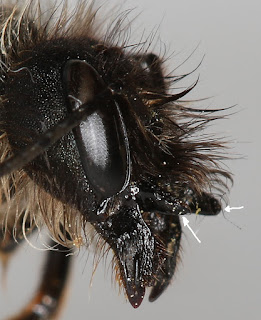