first reward from the garden work

A number of insects have landed in front of me during the last few days causing a fair bit of eyebrow raising. The first of these was very interesting as the next group I wanted to work on when I had time was the Sawflies: Symphyta, waistless members of the Hymenoptera whose larvae are plant feeders. A shiny bronze metallic member of this group appeared atop the Cherry Laurel hedge allowing one photograph from a poor angle but enough to stimulate interest. I realised it was probably a member of the Cimbicidae because of its size and clubbed antennae. Fortunately I already had enough keys to get it to Genus Abia and a search of the interenet produced a set of online keys which showed me it was lonicerae named because the larvae feed on Honeysuckle Lonicera. A search of my Honeysuckle over the next couple of days revealed a couple of individuals who permitted better photos to be obtained. I felt relieved that, after strenuous efforts last year to remove Honesuckle which was spreading all over my garden and lawn, some survives in one corner which will now not be removed.
It may well be under recorded but a search of NBN gateway revealed a few scattered dots over much of the british isles. My experience of thinking I've found something new and interesting is often followed by revelations that it is simply under recorded or not yet mapped. I suggest, if you are interested and have some, you check out any Honeysuckle you can currently get at. There is another species of honeysuckle which may be rarer but is black and white....
As you can see here it looks as if this was a female trying to penetrate the leaves with her ovipositor unless I've got a lot more to learn than I think. 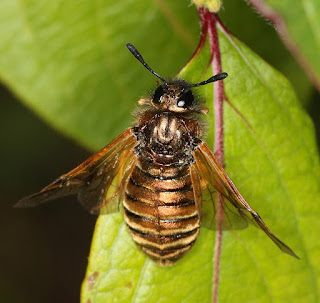 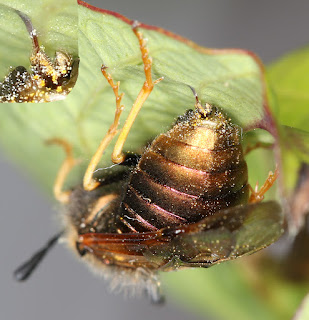 Another surprise this week turned up on my house wall. This is The Slender Groundhopper (Tetrix subulata) and lives in waterside areas. Interestingly I have only ever seen it's relative Cepero's Groundhoppr (Tetrix ceperoi) in the Swansea and Gower area and I have no idea why it should turn up on the side of a house in Tycoch. 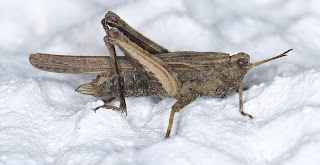 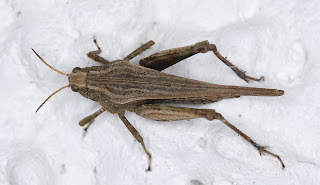 On the wall inside the house was a Twenty Plume Moth (Alucita hexadactyla), 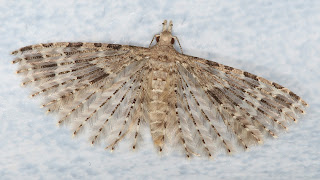 slightly less surprising and equal in number to an effort at moth trapping on a warm but clear night with winds coming from spain. The only reward in this case was a Hebrew Character (Orthosia gothica). 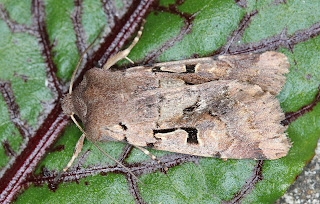 A type of Blood Bee (Sphecodes sp.) also turned up on the wall but this will not be identifiable from a photograph as identification relies on microscopic features and is quite challenging. 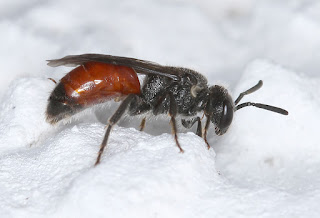 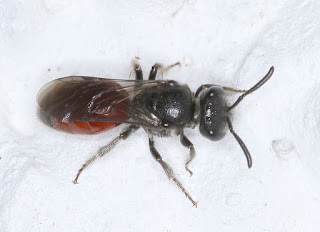 These are cleptoparasites of solitary bees and there are currently 2 species flying in the garden told by size checking out Andrena and Lasioglossum nests in bare soil areas.
The final wall dwellers are common small spiders without english names I can find. The first is a 'Jumping Spider' Salticus scenicus, this is a male with big black chelicerae. 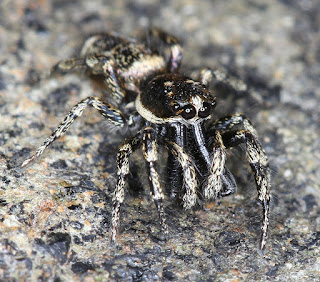 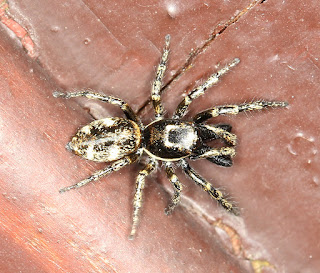 The second is also a male, Xysticus cristatus a type of 'Crab Spider' 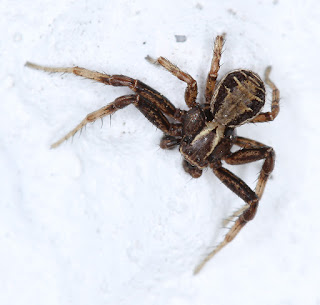 The female was found in the rear lawn in bare areas 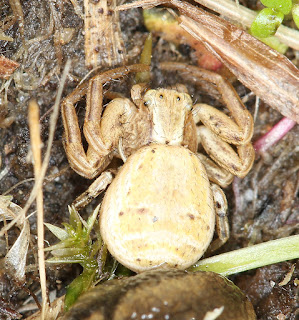 Please feel to comment if you disagree with my spider identifications as I am no expertise in this area and am happy to learn.

No worries on the Sawfly, well worth looking for on Honeysuckle or Snowberry because according to the facebook sawfly group it is turning up all over the place this year. Without a specimen it is likely to remain as Abia lonicerae agg because detail not easily seen is needed to differentiate it from the other, rarer species.

I want every herpes patient to please read my testimony, my name is SARAH MORGAN and I am from California in the USA, I contracted genital herpes from my ex boyfriend who never had any symptoms. I have had it for 4 months now., and it has affected my life. I have told my boyfriends who I trusted about it and I have never had a bad reaction, it has affected my new relationships with Smith and people think herpes is really a minor skin irritation herpes has a long term effects on health. The stigma attached to this virus by ignorant people is ridiculous. Most people have herpes in one form or another. I would like to advise people on how I get rid of my herpes and I was reading a comment on the internet,and I saw a testimony posted by a woman from Germany that she get rid of her herpes with the help of DR AHKIGBE and so I was so happy when I saw that post, that his herbal medication is free and I quickly collected the herbal doctor email and I email him within 3 hr he respond to my email and I explain things to him he told me not to worry that he is going to cure me totally with his herbal medicine he only request for little money that he will use to buy the items for the preparation of the herbal medicine, wish I send to him because the pain was too much for me to bear and after some days he told me that he has prepare the herbal medicine, that I should send him my address that he want to send it to me via DHL or FED-EX that was how I got the herbal medication and I use it as I was told and after few days I found out that my herpes was no more, i went to hospital for confirmation and it was true really that was how i got my cured. DR AKHIGBE also cure other deadly diseases like,  HIV/AIDS, HERPES, DIABETES,CANCER, ALS, ASTHMA, WEAK BODY,  HEPATITIS A&B, DENGUE FEVER, RABIES, MARBURG  DISEASE, THYROID,  HYPEROPIA, SMALLPOX, ARTHRITIS, MENINGITIS ,LUPUS, EPILEPSY, CHRONIC DISEASE, DICK AND BREAST ENLARGEMENT, MALARIA, BACTERIAL DIARRHEA HEART DISEASE., JOINT PAIN, STOMACH PAIN,  DENGUE SCHIZOPHRENIA, POLIO,MULTIPLES SCLEROSIS, HIGH BLOOD PRESSURE,  SORENESS/INJURY,  VAGINAL  DISCHARGE,  CHANCROID, DEPRESSION, TUBERCULOSIS, ALZHEIMER , PENIS ENLARGEMENT, VAIN, PARKINSON'S, to get your rid kindly via his email:   drrealakhigbe@gmail.com    contact his number:  +2349010754824           website:  https://drrealakhigbe.weebly.com       you can still write me on Instagram to get more information. on Sarah Morgan 06.

InFebruary 2017, my immune system was not functioning correctly and my primarycare physician did a N.A.E.T. Treatment with Laser Acupuncture andAuricular Acupuncture to try to desensitize my body from the differentallergies and allergies to the metals. This procedure began to make me drained and very fatigued.  He recommended that I have a GI Stool testdone as I was having GI issues in February 2017, to check for parasites,pathogens, bacterial flora, and fungi/yeasts. The results showed that I had a Bacterial Pathogen called Salmonella,high amounts of normal bacterial flora, called Enterococcus spp. andEscherichia spp., 2 parasites called Dientamoeba fragilis and Endolimax nana, and2 types of fungi/yeasts called Candida spp. and Geotrichum spp.   The doctor recommended that I take Dr Itua Herbal Medicine to get rid of the Candida as that was the main concern at thetime and I did purchase Dr Itua Herbal Medicine and after taking it all as instructed I was totally cured so is a urged form of heart to believe in herbal medicines but yes indeed natural remedies should be recognize around the globe because is the only healing that has no side effect on each every healing, I will recommend anyone here with health challenge to contact Dr Itua Herbal Center on E-Mail  drituaherbalcenter@gmail.com he capable of all kind of disease like Cancer,Hiv,Herpes,Parkinson,ALS,Copd. with a complete cure without coming back.

As a sign of gratitude for how my husband was saved from Lymes, I decided to reach out to those still suffering from this.
My husband suffered from Lymes and it was really tough and heartbreaking for me because he was my all and the symptoms were terrible, we tried various therapies prescribed by our neurologist but none could cure him. I searched for a cure and I saw testimony of so many people who were cured from Lymes , and so many others with similar body problems, and they left the contact of this doctor who had the herbal cure to Lymes. I never imagined Lymes had a cure not until I contacted him and he assured me my husband will be fine. I got the herbal medication he recommended and my husband used it and in one months he was fully okay even up till this moment he is so full of life.Lymes has a cure and it is a herbal cure contact the doctor for more info on drituaherbalcenter@gmail.com Dr Itua can cure Herpes,Hiv,Cancer,ALS,Copd,HPV,Lupus,MS,Diabetes, and other disease talk to Dr Itua on how to get the medication. Thanks for reading my testimony .