This amazing weather continues to draw me out of doors into my garden and so the posting of pictures falls behind as usual.
Wherever colonies of solitary bees exist there are normally Bee Flies, in this case the Dark-Edged Bee Fly Bombylius major at work flicking eggs onto the soil in the vicinity of nests. The larvae crawl into the next and live as parasitoids. These bees often indicate the presence of a bee colony before the bees themselves are seen 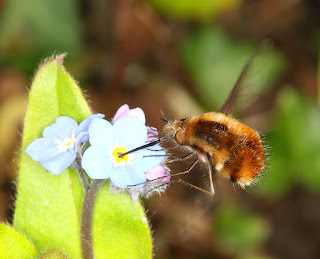 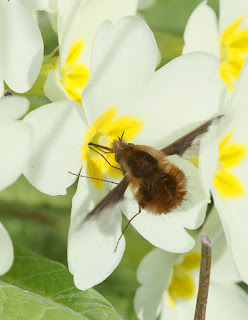 These flies are refilling with energy at flowers, hence the unfeasibly long proboscis. Here are a few more species of hymenoptera landing within photographic range. This is a male Hairy-Footed Flower Bee Anthophora plumipes  and is named for the long hairs you can see here arising from the legs. In spite of being as big as small bumble bees this is still a solitary bee i.e. without a worker caste. The word solitary, used with solitary bees and wasps, does not apply to the numbers or density of nests, hundreds or even thousands may be found together or even inside a single communal entrance, e.g. a rabbit burrow, many separate nests may be found. 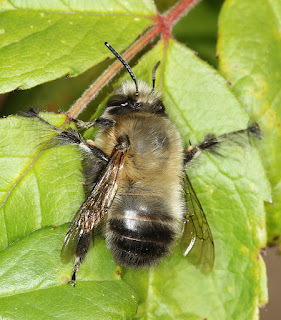 This is the female Hairy-Footed Flower Bee Anthophora plumipes which as you can see is all black but with red haired hind legs. It has a relatively long proboscis designed for probing long necked flowers like these of Blueberries. 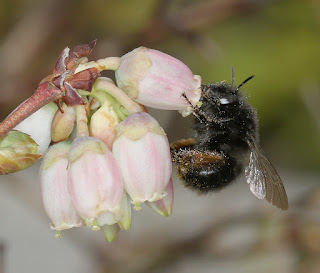 On the other hand this bee is tiny, almost certainly The Green Furrow Bee Lasioglossum morio.  The females fly from March to October, only being joined by males from June onwards. In spite of being tiny (4mm or so long) this species is not a solitary bee, having a worker caste in small numbers. As is usual in nature habits do not necessarily follow our attempts at taxonomic organisation. 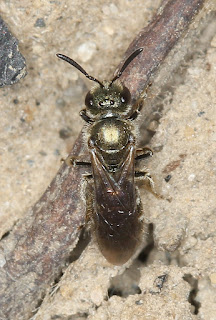 Another mining bee, The Grey Patched Mining Bee Andrena nitida  is easy to identify in the female case. The orange thorax and shiny black abdomen are also found in the Cliff Mining Bee Andrena thoracica but the white hairs, particularly on the underside and legs show this is nitida. 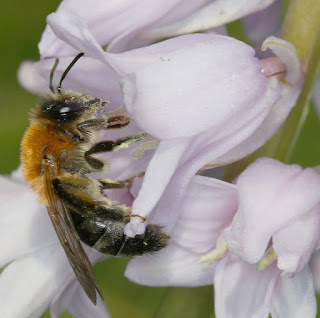 A truly social bee now. The Red-tailed Bumble Bee Bombus lapidarius is a common spring species when the queens are on the wing looking for suitable nest sites. The queen rears the first young herself by going out foraging but then stays in the nest after enough smaller workers are produced. Once the colony has got going well new queens and males will be produced. Only the new queens will survive the next winter. A social wasp, the queen Common Wasp Vespula vulgaris, of great benefit, until the colonies break up, because it is carnivorous. Like the Bumble Bees, only the queens survive the winter. 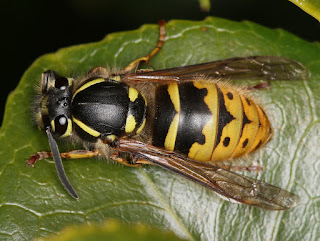 If you look at the mandibles in the photo below you can see there is no space, the malar space, between them and the eyes. In the third photo, when enlarged, you can see long pale hairs on the first segment of the gaster (the back part after the waist) and the yellow band running just behind the eyes is broadly interrupted by black. 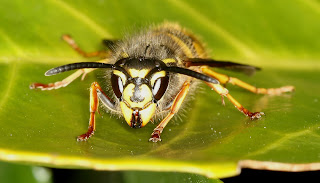 More interestingly, this third photo shows the insect collecting something exuded by the glands of Cherry Laurel leaves, be it wax, water or sugar... I seem to remember posting something about this a long time ago and have seen many hymenoptera  visiting for this benefit whatever it might be. 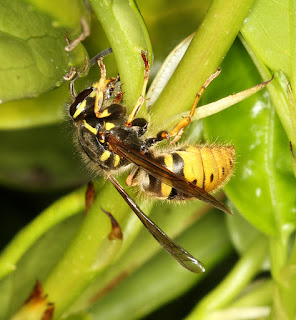 Among our loveliest beetles are the ladybirds and 3 species have emerged in the garden so far. The Seven Spot  Coccinella septempuctata is probably the most popular, a very useful insect in the garden being an aphid predator. 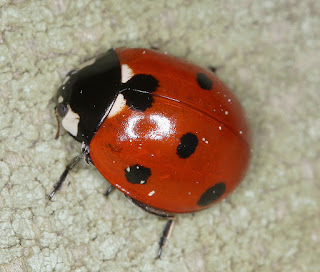 Likewise with this Fourteen Spot Propylea quattuordecimpunctata, a help to the farmer if left to mop up the aphids but like all predators the population is controlled by the food numbers and so there is a lag in their numbers behind that of the prey. 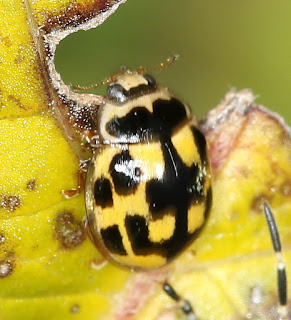 The Harlequin Ladybird Harmonia axyridis is a recent arrival (2003) which has spread very rapidly across the UK. It is a large, beautiful and very variable species. This is the commonest form succinea.  Because of its size and habit of feeding on other insects as well as aphids it was thought to be a threat to other ladybirds. As a common and widespread newcomer it is likely to cause a shift in numbers of other species, including ladybirds, but only time will tell how it settles down into the UK fauna. 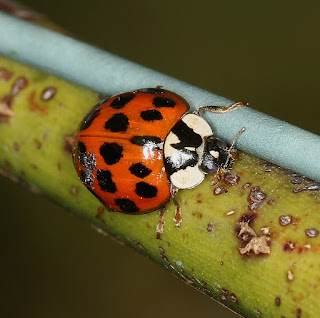 I am not normally an inveterate turner of stones and logs but this is a good thing to do if the shelter is replaced exactly as it was and can reveal a whole suite of things not seen otherwise. This is a nocturnal predatory Ground Beetle, The Black Clock Pterostichus madidus which, as you can see, sometimes has red on the legs as well as rounded rear tips to the carapace and paler tips to the antennae and palps. I have seen it gathered in 10s under logs in some situations. 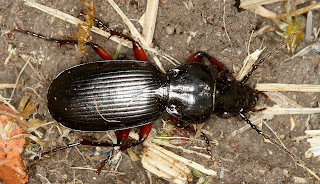 Also common in my garden are centipedes and millipedes (Myriapoda). Centipedes have one pair of legs per segment and millipedes 2. This is a standard centipede of the genus Lithobius which will not key key correctly in my guide so may well be an immature, time will tell. 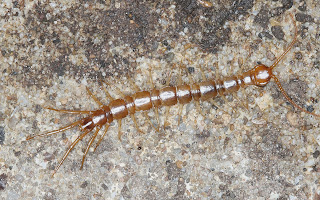 This is a more fantastical beast called Stigmatogaster subterranea common in the southwest but found up as far north as Scotland. Hard to tell but the head is to the right!

Centipedes are carnivorous but millipedes are not. This is what I think of as the archetypal millipede, which I cannot identify as I have no guide as yet. 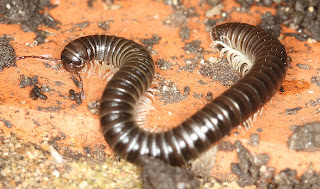